While the various soundtracks for the Metal Gear series have been praised for their cinematic quality, high production values, and memorability, it is no doubt the vocal themes which have attracted the most popularity among fans. Since the series’ groundbreaking 1998 entry Metal Gear Solid for the original PlayStation, it’s been an expected tradition for each game to include songs which encapsulate its respective themes and messages. As a tie-in for the release of Metal Gear Solid V: The Phantom Pain, Konami released what was essentially a “best of” album entitled Metal Gear Solid Vocal Tracks. Much of this material has actually been released on the previous 20th and 25th anniversary Metal Gear music collections, but new tracks included “Sins of the Father” and “Quiet’s Theme” from MGSV in addition to covers of older songs by regular Konami vocalist Donna Burke. Considering this album both on its own merits and in comparison to the already existing compilations, does it warrant a purchase?

The collection goes down each vocal track by game release order starting with MGS1’s ending theme, “The Best is Yet to Come.” Composed by Rika Muranaka who would return as a regular contributor to the series’ music, its haunting Gaelic vocals by Aoife Ni Fhearraigh and lush instrumentation swept players away back in 1998. Even now, well over 15 years later, its still holds up. The feeling ends up being lost in translation, however, with its English cover sung by Donna Burke later down the line. Though her performance is admirable, Fhearraigh’s is simply better singing the piece in its original language. On the other hand, MGS2’s “Can’t Say Good-bye to Yesterday,” also a Muranaka composition, is in the style of a lounge jazz piece sung by the late Carla White. The results are decidedly mixed as White offers enjoyable vocals, but lyrics which are clichéd. When transitioning into the bluesy improvised instrumental portions, the track manages to be more enjoyable somewhat. Burke’s cover hardly changes much considering that it’s still a lounge piece, but it manages to be a variation not without merits.

What will likely be the most lauded track by fans on this disc is MGS3’s hugely acclaimed opening song, “Snake Eater.” Composed in the vein of a 1960s Bond-like theme combining romantic strings, spy-like brass, and an incredible performance by Cynthia Harrell, “Snake Eater” earns every bit of its pedigree in being called one of the best video game music pieces of all time. The lyrics may occasionally evoke moments of cheesiness, but such complains hardly matter in the long run. It’s simply an unforgettable song that should be an essential part in any VGM listener’s library. Of course, one might wonder how Donna Burke would handle such an important piece. A hip-hop remix with added reverb and echoes, the cover proves to be a surprisingly good cover of what’s undoubtedly a technically difficult song. Burke accomplishes the daunting task of being on the same level as Harrell, which is something I have yet to see any other artist come close to when performing “Snake Eater.”

“Love Theme” is the opening song for MGS4, which is chronologically the last game in the series. Sung in Hebrew by Jackie Presti and with the lyrics written by series director Hideo Kojima himself, the track immediately establishes the melancholic atmosphere which is apparent throughout the game. Rustic violins create a Middle Eastern feel (MGS4’s first location), while Presti’s wailing lyrics are stirring and evocative. Some might find the song overly depressing and slow-moving, but I personally view it to be a masterful track wrought with effective pathos. I did not care very much for Burke’s cover, with its transition into tango and English lyrics completely changing (for the worse) the tone of the piece. 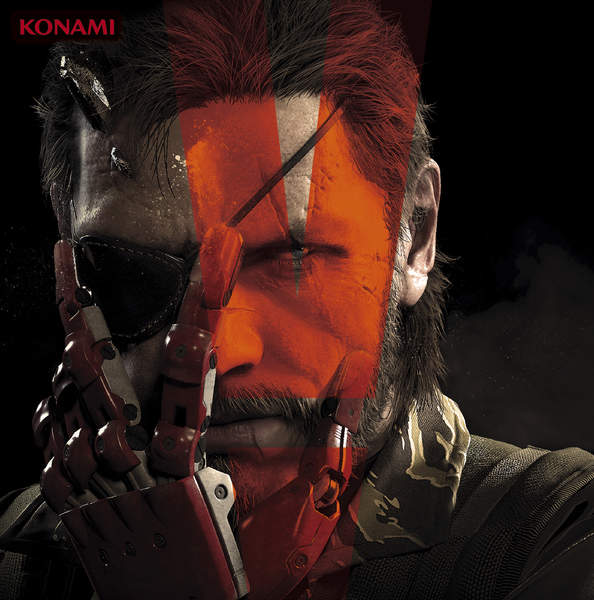 Of the series’ handheld entries, Portable Ops’ “Calling to the Night” and Peace Walker’s “Heavens Divide” are included. Despite originally being on PSP, the production values have not diminished in the slightest. “Calling to the Night” features excellent saxophone instrumentation working around Natasha Farrow’s delectable vocals, while “Heavens Divide” demonstrates Donna Burke’s excellent range with this being her first collaboration with the series. Both fall right in line with the series’ previously established musical legacy, but I have to lament the lack of Peace Walker’s other songs. Nana Mizuki’s “Love Deterrence”, as well as some other pieces which have been included on previous Japanese releases, are once again omitted here as they were on the 25th anniversary music collection. One can imagine that this was due to licensing restrictions, but their exclusion is a shame regardless.

Finally, the two songs from MGSV, “Sins of the Father” and “Quiet’s Theme” close off the vocal themes. The former is once again sung by Donna Burke and is very much akin to the style of “Heaven’s Divide.” Transitions between the various sections are spot-on, while the lyrics are fitting. “Quiet’s Theme,” sung by Stefanie Joosten, is absolutely beautiful. Although somewhat on the short side, the dynamic between Joosten’s voice and the solemn orchestra more than makes up for this. Burke’s version is generally strong as well, but the original is still superior. Like Peace Walker, however, there are more songs from MGSV which are missing such as “A Phantom Pain, “Nuclear,” and “The Man Who Sold the World.”

This point goes into why I ultimately think that there are better options available if one wants a “definitive” Metal Gear music experience. The previously mentioned 20th and 25th anniversary collections are simply more comprehensive in comparison. Offering the best of the series’ instrumental and vocal themes, plus the fact that both are still in print and at reasonable prices, they come at a much stronger recommendation. If one wishes for the music of MGSV, I’d advise skipping this album entirely and instead importing the Japanese release of the entire soundtrack which offers more songs.

Don’t get me wrong, the content on Metal Gear Solid Vocal Tracks is generally strong. If one purchases this album, they are getting a collection of some of the finest video game music out there. Much of it is territory already explored, however, and there is little new material here for seasoned fans of the series’ music. The covers are hit-or-miss for the most part, and the lack of certain tracks is an unfortunate oversight. In the end though, this is a generally enjoyable, if slightly redundant compilation which would not necessarily be a bad purchase. Just know that there are superior Metal Gear music options available if one wants a truly definitive auditory experience.