The name “Christopher Tin” is often synonymous with “Baba Yetu,” the iconic Civilization IV track that made game music history by being the first track from a video game to ever win a Grammy. However, Tin’s works not only span across a wide range of projects, but across a range of musical genres, as well. Offworld Trading Company is one such project, with a unique album setup and a particular array of instruments that give the score a very distinct identity.

In the opening track, “Red Planet Nocturne,” the melody introduced is played on an indistinguishable instrument, giving the entire soundtrack an unearthly feel. It sounds at once futuristic and retro, with a synth piano that has just enough depth to keep it from sounding too old and dusty. Eventually, the melody is removed from any semblance of acoustic instrumentation altogether, but the altered piano remains as an accompaniment until the piece fades away to a static silence.

It’s hard to pin down consistent themes in the album, but Tin does interesting work with ensuring the album’s cohesiveness.  The tracks in the album are bound together with elements other than melodic. For one, the album as a whole plays like a massive, unending symphony rather than a series of pieces. Quite literally, there is no pause between tracks – each one “ends” at some decrescendo and picks back up with the following track. “Sea of Sirens” is a slower, more thoughtful piece with metallic bell and piano sounds  playing pulsing, glassy strings of notes.

“Glass Furnace” and “Martian Glassworks, Inc.” are two of my favorite tracks, in terms of how one transitions to the other. “Glass Furnace” establishes a steady, pounding rhythm with a few two-chord clips – which have evolved into three-chord clips by the end – and “Martian Glassworks” takes the same beat and chords, adding much more complex counter-rhythm. “Offworld Price Index” then leaves off the heavy beat in favor of the more complex one, takes a quick breath, and follows up with a new set of chords. In this way, each track blends into the next without really pausing, but without ignoring the track change, either.

Two thematic elements bring the album together as well. The first is the structure of the pieces, which have a very repetitive, minimalist structure  – occasionally brushing by passacaglia and chaconne territory before changing time signature or overall structure.  “Martian Mining and Manufacturing” brings in a faster pattern of synth notes that beautifully illustrates the direction Tin takes the patterns in. A complex series of repeated notes repeats the same arpeggio over and over again, and just before the notes becomes unbearable, it suddenly switches to a bright new chord, and and continued arpeggios keep the piece moving along.

The second thematic element is a recurring minor chord that shows up periodically throughout the Offworld score. A resounding B minor opens “Assembly Line” which plays a slow, resolute melody over some oscillating notes and pairs of chord inversions. The chord sounds so strangely classical in context that it drastically sets itself apart from the sea of synth and arpeggios, however engaging, that make up the rest of the album. “Trickle-Down Economics” opens with a softer, more subdued chord, but after a slew of softer notes – chime sounds, harp sounds, piano keys – the chord stands out just as strongly as the one opening “Assembly Line” earlier on, despite the objective dynamic difference. Other tracks like “Sabotage,” “Trickle-Down Economics,” and “Brave New Planet” open with the distinctive bold chords that force the listener to take note of where they are in the score.

That’s not to say there are no melodic patterns Offworld Trading Company. “Welcome to Mars” incorporates an occasional three-note falling-down motif on the piano, leaving the melody unresolved for long stretches of time. As innocuous as the pattern may seem, it distinctively returns in tracks like “Offworld Price Index,” with some variation. The three-note pattern is still there, and the melody varies, but the descent from tonic to tonic still permeates the piece.

When the constant movement and agitation grows to be too much, the momentum slows – although it never stops. “Homeostasis” opens so slowly it’s almost still, but as soon as the piece seems to stop moving, the chord changes, or a very subdued rhythm begins. The rhythm continues through “MULE,” which even brings a melody into mix, until it closes off with one of those signature chords.  “Sunrise on Mars” serves as another musical break on the album, slowly doling out piano chords one at a time with a sorrowful melody softly piercing the upper octaves.

One of the most surprising  parts about the album is its classical influences, which I did not expect from the surface-level burst of electronics. The instruments  – piano, strings, raw brass – are all recognizable, if sometimes only barely, under layers of synth work and processing. However, it gives the album a level of freshness that wouldn’t exist otherwise, even if it takes the listener a second to pick up why. The other fantastic aspect of the album is the surprising classical allusions that seem to keep the album connected to Earth. The repeated chords resemble the opening of the second movement of Beethoven’s seventh (in a single chord, like “Sabotage”), or perhaps the fourth movement of Brahms’ fourth (in a progression like “Brave New Planet”). The piano in “Sunrise on Mars” has the repeated note across chords from Chopin’s Raindrop Prelude (as well as the underlying bass melodies). Snippets from Dvorak’s New World Symphony make their way into the album through brief melodic quotes, and it’s not hard to think that “Martian Glassworks, Inc” is a nod to Philip Glass’ iconic six-movement work. Even Shoenberg seems to pop in for a moment during the utter atonality of the melody in “Bribery.”

I was enchanted with the score upon first hearing “Red Planet Nocturne,” but quickly developed a deeper fascination with its structure after hearing more of the tracks. This is one of those scores that I want to listen to over and over again, because I keep feeling as though there are more elements of it to be discovered. Additionally, Offworld Trading Company is profoundly unique. The instrumentation is unusual, and the thoughtful mix of repetition, judicious use of melody and motifs, and self-aware balance of chord progressions and rhythms make Offworld Trading Company a score that I can’t quite pigeonhole into any one category. Fans of Christopher Tin’s work on the Civilization series may be surprised by this score, until realizing that the shift away from Tin’s more recognizable media (choir, authentic acoustic instruments) is entirely appropriate for the setting of Offworld. However, in no way has Tin lost his musical touch with games; Offworld Trading Company Original Soundtrack has a lot to offer. 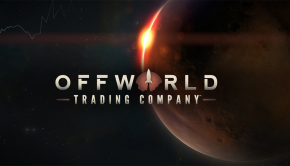