Megan McDuffee is no stranger to the world of synthwave and synthpop. Having worked on multiple original albums, singles, and covers in these genres, she lent her musical style to the world of River City Girls, headlining as the main composer.

In this interview with Megan McDuffee, she reflects on her recent soundtrack for River City Girls, talks about some of her original work this past year, and a few smaller projects as well.

VGMO: Megan McDuffee, thank you so much for taking the time out of your busy schedule to speak with our site today. Before diving into the music of your recent work, River City Girls, could you discuss your musical background and what drew you into the world of synthwave/synthpop?

My musical background is pretty varied I suppose. I spent years training classically in both piano and voice, and I did a lot of musical theater as well as jazz. More recently I’ve dabbled in drums and violin. Electronic music was (and is still) my favorite genre to listen to. I also grew up watching 80’s movies and falling in love with their soundtracks. My best friend in high school showed me Depeche Mode one day, and that further cemented my love for all things 80’s. So really it was a natural evolution to finding synthwave. I can attribute my first discovery of the genre to coming across Lazerhawk, Mitch Murder, and Tesla Boy when I was contracting for iTunes back in 2012. It married my love of the 80’s sound and electronic music, so I was hooked. 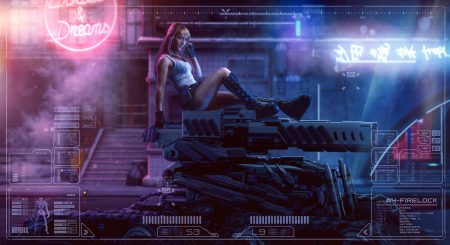 VGMO: Before discussing your biggest project of the year, could you reflect on the experiences for your work on Hostile Takeover and Plunge?

Megan McDuffee: Both of those games were a joy to work on. Hostile Takeover allowed me to explore one of my favorite styles/aesthetics: cyberpunk. I felt totally at home crafting gritty melodies and pulsing bass lines, all with a slight 80’s sensibility. It really was my cup of tea! Not to mention working with someone as nice as Tyler (the developer). That game will hopefully release later this year, and the OST even got a full write up and home page article on Bandcamp!

Plunge was the second project I worked on for a small developer team I actually met several years ago attending GDC (Game Developer’s Conference in San Francisco). This one let me stretch my composition muscles a bit, as it needed to be very quirky. Utilizing odd sound sources like a jaw harp and Tuvan monk chanting was great. I hope I can work with these guys again, as they are a kickass team and all-around great people.

VGMO: River City Girls is a classic beat-em-up, inspired, of course, by the River City Ransom series. Did you find it a daunting task to work on the cult classic series and how would you say, if at all, the musical history of the series inspired your approach to your take on the world of River City?

Megan McDuffee: It’s funny actually – I had heard of River City Ransom, but hadn’t played any of the games or even knew what a legacy the Kunio-Kun series had! I wasn’t familiar with the music whatsoever. WayForward wanted me to just do me, so that’s what I did.

VGMO: In the game, each of the stages has multiple themes to it, all of which are varied and flow very well with each other. Could you discuss any difficulties you had when coming up with such a massive amount of stage themes and making them all sound unique, yet familiar? Could you also discuss some of your favorite stage themes from the game.

Megan McDuffee: Once I figured out the general sound palette of the game, I tried to use the same few drum kits, bass synths, etc. for consistency. The variation then came from different melodies and chord progressions, and even tempos. Towards the end of the project I was running out of steam a little with the sheer amount of music I had delivered. The track “Azukay” in particular gave me some trouble. I’d write a few bars then not know where to go. With many breaks for walks and tea, I managed to find a zone and it turned into one of my favorite instrumental songs of the soundtrack. “Bully” was the opposite; I swear I was channeling something with that one, as it flowed out super easily, even having the melody and lyrics come to me simultaneously. Similarly, it’s one of my favorite tracks.

VGMO: While traversing the stages, occasionally the player will come across a boombox where the music changes from the instrumental themes of the stage to a synthpop vocal tune written and sung by yourself. It’s an interesting use of a stage prop to bring some dynamics to the soundtrack. How did this approach come to be?

Megan McDuffee: From the get go, I knew one of the bosses was a rockstar (“Noize”). WayForward and I briefly discussed the idea of essentially having the vocal songs be her songs. As development progressed, it just made more and more sense. I think when one of the game’s directors found out I was a vocalist, it gave him the idea to have me do vocal songs in the first place.

VGMO: Continuing with the vocal themes, they are all related to the various stages from what I gather. Are the lyrics themselves written in the perspective of the main characters? Could you reflect on some of your favorites?

Megan McDuffee: Yes, most of the songs are from the girls’ point of view (with the exception of “Unseen” and “Watch Your Back”, those being more from Noize’s perspective). But it was never my intent for them to be that on the nose. I wanted them to stand on their own, as well as just generally reference some of the game’s overarching themes.

VGMO: Although Chipzel wrote all of the boss themes, you wrote the boss theme for the character Noize. How did this character’s theme become more of a rock/synth tune as opposed to the chiptune dominated boss themes found on the rest of the album? Could you talk more about the different approaches for each of the phases presented on the soundtrack?

Megan McDuffee: Originally, Chipzel was going to tackle Noize’s theme with me doing the vocals. But it was eventually tasked to me since I was ahead of schedule with my deliverables. WayForward also thought it made sense since I was the songwriter/voice of Noize throughout the rest of the game. I knew that Noize would have a full rock band on stage, so I clearly had to write a song that fit the visual. The song needed a different approach than all the level tracks, as it needed precise tempo changes with the different fight stages. I basically had 3 exact tempos to work with, and wrote sections that would flow into one another but each time upping the intensity. 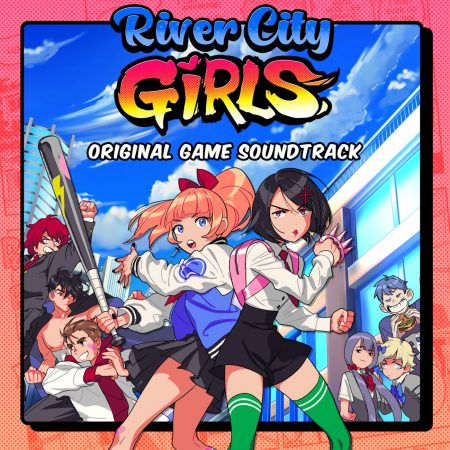 VGMO: In addition to the original music you wrote, there are also contributions from a multitude of other composers, Chipzel, Dale North, Christina Vee, and NateWantsToBattle. Were you responsible for the sound direction of their specific contributions, and if so, how did you decide the best approach for each artist?

Megan McDuffee: We actually had no crossover, and each created in a vacuum so to speak. I didn’t hear anyone’s contribution until I was assembling/ordering all the tracks to be sent off to the distribution company!

VGMO: In addition to the collaboration on River City Girls, you’ve also collaborated on original synthwave/synthpop albums Hero (with Alex Davidson) and Hearts on Fire (with Moonrunner83). Could you talk about the direction of these albums and your experiences with these talented artists?

Megan McDuffee: Both were amazing projects.

At the time, Hero was the largest collaboration I had ever done. Alex knew I loved video games, and he had the idea to make a fantasy and video game inspired synthpop album – something more whimsical than his past work. He had a list of inspirations for us to pull from, and would send me the instrumentals as he worked on them. I would then write the vocal melodies/harmonies and once we were both happy we’d work on lyrics together. Then of course I’d record them. The end result was a very uplifting and fun album. The label New Retro Wave produced a music video for the title track, and I got to drive down to LA for the video shoot. That was my first music video experience, and ever since then I’ve wanted to do more!

Moonrunner83 and I started our collaboration partnership with an EP called Streets (the title track of which is still our most popular song). Both it and Hearts on Fire were full of warmth and analog gear, and inspired by bands like The Midnight. It was a similar process, with Moonrunner83 sending me instrumentals as he worked on them, and me going in and doing the vocal parts and lyrics. The direction for both albums was one of love lost, longing, nostalgia, and summer nights drifting alone and dreaming.

We were fortunate enough to score a grant for a music video, so I flew up to Canada earlier this year for a truly epic music video shoot. If you haven’t seen the video for Streets, I recommend you look it up. It’s a full on cyberpunk short film and was a complete blast.

Those albums are just a couple in a long list of collaborations I’ve done. Just this year alone I co-wrote and sung for more than thirty other producers (with more in the works)!

VGMO: Once again, thank you again for taking the time out of your schedule to speak with us today. Is there anything you want to mention to those who are a fan of your music, either in the synthwave scene or the video game music community?

Megan McDuffee: Of course! Thanks for having me.

Moonrunner83 and I are working on a new EP of moody and cyberpunk-inspired synthpop. And last but not least, I’ve been producing an EP of cover songs with a very sexy theme (one of which is even “Toxic Love” as performed by Tim Curry in Ferngully). I’m very excited to share these. The Moonrunner83 collaboration will come out early next year, and the cover album is set to release December 13th!