Saori Kobayashi has received widespread acclaim for her work on Crimson Dragon and the Panzer Dragoon series. In 2010, she teamed up with Suikoden II‘s singer Yumiko Takahashi to create the AKANE. Having previously worked together on Panzer Dragoon Orta, the duo released their first album as AKANE titled Kochae. Since then, they have also worked together on original albums including Journey, In Flux, and Kobayashi’s most recent album Terra Magica.

For this interview, I sat down with first Saori Kobayashi, and Yumiko Takahashi, who joined us after a few minutes, at MAGfest to discuss their albums and their concert at MAGfest, for which they joined up with several other prominent performers. I also spoke with Brave Wave CEO and translator Alexander Aniel about some of AKANE’s current and upcoming work.

Emily: Thank you for meeting with me here. The first thing I wanted to ask about was a great little soundtrack that came out last year called Kakuriyo no Mon. It’s got a great setlist of composers — can you tell me a bit about that?

Saori Kobayashi: There’s a friend of mine in the gaming industry who’s also a Panzer Dragoon fan, and that person happened to be doing the planning for Kakuriyo no Mon. The company that published the game does make composition requests to various composers so for this particular project, that person wanted to have multiple composers on board, so I was one of the people that that person ended up asking, but the company that made that game is probably not very well-known.

Emily: Were you asked to do a specific type of piece?

Saori Kobayashi: They asked me to make a song, and I had a fairly free hand when I created it. I didn’t know what specific part of the game world it was going to be, but I did know that it was going to be used in some kind of boss battle or an action-y combat sequence. I just wanted to know what the game’s world was like, so I had them tell me that before-hand.

Emily: I would like to ask about your latest album, Terra Magica, which you’ve called “a love letter to your fans.” Can you tell me about the origin of that album? 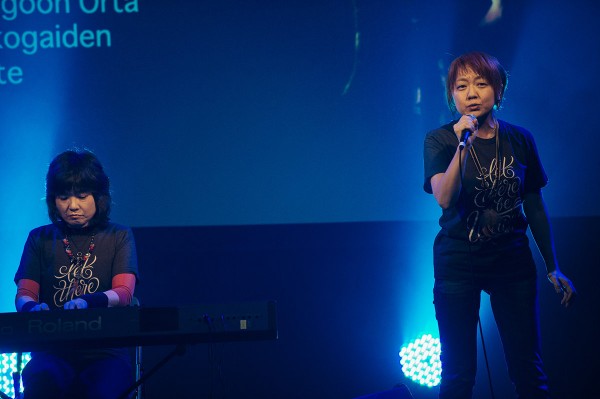 Saori Kobayashi: First, I’m very well aware that most of my fans are Panzer Dragoon music fans so I definitely wanted to keep elements of that in place for this album. In terms of the packaging on the CD, as we all know, Panzer Dragoon is a game series that takes place in the sky, and that’s been a very prominent theme of those games, but for something like Terra Magica, I wanted to focus on the ground a bit more. I wanted to show that part of the Panzer Dragoon world that has not been as prominently featured, if that makes sense. There are two motifs.

Yumiko Takahashi: I did work on two songs. Terra Magica is my solo album. I followed Kobayashi-san’s direction very closely. I am a vocalist for AKANE, but I also do chorus vocals where I don’t have any personal input on how the song is sung, so Kobayashi-san put out the direction very clearly, and my vocals in the Terra Magica songs are definitely part of the background. They don’t direct the song; it’s more like the song directs the flow of the music. Terra Magica is made to sound like a game soundtrack.

Emily: Was this the first album you’ve had, not a soundtrack, that doesn’t feature any music from a previous series that you worked on? I remember listening to Journey and your first AKANE album, Kochae, which had excerpts from Panzer Dragoon and Crimson Dragon. I don’t think I saw any tracks on Terra Magica that were directly from another game.

Yumiko Takahashi: Kochae doesn’t technically have anything from any game officially; that said, some of the music from that album was made when they were experimenting with music for the Panzer Dragoon games, but nothing official, like the Crimson Dragon theme, for example.

Saori Kobayashi: There is no game music, but it’s supposed to sound like it came from a game. It’s an album that’s made specifically for people who like to listen to that, my old music.

Emily: What kind of music should we be expecting at the concert today?

Alexander Aniel: It’s kind of a lie to say it’s a Panzer Dragoon concert. Or it’s not entirely true. We were wondering what to call this performance, and at first were thinking, “Let’s call it Panzer Dragoon” but then we thought, “Wait, but there’s Crimson Dragon too, and there’s Terra Magica.” So we were wondering whether we should call it “Panzer Dragoon and Crimson Dragon and Terra Magica Orchestra Concert” but that’s obviously a little too complicated. We’re kind of winging it and we hope no one really notices.

Saori Kobayashi: So there are two Crimson Dragon songs, and I definitely participated in making those. I’m sure you’ve read this before, but the versions of the Crimson Dragon themes that I wrote never made it to the final game. You remember that it was originally an Xbox 360 game and then it got moved over to Xbox One, so along with the Xbox One version they ended up redoing the soundtrack with different arrangements from a different person. It’s still my music but the arrangement was done by an orchestra, and the more Hollywood-based composer.

Emily: Are those the songs that ended up on Journey?

Saori Kobayashi: No, Journey would be the way I would have done it. But anyway, I did Crimson Dragon, so that’s why I’m at this concert today. I haven’t done as much work on Panzer Dragoon, which kind of confuses me because we’ve been working on that so much.

Emily: You also brought in a couple of other performers. How did you decide which other instruments you needed, and how did you find those people?

Saori Kobayashi: I don’t know how the other people ended up participating.

Alexander Aniel: I do! That was the part that I negotiated with MAGFest and my partner in Japan, Sterling Diesel — we’re both part of Team Japan at MAGFest. At Japan Expo last year, she performed with JAGMO, the Japan Game Music Orchestra, and they had a fairly successful performance, so I kind of used that as a model to recommend to Western MAGfest. If Saori Kobayashi came to MAGFest she could also perform with a quartet plus a percussionist and a flutist, so we’re pretty much going on that model.

Emily: So who came up with the instruments that you would need?

Alexander Aniel: I believe it was Sterling who came up with a few different ideas. I talked to her, and I said, “What kind of instruments should we have?” So I think her personal request was the flutist and the percussionist.

Saori Kobayashi: I want to mention the influence of the Japan performance. It was JAGMO that came up with that particular layout. We modeled it on that one because there were scores that we could reuse, so that’s how we ended up with this particular combination of performers.

Emily: You’ve worked more towards original music rather than soundtracks recently — it seems like you are pushing to experiment more with your composition. how do you think your musical sounds have evolved in the process?

Saori Kobayashi: Panzer Dragoon and Crimson Dragon have well-defined game worlds and you have to stay within those game worlds, but recently, there hasn’t been as much game soundtrack work. There has been, but not quite as much. Even as a musician, I’m trying to figure out how to take what I’ve been able to do and maybe apply it to different genres of music. That’s an ongoing goal of mine. In terms of something to specifically challenge in the future, Terra Magica was actually a fairly — not simple, but relaxed album to make. It wasn’t particularly intensive, but if in the future I could make an album that I could do completely on my own I would like to do something more challenging, maybe more energetic, something more uplifting, perhaps.

Yumiko Takahashi: Depending on the type of project I’m working on, I do have to change my approach somewhat. In terms of me as a musician personally, yeah, I’ve been singing the Japanese folklore genre for quite a long time, and I would perhaps like to maybe go beyond that at some point and try something new. I’ve also studied acting, and maybe I’d like to see where that could influence my future music direction. I’m not thinking specifically in terms of challenging a new genre, per se, but in the future it would be nice to have more opportunities to develop my sound and see where else I can take it.

Emily: Do either of you have a favorite album that you’ve done or participated in so far?

Saori Kobayashi: Panzer Dragoon Saga. That’s the one I love the most.

Yumiko Takahashi: Suikoden II. I was a planner and a game designer at Konami at the time so it was kind of surprising but very interesting to be asked to provide chorus vocals for a game of that caliber, of that type of design. Maybe Konami did it because they were trying to save money by not hiring an external voice actress but even then, it was a good experience.

Emily: What projects do you have planned for the future?

Alexander Aniel: Oh, there’s definitely stuff for her in the future. Big anniversary coming up!

Saori Kobayashi: I personally do not seek out projects anymore, I wait for them to come to me, either through Brave Wave or otherwise. I’m not playing the role of a salesman. I’m also a music instructor day-to-day. So that’s what’s in the future.

One Response to Saori Kobayashi and Yumiko Takahashi Interview: AKANE and MAGfest