The Game Audio Network Guild has confirmed its winners for the 16th annual G.A.N.G. Awards today via Twitter.  The ceremony was held on March 22 during the Game Developers Conference in San Francisco.  Among the titles honored for music-related categories were Call of Duty: WWII, Horizon Zero Dawn, So Let Us Melt, Hearthstone, and Persona 5. 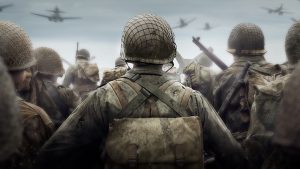 Call of Duty: WWII, composed by Wilbert Roget II, received awards for Best Interactive Score, Best Original Soundtrack Album and Music the Year – alongside an award for Best Game Audio Article, Publication or Broadcast for Roget’s interview with Gamasutra on “Musical Scoring with SFX in Mind for ‘Call of Duty: WWII.’”

Awards for Best Music for an Indie Game and Best Music for a Casual/Social Game went to So Let Us Melt, composed by Jessica Curry of Dear Esther and Everybody’s Gone to Rapture fame.  Hearthstone took home an award for Best Original Song in recognition of “Hearthstone is Home.”  Finally, Persona 5 – scored by Shoji Meguro, and our personal pick for Album of the Year – was honored with the MAGFEST/People’s Choice Award.

This marks the first major award from the industry that CoD: WWII has received for its musical score.  The game is also nominated for an Audio Achievement award at the upcoming British Academy Game Awards – more on that can be found here.

More information on other game audio accolades received at the 2018 G.A.N.G. Awards can be found in the organization’s press release.