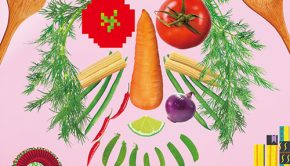 Hirokazu Tanaka, better known as his stage name Chip Tanaka, has announced he will be releasing his first, full length,