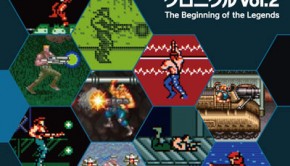 EGG Music Records announced today that they are publishing Contra Chronicle Vol. 2 -The Beginning of Legends-. The three-disc, 157-track