Video game music publisher, Brave Wave, have announced a brand new arrangement album for the Panzer Dragoon series. Franchise composer Saori Kobayashi will be providing arrangements of both her and fellow composer Mariko Nanba’s compositions from the beloved series. 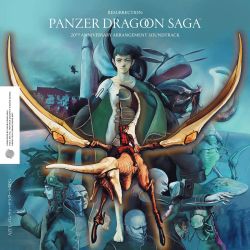 The 20 track album will release on January 29th and is available in digital, CD and vinyl formats from Brave Wave’s official bandcamp page, with four tracks available for download immediately.