The ZX Spectrum was one of the defining home computers of the 1980s in the United Kingdom, paving the way for a burgeoning market that attracted millions of consumers. Boasting some sophisticated graphical and audio hardware for the time, the Spectrum even now has a strong homebrew following with over 24,000 titles in its expansive library among various models. Unfortunately, its popularity was mostly limited to a European market and never really took hold in America which was dominated by the likes of the NES and Commodore 64.

Celebrating the everlasting legacy of the Spectrum, the excellent indie chiptune label Ubiktune released an album entitled The Blossoming Years, which pays homage to the system’s original sound. This compilation of early work originally composed in 1999-2001 comes from veteran Russian composer MmcM, a fan favorite artist in his homeland. A master of chiptune and someone who is intimately familiar with the Spectrum’s audio capabilities, his work does not disappoint.

As if a ZX Spectrum was booted up, “Intro” consists of start-up sounds and keyboard clicks, before transitioning into a light airy synth melody. The sound cuts out as more clicks are heard, introducing a more frenetic blippy theme, as if something heard from a psychedelic platformer. Though short and more experimental than not, it appropriately sets the tone of what can be expected. From the beginning, MmcM establishes a soundscape that sounds exactly like what one would hear if they were experiencing a Spectrum for the first time.

“Assured” starts off the album proper with an upbeat melody that’s very reminiscent of a first-stage theme. Having multiple layers of varied composition, each section is thoroughly developed with great craftsmanship. The primary theme on higher-octave synth lines mixed in with secondary and tertiary themes on low-octave samples makes for some memorable listening. Having very little experience with the Spectrum myself, I was truly surprised that the machine could output such high quality sound.

“Jungle Bit Popsacid” beings strangely with some punctuated blips, then picks up with a second channel of sound. The melody slides back and forth between two different themes throughout its two minute runtime. “Melancholy,” and the even more impressive “Bits Of Fantasy,” offer similar patterns, slowly developing with added lines of composition as it progresses through. Despite some tracks only having durations of around two minutes, MmcM squeezes every ounce of creativity he can gather. “Laxity” and “Seeing,” for example, maintain a consistent tempo and melodic structure, but are made interesting with smart mixing choices and decorative samplings. “Mad Men” could have easily served as a boss battle theme with its dire sound and darker modulations. “Al-ya Trance” is akin with its fast-paced style, but exhibits a strong touch of techno. “Bugs In My Mind” begins with bare minimalism, only to shift into a fuller melody at around the 30 second mark while the ambience continues to provide harmony. 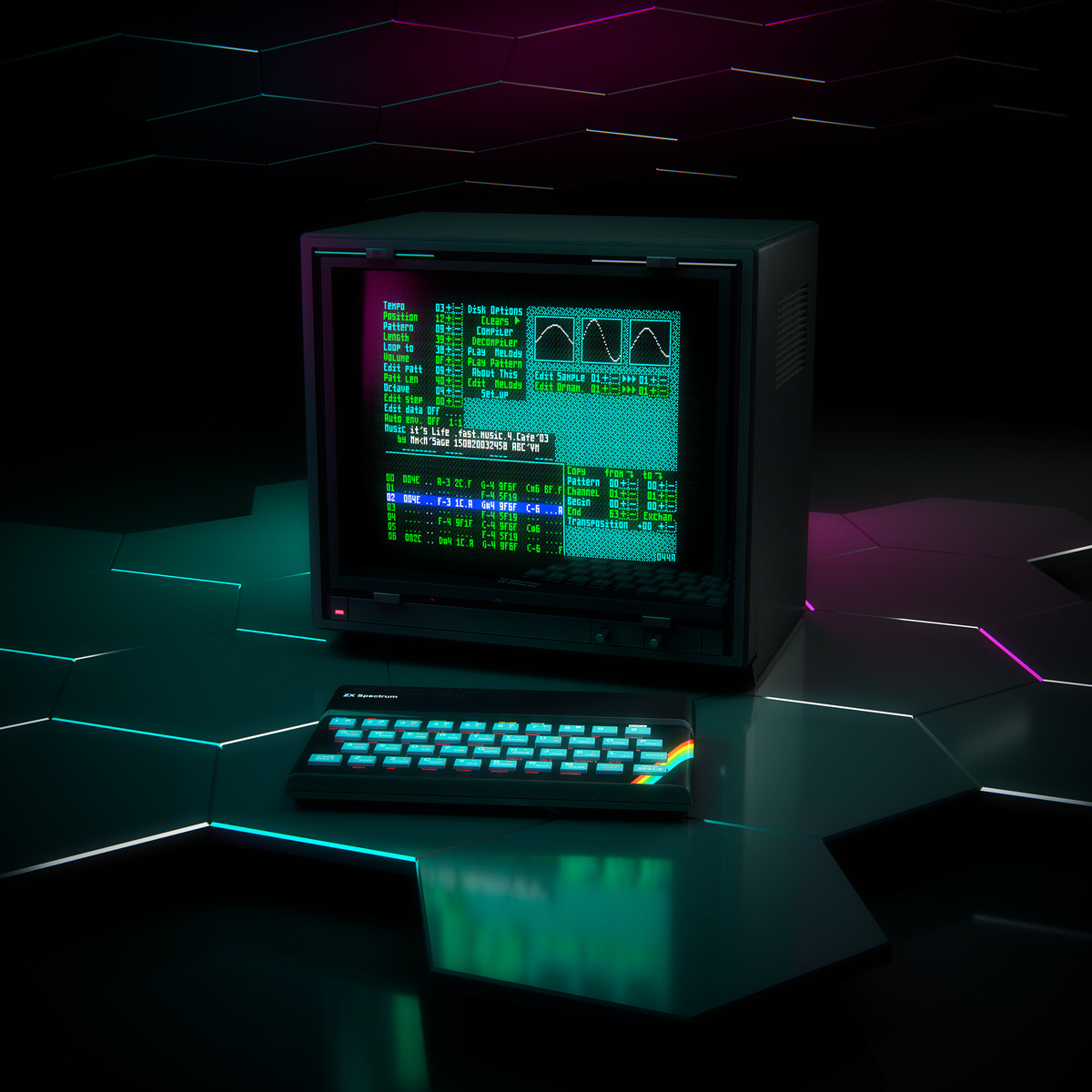 The most impressive tracks are the ones in which MmcM devotes longer runtimes to, which allow every extent of his ZX Spectrum sound prowess to shine through. “Cybernation” and “Hopeful” both proceed in a format that starts minimally, but soon become fuller with a consistent layer of synth subtly added on, becoming an eclectic mix of chiptune fever towards the end. “Dance With Death” and “Offense” utilize electronic blips (which almost sound similar to Mario’s fireball sound effect) in addition to other higher pitched sounds to create a track that reminds me of a shooting level. Though modeled after the Spectrum, the overall feel is very arcadey. “Nostalgia In My Soul” adds a touch of melancholy to its mystifying musical structure, and proves to be a highlight with its appropriately named nostalgic melody.

As if reaching the end of a game which never existed, “Rescue Me” and “Suggestive” close off the main score. The former begins downtrodden, but quickly picks up melodically and rhythmically, akin to a player reaching the final stage. The latter, on the other hand, is very much like a staff roll theme with its summarization of the overall soundtrack in tonal medley-like form. What follows are four remixes of tracks from the album. Far from being simple filler, MmcM re-arranges his own work with the assistance of fellow Russian arts Mic and nq. The synth is given a substantial upgrade, along with every other aspect. The remaster for “Suggestive” is my personal favorite, but the other three tracks pull in some surprises I did not expect. The final track is “Outro,” which pays homage to the first track consisting of similar hardware sounds. It’s more of thematic closure than anything, however, and I found the remixes to be far more satisfying.

Having gone into The Blossoming Years with no indication of what to expect, I walked away very satisfied with it. Proving that there still is life within the sound chips of a decades old computer machine, MmcM treats hardcore fans of the ZX Spectrum with an original album that’s fresh, innovative, and all-around a treat to listen to. It won’t convert over people who aren’t fans of chiptune, but to anyone that’s a fan of retro electronica, it comes with a good recommendation. The melodies are varied and the sound, while intentionally dated, allows MmcM to work within the limitations to truly create something special. A great tribute to the Spectrum legacy and at only $5 with free streaming on Bandcamp, The Blossoming Years is another hit from Ubiktune.

One Response to The Blossoming Years