After purchasing my ticket online, my father and I jumped in the car and headed across the Benjamin Franklin bridge to Philadelphia. The Merriam Theater is about a half-hour from my home, but my father was going to a separate event that evening, so he was happy to come along, i.e. drive, and take photographs.

The exterior of the theater was quite jammed. People of all walks were lining up, and I was surprised at the variety. Women equaled men, the old mixed with the young, and the costumed mingled with the formally-dressed. After being admitted and purchasing a (mildly overpriced) program, I noted the store to the right: CD’s, posters, shirts! Wow, thought I, looking down somewhat regretfully at my money-stealing booklet. Oh well.

The theater was lovely, full of classic arcitecture and a seemingly Baroque aesthetic of art. The laser-lighting, amplifiers, and enormous television screen were a perplexing contrast, a sort of ‘Techno Rave at the Carnegie Hall’ vibe. I found my seat in the left-middle section of the ground floor and waited for the show to begin, while enjoying the cosplay contest crowd-warmer. An amazingly-accurate portrayal of Rude from FFVII won, and we cheered with vigor! Ho ho! 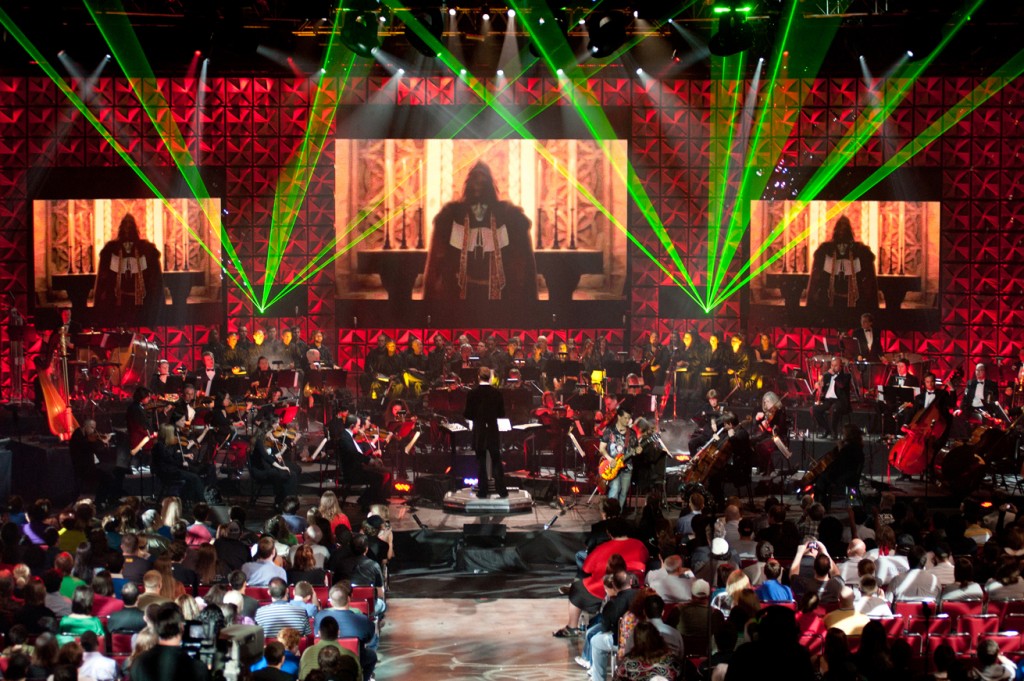 The music followed, and the rest of the evening went off free of hitches, from what I could tell. I loved the montage of classic game footage and wished I had played more of the titles in my youth. Tommy Tallarico came out next, and, here and throughout the evening, he was an energetic, engaging host.

The Metal Gear Solid segment began, and, though I was only familiar with the music from the first installment, Gregson-Williams’ score easily rivaled the images on screen in terms of intensity. Amusingly, during one scene, a costumed soldier stalked in front of the orchesta with an electrified exclamation point attached to his back. On another note of interest, there was absolutely no severe blood or violence shown in the visual display from typically gory franchises like Metal Gear or God of War, and the latter installment’s hyped nudity was blurred in every instance.

The rest of the music was finely-performed, though I’ll only touch upon it briefly: Castlevania’s sequence was decent, but I’ve never been taken with the series; I suppose I’m not very sympathetic to or delighted by its style of organ rock. God of War’s and World of Warcraft’s segments were both intense, cinematic, and choral, being highlights of the evening. Advent Rising’s score was somewhat similar, but with a more operatic flair, both with its sopranist and take on melody. The part-writing in Beyond Good and Evil was exceptional: ‘Suspension with a deceptive sixth!’, I kept thinking gleefully. Myst was also quite beautiful; the choice to have a child soloist as the secondary voice of the theme was inspired, and the medley was some of the best composition I’ve heard from the man conducting it, Jack Wall.

My only complaint with the sheer force of many of these pieces was that the occasional lack of contrast proved a bit exhausting; much of the concert focused on action or climactic, choir-driven trailer material, and, even with lighter interludes from Mario and Sonic, it left me yearning for a simple Andante or Siciliano to balance the weight. A minor concern, however, in an overall positive experience.

The program concluded with the adventurous The Legend of Zelda, Everquest II, a very well-crafted Medal of Honor, Kingdom Hearts, and, finally Halo. The last one struck me as especially creative, as, though its roots were firmly in action film soundtracks, its use of a Gregorianesque chorus lent the finale a haunting, ethereal quality. The Videogame Pianist, Martin Leung, also performed a fitting suite of Final Fantasy, although, like others, I was disappointed to hear nothing orchestrated. To the doubters, as well, though he’s probably practiced the Super Mario World theme a thousand times, he can still play it damnably fast. In addition, the guitarist from ‘Guitar Hero’ provided a short riff, there was an oddly fascinating rendition of Tron, and a live competition featuring members of the audience in both Space Invaders and Frogger. Phew.

I was able to have my throat-gougingly expensive booklet signed by every artist in attendance, which justified its wound to my wallet. Invariably, I ended up insulting or irritating just about everyone there, however. I couldn’t help it! In a calm setting, I would have loved to discuss each cue, its composition, recall each person’s past television appearances, and praise the games in a clear, eloquent manner, but, when one has a room full of noise behind him and is in a quickly-moving line, it’s difficult to do anything but smile dumbly and ask for an autograph. To tally, I had never heard the guitarist’s work, didn’t know what OCRemix was, mislabeled Halo’s categorical style, creeped out both Gerard Marino and Jason Hayes with awkward silence, and could conjure nothing substantial for either Tommy Tallarico or Jack Wall on their tour or individual contributions. I mistook no genders, thankfully, which was a slight saving grace, and I have the signatures all the same.

The concert was a great time. It wasn’t my usual milieu or crowd, and the music wasn’t necessarily work to which I’d always turn, but it was a thoroughly entertaining adventure full of passion, creativity, and a genuine love and respect for the video game world. I’d recommend the trip to anyone with an interest in the subject matter, although it should be noted I’m not generally one to spend hundreds of dollars on a cross-country journey.