Sega’s Sakura Taisen series, set in an alternate reality 1920s setting, combines mecha-based strategy RPG battles with social interactions in the style of a date sim or graphic novel. 2002’s Sakura Taisen 4: Maidens, Fall in Love, was the series’s second incarnation on the Dreamcast. The women of the various assault teams take front and center stage in each game more than the male protagonists, both in combat and in song, and each game features many songs. And as the game combines the teams from the previous titles, the Paris team from the third game and the Imperial team from the first two, the number of female protagonists is doubled. Kohei Tanaka, who had scored all of the previous games in the series (and has scored the ones that have been released since) again wrote both the songs and the background music. As always, the lyrics to the songs were written by Ohji Hiroi.

The soundtrack begins with the rousing series theme, “Declaration! Imperial Floral Assault Group,” this time with a “Finale” subtitle. The theme is in the style of Japanese minor-key heroic themes, and the orchestration is gleefully over-the-top and unrestrained, with brass fanfares, electric guitar-backed riffs, drum backbeat, soaring strings, and of course, a chorus consisting of the entire cast. The lyrics are appropriately tied to the mecha themes of the 70s and 80s, an anthem to the heroism of the group. On paper, it sounds like it might be overbearing, but aware of its own excess and reveling in it, the song ends up being more endearing than irritating.

The background music itself has a few traditionally themed tracks as well. “Kagura Dancer” opens with hichiriki, sho, and shoko. A short roll on taiko leads into its main section, repeating the opening melody, but this time backed by steady koto plucking and string chords. “Graceful Tempest” also uses traditional instruments, this time focusing on biwa, but the overall effect is much more western in feel, despite a return of the earlier hichiriki theme.

The rest of the music is primarily orchestral. “Flowers Flutter about the Capital” opens with a fanfare-like series of parallel fifths, and its main march melody is a rather standard horn motif answered on strings, but the details of its orchestration and countermelodies are much more interesting, give the track its propulsive energy. “Here is Happiness” has a pseudo-classical feel, while “Mikasa, Stolen” is an orchestral march with some synth backing like something out of Front Mission.

The ending song, “You, Flower,” is based on a pentatonic scale theme (with some inflections) that sounds like a Japanese folk song. The theme is nice, and it gets a few instrumental arrangements as well, the best of which is “Maidens, Fall in Love,” with its gently swaying piano chords. The song itself starts off well enough, but at nearly nine minutes without much development of the limited material, it feels overextended and repetitive, and as it continues, the arrangement becomes increasingly cloying. The sugary-sweet lyrics don’t help matters, either.

The soundtrack only really goes up to track 13. After that are extra versions of the songs, including a full karaoke version of “You, Flower” that takes up another nine minutes of the disc’s running time. So in actuality the soundtrack is rather short, only barely reaching album length. On top of that, the sound quality of the CD, especially in the tracks featuring orchestra, is quite poor.

Sega may have pulled out of the console market after the relative failure of the Dreamcast, but the game franchises they have created are still continuing. Even though there has not been a main series Sakura Taisen game in five years now, the series still has name recognition in Japan, and may be revived in the future. Sakura Taisen 4: Maidens, Fall in Love‘s soundtrack has a number of good tracks, but some poor ones as well. It is overly short, and the padding at the end only makes the disc feel less substantial. Fortunately, the better parts are quite good and make the soundtrack worth a listen for fans of the franchise. 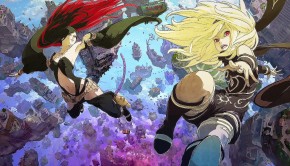