The Neo XYX Original Soundtrack is the latest soundtrack composed by Rafael Dyll for the retro vertical scrolling shooter released recently on Dreamcast and NEO GEO. It was composed with the intent to sound like classic 80s and 90s arcade soundtracks and and even takes into consideration memory limits of the NEO GEO when composing the music. Compared to some of his larger scale works such as Rainbow Moon or the Söldner-X series, how does this soundtrack turn out?

Compared to his other shmup soundtracks, Neo XYX definitely is a more bare-bones affair in terms of music, featuring a short title screen composition, the stage and boss themes, and an ending theme. The meat of the soundtrack, of course, is the stage themes. “Armed and Clawed,” the stage one theme, definitely kicks things off with a bang. It features a wonderful synth melody, lots of intense percussion, some guitar riffs, and brass sounds to give it that feeling of taking the fight to the enemy. On the flip side, the second stage theme, “Counterattack,” definitely gives off a more mysterious sound in terms of atmosphere and the melody itself gives off an almost aquatic vibe and the rhythm track is quite catchy as well. Speaking of aquatic, the third stage theme, “Watership Down,” definitely continues with the aquatic feeling, particularly in the introduction of the composition. There is some really neat percussion effects featured in the second portion of the tune that really helps provide a memorable listening experience. In terms of melody, it’s a pretty decent melody, however, I find the B section of the melody to be more engaging than the A section. “In the Machine,” the fourth stage theme, definitely gives off a colder vibe. It definitely features a more industrial sound, both in terms of percussion used, and synth tones incorporated in the melody. There is also a nice little bit of rhythm guitar featured that gives it a bit more of an organic touch.

The fifth stage theme, “Tigers vs. Steel Dragons,” definitely brings the energetic stage themes back to the forefront. There is plenty of slap bass and intense drum work in the accompaniment that goes well with the heroic and adventurous sounds featured in the melody line. The final stage theme, “Lion’s Den,” brings us back to the more atmospheric side of things, featuring an ominous soundscape coupled with some sinister synthesizer tones. There is definitely a feeling of desperation and finality in this tune and while it may be as energetic as some of the tunes, it manages to entrance the listener with its masterful blend of components. The sole boss theme, “Climax,” is definitely one of the best tunes on the soundtrack. It features an ominous tone, an upbeat tempo, punchy percussion, and a sinister melody with plenty of synth tones to help accentuate this feeling. In some ways, I wish there was also a final boss battle theme like many of the retro shmups out there. However, the boss theme is quite good. “Glorious,” the ending theme, has a very robotic and futuristic soundscape with a definitely sense of accomplishment despite its short length. It’s a nice way to close off the album.

In the end, I think that the Neo XYX Original Soundtrack captures the spirit of retro shooters quite nicely. Even older arcade games featured a blend of more action oriented and more atmospheric pieces, compared to some of the more action oriented only stage themes of more modern shooters. However, at the same time, I think some of the pieces, while quite nice to listen to, lack some of the punch that Rafael Dyll’s other compositions are known for, but this could be due to the limitations placed on the soundtrack in terms of keeping within memory specifications of the NEO-GEO. Fans of Rafael Dyll’s work will certainly find something to enjoy during his foray into retro inspired sounds; however, it may not be a must-have either. 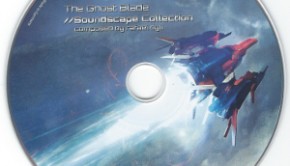 Rafael Dyll Interview: Leaving Behind a Decade of Game Scoring →