The Ghost Blade Soundscape Collection features the music for the Dreamcast shmup, The Ghost Blade. Composed by Rafael Dyll, known for his sci-fi soundtracks to the Söldner-X series and other retro inspired titles like Gunlord, it features a blend of electronic styles fitting for a shmup and definitely shares some inspiration from those soundtracks composed by Manabu Namiki for Cave. How does the soundtrack turn out?

The album opens with “Press Start,” which is quite reminiscent of his work in the Söldner-X series, and features a fantastic melody, ethereal vibes, and a bit of funk. Moving to the first stage theme, “VR Ghost Installed,” it also features a very catchy and upbeat melody. Stylistically, it definitely adheres to a Namiki style Cave shooter, with some ESPGaluda 2 and some DoDonPachi vibes throughout its synth and rock based approach. The second stage, “Seasons in Mars,” also features some DoDonPachi vibes with its dancy beats. What’s particularly nice about this track is that it starts off quite ethereal and transforms into a more trance inspired tune with heavier beats as it progresses. The third stage theme, “Thwarted Democracy,” is very Söldner-X in sound. It has a really fun accompanying rhythm with some industrial tones and some funk vibes and is one of the less melodically focused tunes on the soundtrack. “Orgasmic Stride,” the fourth stage theme, is a high energy piece with some vocal samplings and ethereal tones, although some of the melodic phrases heard in the tune are definitely reminiscent of the DoDonPachi main theme.

“Reality Break Down” is definitely k.h.d.n inspired in style thanks to its abstract and heavy beat pattern in combination with its industrial flair. Compared to the rest of the soundtrack, it is certainly the most unique tune on the album and is certainly my highlight. The boss theme, “Ghost Terror,” is an energetic one with soft piano chords, a tension in the air thanks to its atmospheric background accompaniment and rock elements, although I wouldn’t consider it anything special despite its enjoyability. “Soul Mate Lost” is a soft ambient electronic theme that is quite beautiful while the ending theme, “Farewell,” is quite beautiful, and aptly titled, given Rafael Dyll’s seeming exit from the industry, and features ethereal synth and a lovely piano coupled alongside a great melody. There are also two renditions of the first stage theme done in a funk and pop rock style, but I don’t find them particularly enthralling and think the source material is much better.

All in all, the soundtrack to The Ghost Blade certainly isn’t Rafael Dyll’s strongest work, but it is one that is still enjoyable on the whole. At the moment, a second hand shop may be the only place to get the soundtrack if all the pack-in versions of the game have sold out. Perhaps it will appear digitally in the future, but that is uncertain at this point. If you do manage to find a copy, it might be worth the purchase if you are a die hard Dyll fan, but I wouldn’t call it absolutely vital listening either.

Rafael Dyll Interview: Leaving Behind a Decade of Game Scoring → 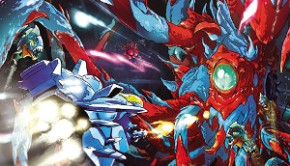