The best-reviewed PlayStation 4 launch exclusive was neither Killzone  nor Knack, but rather Resogun, a frantic space shooter from Finnish developer Housemarque. The soundtrack marks the latest work of Ari Pulkinnen, who has worked with Housemarque in the past on their other Playstation Network games, Super Stardust HD, Super Stardust Delta, and Dead Nation, as well as composed for the fantasy series Trine. Once again, he delved into the electronic soundscape to provide an energetic and fitting score. The soundtrack is at last available through Sony Computer Entertainment via the RESOGUN Season Pass. Does it live up to the high expectations?

The soundtrack opens up with “Resogun Main Theme,” a hybrid orchestral/electronic composition that really manages to give off a very epic sound. The powerful brass combined with the accompanying strings work and pounding electronic beats gives it a very futuristic martial atmosphere as if one is preparing for battle.Like “Starfighting Across the Universe” did for Super Stardust HD, “Acis” sets the tone for the stage themes in Resogun. It features a bright, memorable melody accompanied by an intense industrial beat, some crunchy wobbles, and a great space vibe. It is definitely one of the highlights on the soundtrack. “Ceres” is the shortest stage theme, but despite its length, it manages to feature a very strong, energetic melody, plenty of neat synth effects, and an exhilarating beat. “Decima” is another fantastic stage theme that really manages to combine a great spacey atmosphere with some amazing melodic sections and focus on some light wobble effects in the accompaniment. The fourth stage theme, “Febris,” really manages to impress as well. There is a very epic nature to this piece, especially in the intro with the orchestral and industrial fusion before moving into an energetic frenzy. However, what truly makes this piece shine is the change in tempo and even atmosphere. At times, the tempo is slowed and the orchestral elements are introduced once more to give off a grander soundscape. Lastly, “Mefitis” is an intense drum n’ bass piece with plenty of wobbles, an epic melody line, and plenty of frenetic synthesizer accompaniment that helps portray a very hectic and chaotic environment. Some of my favorite aspects of the piece are the ways that Ari Pulkkinen manipulates the synthesizer to create the aforementioned atmosphere. 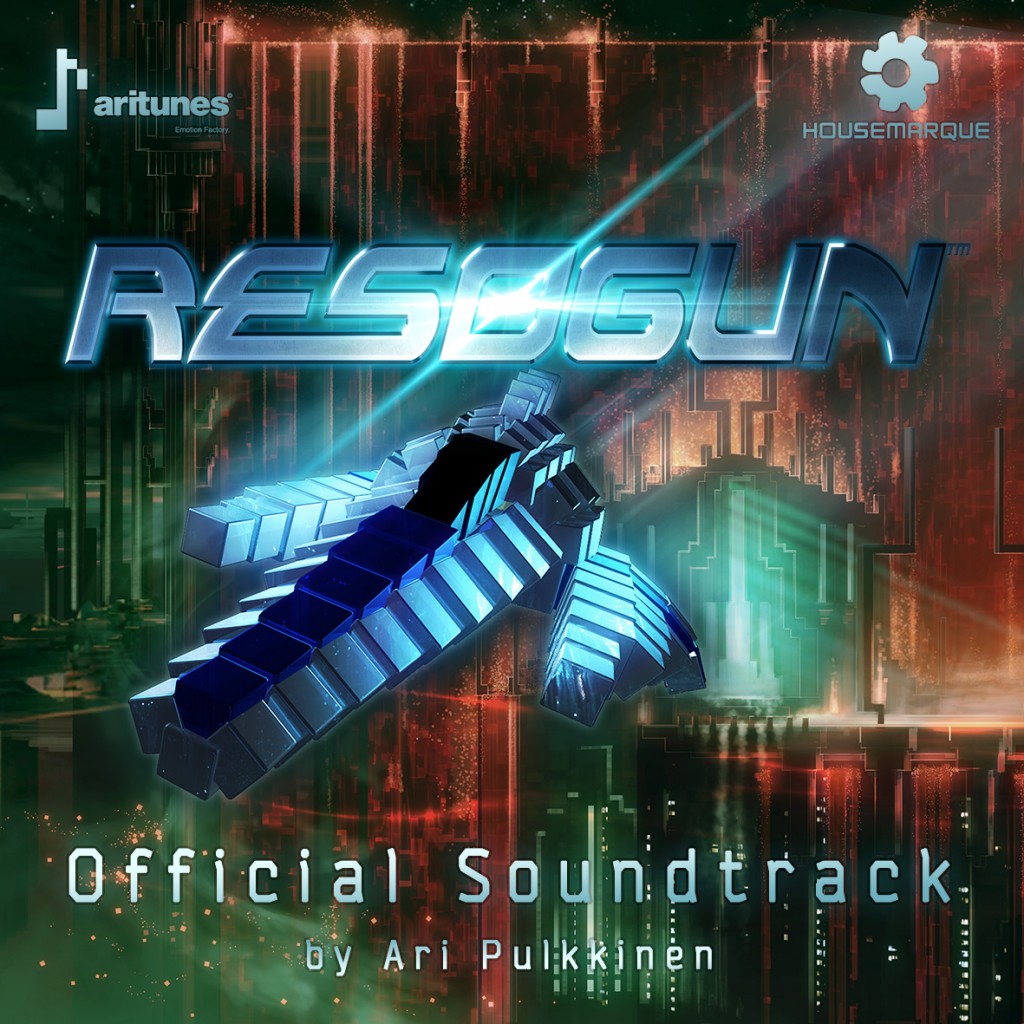 Unlike Pulkkinen’s work on the Super Stardust series, one of the first things I noticed was that each boss received its own unique theme, unlike the catch-all boss theme found on the Super Stardust soundtracks. All of them manage to impress in some way. “Rotatron” manages to give off a very industrial atmosphere with plenty of tension. The electro-inspired bass line works quite well with the melody, which is slightly on the heroic side, and the electronic accompaniment features plenty of manipulations that help give it a more robotic and unyielding sound. “Stormruler” definitely gives off more of a dance vibe rather than one what might expect for a boss theme; however, there are definitely moments that give off a slightly ominous air and the intense beats and crunchy synth tones definitely manage to impress. However, compared to the other boss themes, I find it a bit lacking in terms of atmosphere. “Cubetron” features a drum n’ bass soundscape with a cold, robotic atmosphere due to the unique synthesizer manipulations heard in the melody and accompaniment while “Doomsphere” is definitely an electronic affair through and through. It has a very industrial vibe, thanks in part to its heavy hitting beats, while the sinister synth melody helps create that sense of tension. Lastly, the final boss theme, “Serpentinus,” is a great fusion of orchestral elements and an intense beat. The brass definitely conveys a sense of danger while the pulsating beats and electronic accompaniment create this very industrial and cold atmosphere.

With the official release of the soundtrack also comes some new tunes featured in the expansions of the game. “Avernus” continues the style heard throughout the album; however, it really manages to surpass many of the tunes already on the album. The melody is top-notch and gives it an uplifting sound as well. “Exitium” doesn’t have as an engaging melody as some of the other tunes, although one is present and manages to capture the spirit of the soundtrack. This track definitely features some wonderful dance vibes and the higher toned synth sections really add a nice playful touch. “Phasmatis” is another solid entry to the soundtrack. It has an epic, heroic melody that is quite diverse, both in progression and in terms of synthesizer. Another top-notch melody is that of “Fabularis.” It features a great tempo and some interesting accompaniment, at times sounding quite retro and, at others, as if there is a Japanese instrument, like a shamisen, added into the mix. It’s definitely one of my new favorites on the album. Ending the new entries from the expansion, “Detrimentum” has a very cinematic sci-fi sound with a gloomy outlook.  The soundtrack closes with “Resogun End Credits”. The martial tone heard in the main theme is carried over, as is the fusion of orchestra and electronic components. Once again, the brass dominates the piece and manages to convey a lot of power, but at the same time, the tone suggests that things may not be over in the universe of Resogun.

For fans of Ari Pulkkinen’s work on the Super Stardust series, the Resogun Official Soundtrack definitely represents the next step in the evolution of Ari’s electronic prowess. There are plenty of modern electronic influences combined with catchy synth melodies to create a very futuristic soundscape and one that, in my opinion, surpasses his work for his earlier Housemarque soundtracks. This soundtrack is a must-have for fans of contemporary soundtracks.