From its humble origins as a trilogy of low-budget GBA visual novel adventure games, Gyakuten Saiban (Ace Attorney internationally) has expanded to numerous sequels and spin-off media while showing no signs of slowing down on either side of the globe. A narrative revolving around courtroom drama is not what most would immediately think of when describing a typical video game, but Ace Attorney’s cast of memorable characters and well-written plots have earned it a devoted fanbase. Music has played a key role in telling that story and the series has seen dozens of soundtrack releases. This latest arranged album is a live concert recording celebrating the series’ 15th anniversary performed by the esteemed Tokyo Philharmonic Orchestra which took place in May 2017. Ace Attorney previously saw a similar live album in 2008 performed by the same orchestra which went on to receive positive reception. Nearly a decade later, what has changed?

The concert opens with a medley of the series’ various “Objection!” themes associated with iconic protagonist Phoenix Wright. Its robust strings and tango-like rhythms are a joy to listen to as ever, but this arrangement is identical to the previous 2008 Ace Attorney orchestral album save for a brief extension at the end which includes the brassy melody from 2016’s Spirit of Justice. In fact, over half of this album spans material that overlaps with the 2008 recording. This is particularly apparent with “Great Revival ~ Miles Edgeworth” and “Maya Fey ~ Turnabout Sisters Theme” which more or less feel like carbon copies of their predecessors. The former is a stoic brass march that has a memorable theme, but the melody is so short that not even the Tokyo Philharmonic Orchestra’s variations can mask its simplicity. The performance of the theme for Phoenix Wright’s bubbly assistant Maya Fey fares slightly better with its charming Baroque-esque composition and spirited performances that are handed over to each section of the ensemble, but none of this is anything new for fans well-acquainted with previous performances.

A more drastic difference is the new take on the jazzy theme of fan-favorite prosecutor Godot. I have played the original 2008 recording so many times that saxophonist Hisatsugu Suzuki’s stunning solos are practically etched into my mind, so I was more than curious to see how the 2016 arrangement would hold up. The saxophonist here is not named in the album credits, but regardless of the musician, I found their performance to be airy with too much vibrato. Suzuki’s playing was subtle without being overly dramatic and he maintained much more harmony with the accompanying orchestra than this recording. It’s all perfectly listenable, but one cannot help but be disappointed knowing that a far better version exists. In contrast, the encore track “The Steel Samurai” comes off as stronger than the 2008 version with more convincing brass and orchestral reverb.

The album’s medley suites for the various games throughout the series are the strongest portion and there is a lot to like here. Returning once again from the 2008 concert is “Ace Attorney 1~3 Courtroom Suite” which as the title suggests, is a collection of courtroom tracks from the original trilogy. Bach’s Toccata and Fugue originally opened this arrangement back then, but here it’s been excised which is a creative decision that I’m fully behind since I always viewed its inclusion as out of place with the rest of the themes. The new performance itself additionally proves to be a much better take, improving upon something already great and being thoroughly enjoyable from start to finish. Everything from the imposing brass signifying the start of trials, to the subtle pizzicato of the cross-examination themes, to the adrenaline-pumping pursuit variations are all smoothly played by the Tokyo Philharmonic with conviction. The same can also be said for the “Apollo Justice Courtroom Suite” which is arguably even better than the trilogy’s arrangement due to the increased complexity of the melodies and subtle transitions that allow it to come across as one long piece instead of a series of different tracks. I could easily see it being used for a courtroom montage of testimonies being questioned, contradictions being pointed out, and plot twists being revealed. If I have one criticism of the performance, it’s that the Tokyo Philharmonic plays it a hair too fast compared to their 2008 take, but this is ultimately a minor quibble. 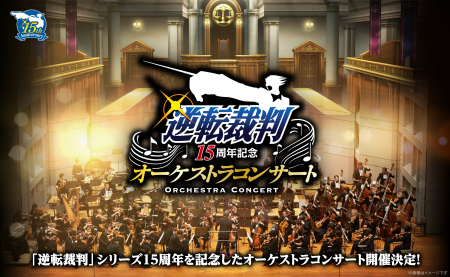 Moving on to what’s actually new, two medleys for the Ace Attorney Investigations spin-off games are presented. Unlike the main series which follows Phoenix Wright and his career as a defense attorney, these titles shifted the focus out of the courtroom and into the crime scene, featuring prosecutorial rival Miles Edgeworth as the protagonist. Noriyuki Iwadare returned to contribute to the franchise from this point onwards, and the arrangement of his own work for orchestra leads to fantastic results. “Meeting Suite” consists of character tracks across both games which demonstrate Iwadare’s talent for eclectic soundscapes. The energetic Eastern-tinged theme for Edgeworth’s assistant Kay Faraday opens the suite with bombastic calls between the woodwinds and brass. It transitions into militaristic opening of investigator Shi-Long Lang’s theme with the swinging melody performed on solo saxophone. The rest of the medley continues into the melancholic strings of judge Justine Courtney, carnival-like woodwind ballad of prosecutor Sebastian Debeste, laid-back brassy jazz of defense attorney Raymond Shields, and the proud march of Miles Edgeworth’s father, Gregory. The second arrangement, “The Great Path,” follows the same format as the other court suites with opening themes, cross-examination themes, and pursuit themes all covered. With a full symphony, Iwadare finally gives these melodies the true emotional resonance they deserve and listeners will definitely be pleased with the instrument variation.

After a long hiatus of Phoenix Wright being replaced with other characters as the playable protagonist, his return to the series with the fifth main game Dual Destinies signified his character’s increased sense of maturity and experience. This was also reflected with Iwadare’s complex score for the game which is fully carried over into the orchestral suite. The opening “Court Begins” theme echoes the musical shape of the original trilogy, but the confident brass hints at Phoenix’s increased confidence as a veteran attorney. The brief cross-examination moderato is performed in-sync between flutes, pizzicato, and percussion before being interrupted by the imposing character theme of prosecutor Simon Blackquill. Heavily inspired by Japanese sound, the wistful clarinet calls out to the woodwinds as repeated strings provide backing. After it runs its course, we return to the cross-examination theme performed in allegro cut short (in Japanese) by character lines of “Hold it,” “Gotcha,” and “Objection” yelled by the orchestra members itself, resulting in audible audience laughter. The excellent pursuit theme carries the suite to its riveting conclusion. “Spirit of Justice Courtroom Suite” follows largely the same format, with unique highlights being the violin solo of the court begins theme and appearance of detective Ema Skye’s eccentric character theme. While Iwadare’s scores for the fifth and sixth games are not my personal favorites, I was more than impressed with these arrangements. 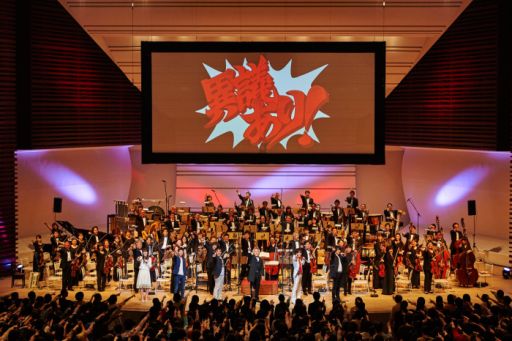 The best tracks saved for last are the two suites dedicated to the side-series Dai Gyakuten Saiban, another spin-off that brings the setting back to the Meiji era when Japan was opening itself up to the West. Ace Attorney in its localized form takes place in Los Angeles with references to Japan removed, but due to Dai Gyakuten Saiban’s Japanese influences being an integral part of the story, many have speculated this as the reason for it having no international release. Regardless, the soundtrack by Yasumasa Kitagawa and Hiromitsu Maeba received high marks when I reviewed it and it remains a fan-favorite even to those who have not played the game. The score’s influence from orchestral and chamber music made it a natural fit for a symphonic performance, and my expectations were easily exceeded. The first suite beings with the game’s brassy title theme, hinting at an adventure full of revelation and twists. “Joint Reasoning” follows, a brisk melody rife with rustic strings and decorated with triangle rings, picking up tempo as the melody progresses. “Court Begins” continues with a similar motif as the title theme, upping the brass and creating the atmosphere of a vast courtroom with high stakes. The cross-examination theme is tinged with French accordion influences, climaxing into a string cadence that leads into the memorable objection and pursuit tracks. The second suite is dedicated to Dai Gyakuten Saiban’s characters, my personal favorites being the Eastern march for Asougi Kazuma and tango melody for Sherlock Holmes performed on solo violin. The Tokyo Philharmonic brings everything to a close with the game’s castanet, brass, and accordion-infused ending theme in a passionate denouement.

Much of this review has brought up the previous 2008 album, but it is ultimately a necessary comparison in deciding whether or not this one is worth a listen. As with that, this release is a live performance which naturally means that all the imperfections associated with concerts such as audience coughing and minor orchestral blemishes are present in the recording. While this is to be expected, purists expecting an in-studio ensemble with the benefit of post-production editing and mixing may end up feeling disappointed. On the positive side, however, this concert generally supersedes the previous one in both performance and audio quality. There is a lot of reused content here, but with the exception of a few moments, most of it is generally performed better. The new suites are additionally spectacularly done and yet are again more proof of Noriyuki Iwadare’s arrangement prowess for orchestra. Flaws aside, this is a strong collection of symphonic work from the series and Ace Attorney fans would do well to add it to their collection.