We have heard everyone’s requests, and now the Xenosaga III soundtrack is out. The entire production would have filled 6 CDs. Thinking of a balance between concentration so that the album could be listened through and value so that more people will buy it, I selfishly ventured to ask Yuki Kajiura-san for a two disc set featuring the most memorable music from the project.

Both of us started from the second game, but I am very glad that both Kajiura and I were able to participate in the musical history of the “Xenosaga” series. I believe I love it as much as all of you fans. I will be happy if you accept this album as the diary of my love.

When the time came to make decisions about the music for Xenosaga III “Also Sphrach Zarathustra”, the track requests, how to use the music in the game and so forth, I understood that there was one person who had more of an affinity with the game’s worldview than I, and left everything as regards music to the original creator, Takahashi. Playing the completed game, I felt Kajiura-san’s affinity with Takahashi’s plan, and her music heightened the persuasive power of Xenosaga’s world. What do all of you think? I hope you will enjoy the world of Xenosaga through this album as well.

Many thanks! That is what I honestly feel right now. Due to backtracking on this end, close to 100 tracks of score had to be requested in under three months, and the schedule caused a lot of trouble. All of the music written under that tight schedule was truly “Xeno.” Honestly, how will the images and performances turn out? Regardless of how many times I felt that way about a scene, in the end Kajiura-san’s music saved me every time. As if music were the sustinance by which it continues to live, I feel today that Xeno is kept alive by Kajiura’s score. Perhaps all of you who bought this CD will feel the same way. 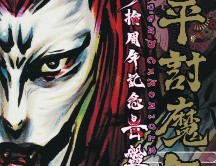