Thomas Boecker is a respected producer who has worked on the Symphonic Game Music Concert series, Merregnon trilogy, and Drammatica. He reflects on his role as the producer of Symphonic Shades.

Q: Mr. Boecker, how do you feel about your latest achievement in the world of video game music concerts?

A: Actually I could not be happier with the result. It was an incredible evening full of memories, full of emotions. Symphonic Shades is one of the concerts that I would love to get fully performed again. For me it was the best production of my career.

Q: You were talking about the quality of the arrangements. Did they live up to your expectations?

A: Absolutely. Words hardly can describe my feelings when I heard these arrangements live. Stunning! Mr Valtonen did an amazing job. Thank you very much, Jonne! Of course I would like to give credit to the conductor, the orchestra, the choir, and the soloists, too — without their great skills the music would not have been so touching. I was very impressed about their dedication and professionalism.

Q: This is an odd question, but what was your favorite title of the concert? Could you tell us why?

A: I will have to use the standard answer then: Everything was great! Every time I am listening to it I am finding a ‘favorite’, though, probably depending on my current mood. Right at this moment I would say X-Out, because of its superb orchestra and choir work, and the general modern approach of the orchestration. I have no problem in admitting that I was in tears when hearing the piece live for the first time.

Q: What was the atmosphere like during the concert? Were you able to experience it with the audience?

A: I was helping the stage managers, so unfortunately I could not experience the concert together with the audience. However, I could get an idea about the atmosphere nevertheless, and I would describe it as ‘unbelievable’. It was an evening that I will never forget in my life. No wonder that the orchestra musicians asked for more video game music, and more video game music fans, as the appreciation coming from the audience is so motivating, so strong.

Q: Nobuo Uematsu was guarded by two bodyguards in Stockholm during a PLAY! concert. In Cologne, on the other hand, the arrangers, artists, and even Mr Huelsbeck were free to walk around and nobody annoyed them. Did you expect such a harmony?

A: While we had several bodyguards, it is right that we allowed a lot of freedom to everybody. It was our goal to make it a concert where all people involved, no matter if composers, arrangers, soloists, or fans, could talk freely, to share impressions and to tell opinions. It was the first video game music concert for the orchestra musicians, so it was such an interesting experience for them to go into conversations with the fans.

Q: Did you feel any more pressure because of the fact that the concert was broadcasted live on radio?

A: At first I did indeed, but once the concert started, I somehow forgot about that fact due to the competent work of everybody involved in the production. It all went smoothly, and I felt that these people were so professional and experienced that I would not have to worry for a single second.

Q: Have you received much feedback from fans around the world about the radio broadcast? What about those who haven’t listened to game music previously?

A: We got so much praise and feedback — the WDR never got so much of fan e-mails before, actually! I think that we succeeded in bringing video game music to people who usually do not listen to this genre, and as mentioned previously, it was our goal to show to the world what video game music means.

Q: Can you tell us about the CD release? How is it going and what is the release date?

A: We hope for a release November/December 2008. We are pretty far in development in terms of the CD booklet, and the edit and mix of the music will start shortly.

Q: You are working with the WDR on a new concert project for 2009 already. Is there anything you can tell our readers about it?

A: As Mr Fechner of the WDR recently announced, there will be a big video game music concert on September 12, 2009 at the Philharmonic Hall in Cologne, Germany. It will feature Arnie Roth as the conductor again, the WDR Radio Orchestra and choir, and Rony Barrak. More than 120 musicians on stage. Jonne Valtonen will be the main arranger of all the music again — it is a real dream team! 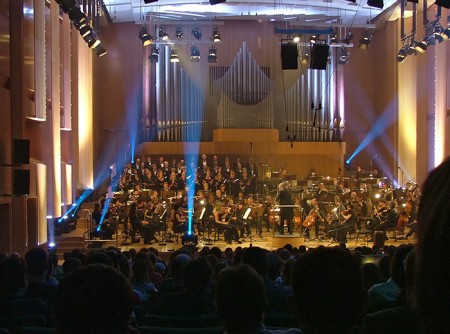 Jonne Valtonen is a European game music composer well-known for his work on the Symphonic Game Music Concert series. He reflects on his role as the main arranger and orchestrator for Symphonic Shades.

Q: Mr Valtonen, arranging and orchestrating music at home is one thing. How did it turn out live, performed by orchestra and choir? Was it what you had in mind?

A: Actually it was quite close what I had in mind. After the music is written, it is so wonderful to see all the professionals breathe live into the noteheads and rests. I think it is propably the best sensations in the world, at least for me!

Q: It might be a difficult question, but if you would had to decide for one favorite title, what would it be and why?

A: I really like Light at the End of the Tunnel. Even though it is very structured, it still seems very free. The piece itself is very static, but there are a lot of things happening under the music. This is nice as the piece is originally for a short film that is about a suicide and loneliness. So everything seems very still, but there is a lot going on in fact. I really do not know why I like it the most. I just do. It also has one of the strongest melodies by Chris Huelsbeck so it was just a pleasure to put it as front as possible.

Q: Working with orchestras is a huge learning experience for composers and arrangers alike. What did you learn from Symphonic Shades in Cologne?

A: It is always interesting to see how well all the musical ideas transmit using only paper. On the rehearsal situation there is not too much time to make adjustments, so if everything sounded “right” for Symphonic Shades from the beginning I think I succeeded. There is a lot of tradition behind an orchestra and how they play. This is something you definetely have to know well to efficiently write the music.

Q: It was your first co-operation with conductor Arnie Roth. How did it work out?

A: It was great! Arnie Roth knows a lot of the pop side of music, and you can really hear it — in a good way. Like in the first piece of the concert, Grand Monster Slam, it was exactly as it should be — tight and pop-classical. The arrangement is very John Williams-esque and, since Arnie Roth has also conducted a lot of his music, the performance was spot on. All the triplets and quadruplets playing at the same time, playing weak rhythm accents strong, etc. is something what Arnie Roth translated to the orchestra, and did so well. Besides everything else, of course. He was also very sharing about how to make things more efficient in the future, so I really learnt a lot from him.

Q: We heard about a new concert in Cologne on September 12, 2009. Will you be involved in the arrangement of the music again?

A: Yes, and it is going to be so great! I am much looking forward to it.

Q: Besides your involvement in video game music concerts, what other projects are you currently working on?

A: I just finished composing a Tango piece that the WDR (Western German Broadcasting Cologne) ordered from me. I also finished music (arranging and orchestrating) for a huge Japanese video game to be released on PlayStation 3. I still have a couple of smaller games on the table, but after those are done, I am trying to have a vacation. At least for a couple of months and then it is working time again!

Winfried Fechner is the orchestra manager of the WDR Radio Orchestra. He was responsible for much of the administration for Symphonic Shades.

Q: Mr Fechner, it’s done: a full concert with video game music. What are your impressions of “Symphonic Shades”?

A: It was a grand evening. Firstly with incredible music, secondly with a highly dedicated orchestra, and of course, there was an unmatched audience. It was a celebration of sounds and a celebration of wallow.

Q: Did you get any feedback from the orchestra?

A: The orchestra musicians told me after the concert it was fantastic to perform for such an audience. They studied and performed the music with great excitement under the direction of Arnie Roth. Their final statement: More of it, please. More of such music and more of such attendees.

Q: Would you present music by Chris Huelsbeck again — or maybe even dedicate another concert to him?

A: Yes, I would be sincerely glad to.

Q: Do you think that scores from video game music could be performed as a part of regular orchestra concerts one day?

A: Yes, and I will do that in the future. We will include video game music into the concert program of our next season. There are many similarities, sounds, and melodies that fit well together in a concert program. I am much looking forward to trying it out.

Q: September 2009. Cologne, Germany. Anything you can tell us about it?

A: Next year in September, the gamescom trade fair will open in Cologne. For September 12, 2009 (Saturday), we will be at the Philharmonic Hall and we will present a great concert with video game music. It will include the WDR Radio Orchestra, the WDR Radio Choir, Arnie Roth, Rony Barrak, and, not to forget, Thomas Boecker, my right-hand man for all these kind of projects. It will be an unbelievable concert!