Atsushi Shirakawa, better known as TENMON, is an acclaimed yet elusive composer. The artist began his career at Falcom, working on franchises such as The Legend of Heroes and Brandish, before achieving widespread attention for his intimate scores to Makoto Shinkai films such as Voices of a Distant Star and 12 Centimeters a Second. These days, he combines work on visual novels and theme songs with penning his own original albums through his personal label.

In this Patreon-funded interview, Shirakawa provides a rare insight into both himself and the Falcom Sound Team J.D.K. Through his concise insightful answers, he gives insight into how his career developed and how his game experiences helped prepare him for composing cinematic pictures and theme songs. He also notes how his recent album releases have provided him with a valuable opportunity to freely express his musical tastes away from the restraints of his other works.

VGMO: Thank you greatly, Atsushi Shirakawa, for interviewing with us. To start, how would you describe your musical background and influences? Do parts of your upbringing influence your music and methods today?

Atsushi Shirakawa: Thank you very much. I am almost entirely self-taught in music, so I never studied it formally. I’ve always loved video games, and I think game music had a considerable influence on my style.

VGMO: You spent a decade of your career working at Nihon Falcom. What led you to join this company? What were the first games that you composed/arranged for and what musical styles did you use?

Atsushi Shirakawa: In my student days, I admired Falcom above all other PC game companies. Just as I was graduating from high school, Falcom sent out a hiring notice for music staff, so I immediately sent off the music that I was creating on my PC at the time, and was hired for the job. 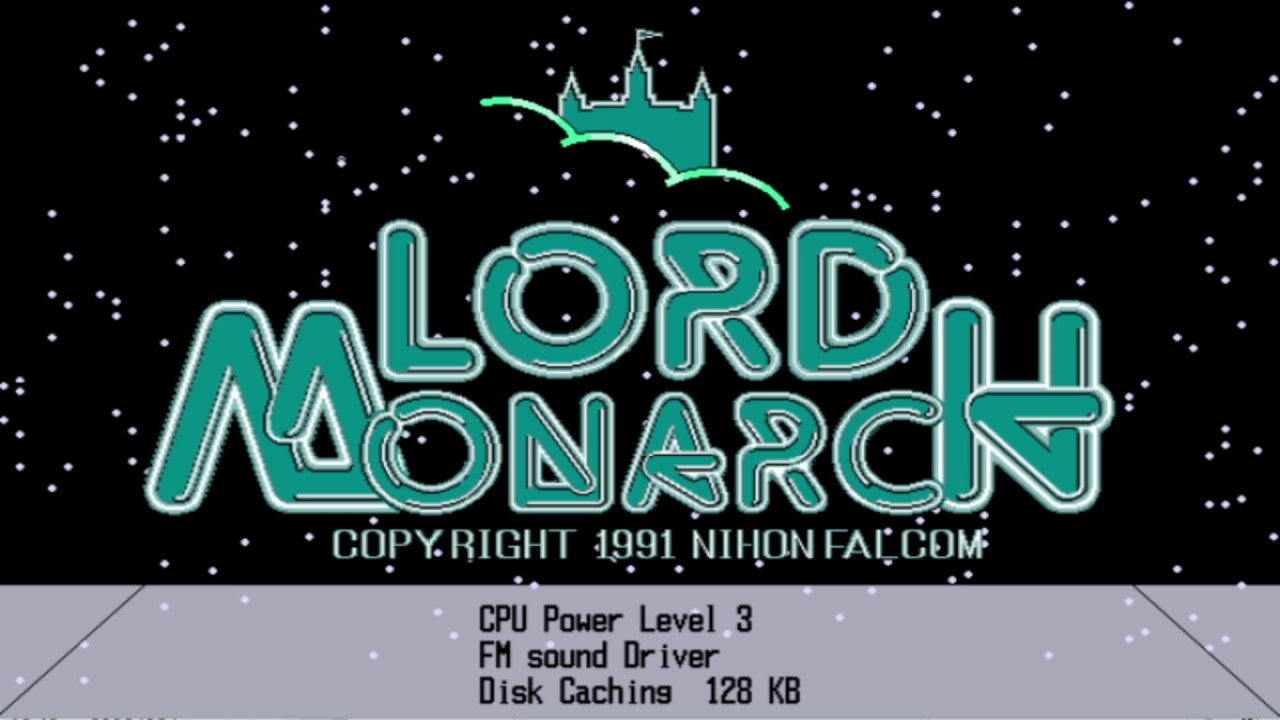 My first composing job was writing several pieces for Lord Monarch. At the time I was limited to the built-in PC sound for composing, so I could only use six voices at a time.

VGMO: The scores of Falcom Sound Team J.D.K.. are known for being technically innovative. Do you remember how you and others created music during that period? Did technical constraints impact your musical process? How did this change during your time there?

Atsushi Shirakawa: At that time, the technology that most caught my attention was the ability to change timbres smoothly in the middle of a piece without any kind of slowdown whatsoever, and I was also impressed by the improvements in the timbres themselves.

I touched on this in my previous response, but composing in those days was done by combining three channels of FM synthesis and three channels of PSG. Within those technological limitations, I think I was able to study the most basic elements of music: the melody, the bass, and the rhythm.

It was at the border of that era when the proliferation of CD-ROMs would make it possible to store conventional music, and we were starting to change over to a MIDI production environment.

VGMO: You worked with various colleagues during your time at Falcom, including Mieko Ishikawa, Naoki Kaneda, Hayato Sonoda, and the late Hirofumi Matsuoka. Could you tell us more about how the team worked and evolved over the years? What was your interaction like with other team members?

Atsushi Shirakawa: Usually, two people would be in charge of the music for a given title. Following the music list provided by the project team, they would split the composition duties and proceed from there. Unfortunately, those staff who were deemed to lack the capacity to work on the music were released from the team and would end up working in another area.

Each piece was created on an individual basis, and there were pretty much no examples of members collaborating on a single composition. I personally ended up working with Masaru Nakajima quite often. 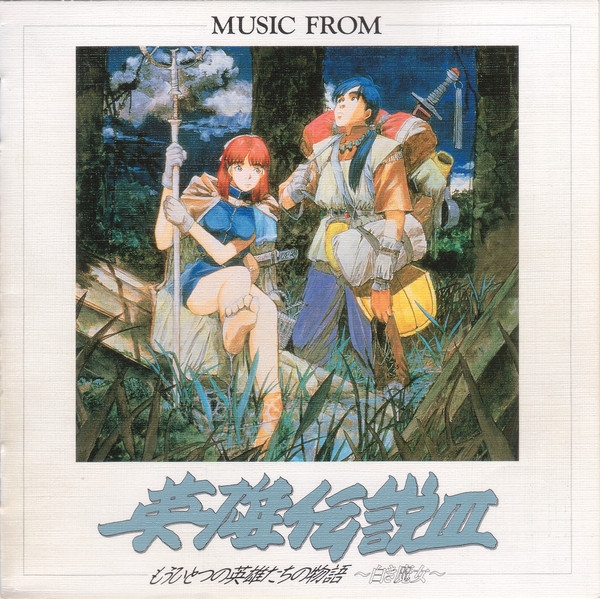 VGMO: You’re particularly known for leading the musical composition of the Gagharv Trilogy of games in the The Legend of Heroes franchise. Can you tell us how you designed the trilogy’s soundtracks to fit the story and world? What themes and styles interconnect these scores?

In contrast to the music I had written in the past, I was able to participate in the play-testing process, so I created the music that I personally required for my experience as a player. I found it very fulfilling to create music spontaneously of my own accord, although I continued to write music to the requests of the project team as well.

It also helped that the game itself excelled in terms of its story and presentation. Because the game was so story-centric, it felt like writing film music, finding the kind of music that was necessary to enhance a given scene.

VGMO: Your music at Falcom has been adapted for various soundtrack releases, arranged albums, and live concerts. Could you share your memories about these albums? For what reason were Falcom Sound Team J.D.K. members not individually credited per album? In particular, do you have any memories of the company’s MIDI Collection series?

Atsushi Shirakawa: At the time, I greatly enjoyed the experience of having my music arranged by other professional musicians. I wasn’t involved much with the MIDI Collections, so I don’t have many memories of them.

I think that the individual members were not credited by name because we wanted to put the focus on our combined work as a team. It also likely prevented any disputes from occurring about whether the amount of work a given individual did was fair or not. 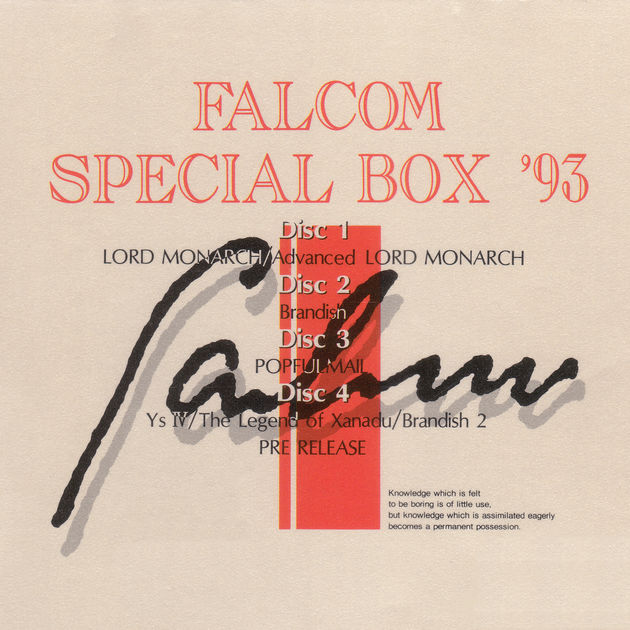 VGMO: During your time at Falcom, you also worked on a range of other franchises. In particular, can you share your experiences working on Brandish, Popful Mail, Vantage Master, and Zwei!!, as well as Ys IV: The Dawn of Ys and Ys V: Lost Kefin, City of Sand?

Atsushi Shirakawa: Brandish was the second project I worked on after joining the company following Lord Monarch. I was quite moved to hear my own music played.

For Popful Mail, the ending theme I wrote is a favorite of mine. I became aware of my ability to write the kind of melodious track that would work with vocals. In Zwei!!, I composed a lot of music for short movie scenes. The experience turned out to be quite valuable later on when I began to compose film scores.

For Ys IV, I was not really involved in it. I think I was participating in other projects at the time. I also wasn’t involved in Ys V [editor’s note: this is an interesting discrepancy from the game credits, which list him].

VGMO: As you alluded to, you eventually began working with fellow Falcom employee Makoto Shinkai on movie projects including Voices of a Distant Star and 5 Centimeters per Second. What led you to collaborate? How did the business and creative processes compare to those at Falcom?

Atsushi Shirakawa: Working together with Shinkai-san on the opening for Falcom’s Legend of Heroes V: Song of the Ocean [editor’s note: renumbered III in the English release] marked the beginning of our relationship. 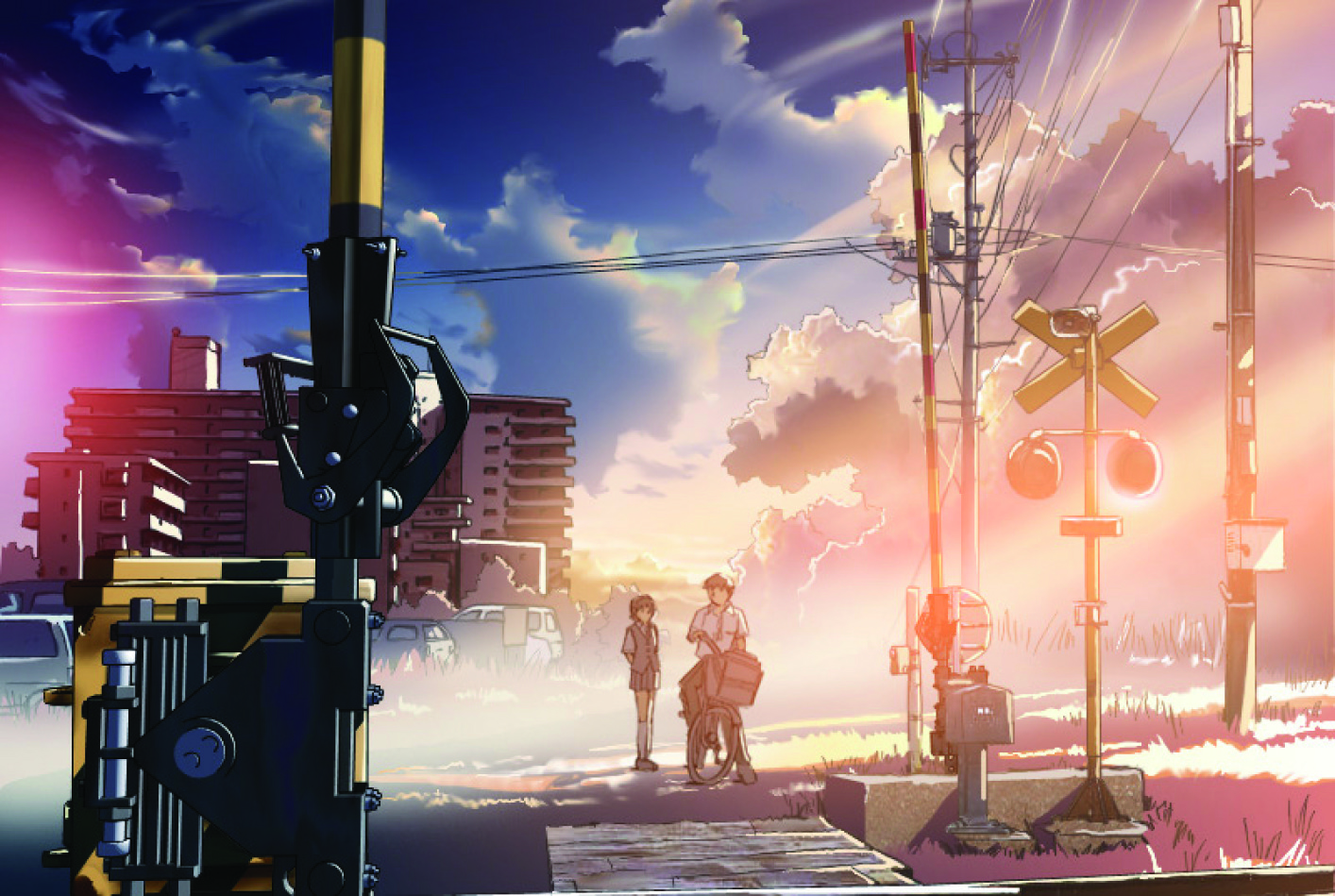 Afterwards, he reached out to me to ask if I could write music for his short, She and Her Cat. Even though it was in monochrome, the experience of writing music to an actual film was extremely refreshing. There was still nothing of business about it.

VGMO: Your cinematic scores with Makoto Shinkai feature gentle, refined acoustic sounds. Can you elaborate on how you developed this approach? How was this adapted for the album Promise?

Atsushi Shirakawa: At Shinkai-san’s request, I employed a simple piano sound, or the sound of the heroine’s violin in The Place Promised in Our Early Days. He doesn’t especially like the sound of digital pianos or electric pianos, even though they are from the same family. If there was a sound that was out of place in the world of the film, even slightly, I would have to fix it.

As for the album Promise, the basic idea was to employ an orchestra, and I didn’t provide any input regarding the arrangements.

VGMO: You’ve further expanded your scope by producing vocal albums through your label Densou-Gakudan and companies like Minori. Can you tell us more about these projects? How does your approach to songwriting and instrumental composition compare?

Atsushi Shirakawa: It is my main work at present, I suppose. I am always producing game opening themes. The opening songs from minori Co., Ltd. are more in line with the head of the company’s tastes than my own.

It takes a lot of work to produce a vocal track, and it can be quite difficult. Also, you could call it a template, but there are certain restrictions on the form of songs through time constraints and so on that make it impossible to compose something too far from the norm. 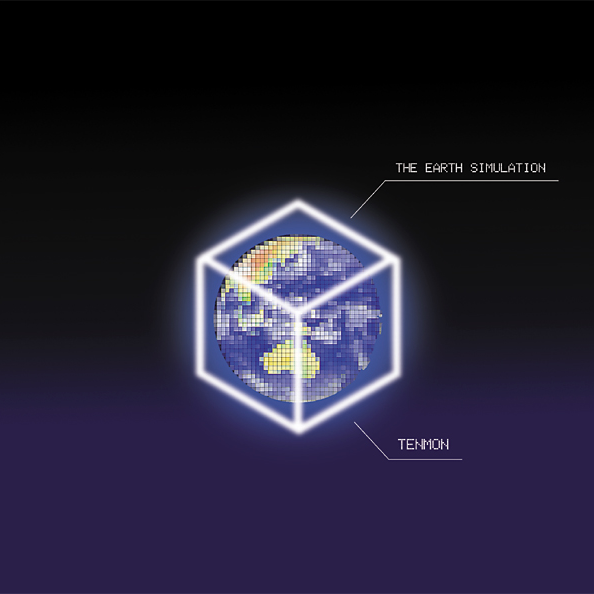 VGMO: Recent CDs such as The Earth Simulation nevertheless show an experimental side of your music. What concepts and themes do you explore when producing albums for Densou-Gakudan?

Atsushi Shirakawa: Densou-Gakudan was based on the overarching concept of being able to create without any limitations, on the basis of my free inspiration alone. It is a self-produced label, so I have a sense that I can create freely.

I personally love synthesizers, but film scores don’t offer many opportunities to use them, so with Densou-Gakudan I have the chance to focus on synthesizer sounds for a change.

VGMO: Nevertheless, you also continue to be active as a video game composer through Minori’s visual novels, such as ef – a fairy tale of two and 12 no Tsuki no Eve. How did you come to develop this collaboration? How would you compare these soundtracks to your other work?

Atsushi Shirakawa: I’m currently in an exclusive contract with minori, so I produce music at their request. It’s my main source of income to earn my livelihood.

Although visual novel scores are technically game music, you have to focus on the novel element and pay close attention to the tempo of the music at all times. If the tempo is too fast, the music will interfere with the dialogue. You always have to be careful to use the appropriate tempo and the appropriate number of instruments. That’s the biggest difference from other kinds of soundtrack work. 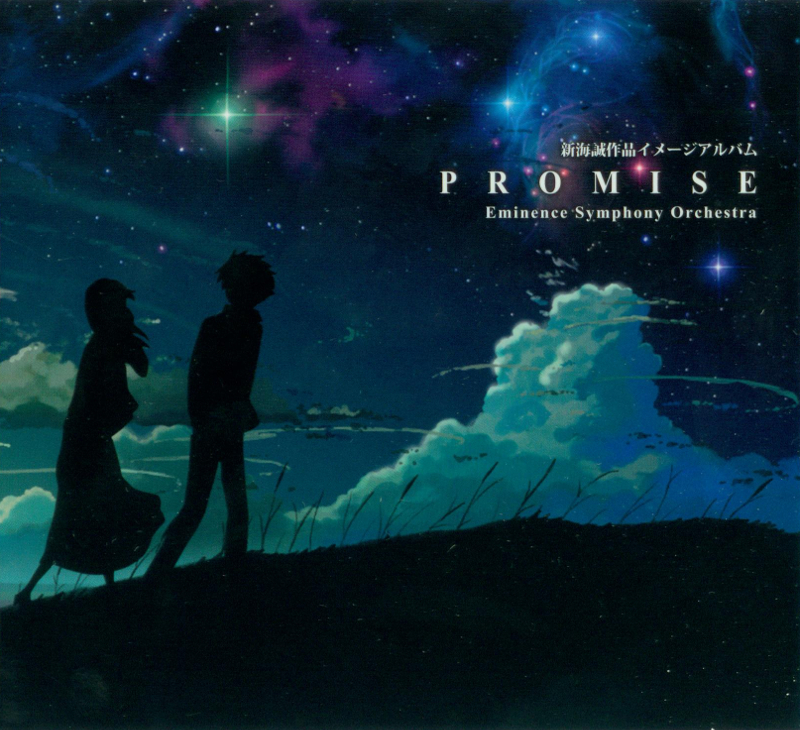 VGMO: Thank you again for your time speaking with us, Atsushi Shirakawa. What closing thoughts you wish to share with fans and readers? Which upcoming projects are you most excited about?

Atsushi Shirakawa: I keep thinking, “if only I could work on another anime project.” I’m just not getting any offers for those jobs anymore, because my break with director Shinkai has been more thorough than I had anticipated. It’s unfortunate, but at the same time I’ve come to accept it as the end of an era.

Thank you to all of the readers out there. I think it is a wonderful thing that my music can transcend national boundaries and reach others. I am grateful for that.

Thank you all very much!