Across the next few weeks, we will publish a series of English translations of interviews with those involved with Symphonic Shades – Huelsbeck in Concert. The German versions of the interviews can be read at the official website for the concert. The following are interviews with arrangers Jonne Valtonen, Takenobu Mitsuyoshi, and Yuzo Koshiro before the concert.

Jonne Valtonen is a European game music composer well-known for his work on the Symphonic Game Music Concert series. He is the main arranger and orchestrator for Symphonic Shades.

A: Yes, this is true. When I was thinking how the Gem’X piece should be presented, a special idea came to my mind. I remembered a composition seminar that I attended a long time ago, where we played Steve Reich’s “In C” piece. So I took that as an inspiration. I took all the elements (melody, harmony, rhythmic motives) and made little one bar boxes out of them. Then I stretched these little boxes to different asymmetrical meters, like 3-5-7-9-11-13, etc. and put these on top of each other to have different polyrhythmical situations. The boxes sort of travel in their own ways and then they always meet up in the chorus. So basically this piece is written out box improvisation for the orchestra in the style of Steve Reich’s “In C”. I also tried to make it light since so much of the concert is quite brass heavy, which introduces ceramic cups played by spoons for example.

Q: Will The Great Giana Sisters be equally unique?

A: I have been studying and playing jazz for some years now, but for this one minute part I studied big band and jazz arranging for months. Pretty insane, but I really wanted to do that and I think it came out quite nicely. The piece has quite different moods so it might be considered cinematic in that way. Also the in-game music part I did adds some “wacky” stuff to reflect the gameplay as well, so that part sort of drops into this sound effects and jingles musical situation and then swiftly switches back to the original music. For the ending, I tried to create this kind of “mission accomplished” feel to it — the feeling that you are coming home so to speak after all the drama that has been going on before, and you finally can take a rest.

Q: Light at the End of the Tunnel is one of your personal favorites. Could you please explain?

A: As mentioned earlier, the concert is quite brass heavy so Thomas Boecker and I decided to make some pieces more easier to prevent ear fatigue in the concert. This is as a first explanation of the piece. The piece was originally written for a film that is about suicide and loneliness, so I tried to capture that emotion. The music tries to break free and grow, but is then suddenly and abruptly diminished again to very small elements. By doing this I am trying to get a big contrast to underline the loneliness. There are cello and violin playing solo while the rest of the orchestra is mimicking wind, so you have this one lonely melody line playing in the wind. Also one part starts by tubular bells played by very soft mallets which just gives this hum and then one part rises from that. Actually I organized that part a bit like Gem’X although there is not really any audible reference. I am really anticipate hearing this live. Especially I think the windy part with the lonely solo will sound nice.

Q: X-Out does not make use of ceramic cups, but the original music is — according to Chris Huelsbeck — “bubbling”?

A: Yes, the beginning of the original X-Out music introduces this soundscape, which I tried to imitate as good as I was able to the orchestra. The original piece has this bubbly electrical sounding enviroment which I tried to imitate by choir singing “ffff” electrically, reverse cymbals played on timpani, cymbals played by bow, and cellos playing an overtone harmonics, etc. Later in the piece the choir is also singing and modulating “sss” — letters to get this hissy soundfield, which they then morph to “hhh”. There is also conventional singing, but this piece features all kinds of interesting sounds. Like the trombones in one part are singing a different note to their instrument than what they are playing, so this introduces this very metallic resonance. But fans should not be intimidated! The piece is loyal to the original and it features quite a lot of fanfares.

Q: The piece that people are probably looking forward to the most is Turrican II. What should fans expect?

A: As the solo piano already presents the familiar Turrican 3 themes quite faithfully, I thought of not doing the same thing again in the same concert, but to go a bit further with the Turrican II piece. I love the themes a great deal and I love classical music, so I asked myself: How would the Turrican themes have sounded in different musical eras? How would the composers of the romantic era, the impressionistic era, the classical era, and the more modern era have treated the themes of the original Turrican piece?

Over the past months, I worked on my idea, and the arrangement now takes the listeners to the musical journey that I had in mind.The first theme comes in form of romanticism. It is presented like it is on the original music and then gets developed. Right when the theme is being developed and is reaching its highpoint, a cut happens and the music is swifting to impressionism. The second theme comes in its original form again and starts developing and when the theme is on its high peak a cut in the music happens and we jump to neo-classicism.

The third theme is a bit more vaque here as the snare drum that starts the original piece gives its rhythm to this section and the theme gets a pseudo Beethoven and Mozart treatment. The final part is where the theme comes from its full glory. This is the most faithful to the original music and also ends the piece with a Mahlerian kind of grand ending. The ending changes the theme to major, which actually is an overtone chord which sort of hints in the future, so this little hint of modernism is present in the end. 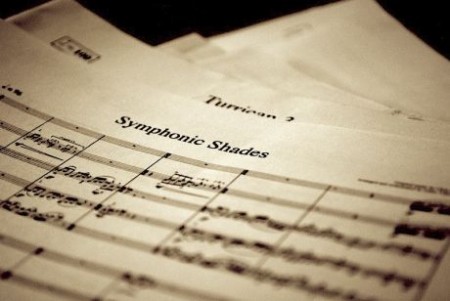 Takenobu Mitsuyoshi is Sega composer well-known for his work on the Shenmue, Virtua Fighter, and Daytona series. For Symphonic Shades, he has arranged the Apidya II suite.

Q: Mr Mitsuyoshi, your music has been performed last year at the Gewandhaus concert hall in Leipzig. Can you tell us more?

A: Yes, and it was fantastic! They performed a suite of music from World Club Champion Football, a game series that it quite popular in Japan. In Germany, the title might be not as well-known as it is in my country, but it was always my goal to compose music that also works out of the game context and entertains people.

Q: What is the difference between German and Japanese video game music concerts?

A: Seriously, I think both concerts have their own unique style. Maybe it is possible to say that the concerts in Leipzig are a bit more classical, not only because of the ambience of the Gewandhaus concert hall in Leipzig. In Tokyo, I was performing in a rock band, which was a part of a major 2007 event.

Q: For Symphonic Shades, you arranged music from Apidya II. What can we expect?

A: When I listened to the music for the first time, I thought: Actually I do not have to arrange anything, the style is already quite orchestral! I analysed the original music carefully. Of course I gave the arrangement my own style, but I tried to stay close to the original as much as possible. By the way, I especially like the track in the soundtrack that plays at the end, once you defeated the last enemy.

Q: The choir is going to sing in Japanese language. Is that right?

A: That is correct! I had that idea when listening to the original music. I thought it was already very fitting for the use of lyrics. Fans should try to catch the word “Ai”. This means “Love” in Japanese. My lyrics are following the original story of the game. Love is the motivation of the main hero to set out for his dangerous adventure.

Q: You have been to Germany quite often. What are you looking forward to the most?

A: I love Germany. I am looking forward meeting my friends. I am eager to enjoy the German food and, of course, the beer!

Yuzo Koshiro is a Japanese game music composer known for his work on Ys, ActRaiser, and Etrian Odyssey. For Symphonic Shades, he has arranged the Jim Power in Mutant Planet main theme.

Q: Last year, you attended the video game music concert in Leipzig, together with your colleague Takenobu Mitsuyoshi. Can you tell us more?

A: Yes, I was very happy to be invited. I really like the atmosphere of the Gewandhaus and its surroundings, because it is the place where a lot of historical concerts have been performed. I think that the fans were so friendly and they listened to the concert seriously. Sometimes I was amazed that some people were speaking fluent Japanese and asked me for autographs!

Q: Does the Japanese audience take an equally serious approach when it comes to listening to video game music concerts?

A: Yes, I think so. A difference might be that Japanese people are too quiet compared to German people. I am talking about the applause and the reactions, of course; there’s no question that people have to keep quiet during the performance itself. It is hard to find out whether Japanese audiences are enjoying the concert, but they usually talk about performances enthusiastically on the net.

Q: How did you approach the arrangement of Jim Power in Mutant Planet?

A: I arranged the opening theme. I really like it! I tried to preserve the original theme and its structure as much as possible when I made the arrangement. However, I adopted an impressionistic approach to the orchestration. I am confident that the fans will enjoy it!

Q: Was it difficult to make the arrangement?

A: It was kind of difficult because it was originally rock music.

Q: Soon you will go to Germany…

A: I am very excited to come to Germany each time there is a concert. I love the beautiful scenery out there and historical constructions like the old castles in Dresden. I am very much looking forward to the German food!