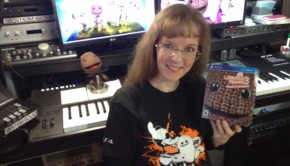 Winifred Phillips has worked on a large number of major video game franchises: LittleBigPlanet, Assassin’s Creed, God of War, The Sims, and Total