Susie Benchasil Seiter is a rising star, in terms of orchestration and conducting. She is currently the lead conductor on Pokémon: Symphonic Evolutions and co-orchestrator of the concert with her husband Chad Seiter. She is also Austin Wintory’s orchestrating partner, helping on several of his scores, including Journey. Her other orchestration credits range from the Arkham, Diablo, and God of War series, to films such as Jurassic World, Star Trek Into Darkness, Minions, and many, many more.

In the second part of our ongoing Pokémon Symphony coverage (our interview with Chad Seiter and Jeron Moore can be checked out here), Susie Seiter talks a little about her experience conducting and orchestrating Pokémon: Symphonic Evolutions, and also delves into some of her other industry projects. She also gives some very telling advice of being bold in this very competitive industry and going for your dreams.

Julius: Nice to meet you, Ms. Seiter! Thank you for having me here at Pokémon: Symphonic Evolutions. The concert looks great so far, and I am excited to hear you conduct tonight.

Julius: Let’s start by talking about your background with conducting and composing.

Susie Seiter: Sure! I actually started as pre-med in college, and I changed to music. It was never my intention – I never dreamed of doing this when I was a kid. It just happened to be something that I was good at. So, I started conducting in college and I went on to conduct and teach in high school. I taught several groups there for about six years, before moving on to teach in graduate school. My main focus is actually orchestration, so it makes sense that I conduct what I orchestrate. So that’s what I’ve been doing, and this is my second tour now. Additionally, I conduct in the studio for film score sessions.

Julius: You’ve had quite the history of working as an orchestrator on game scores. You’ve worked with Austin Wintory on Journey and The Banner Saga, and you’ve worked on newer games like the Batman: Arkham series, and several others. Is there anything you’d be willing to share about on those past collaborations and the more recent ones as well?

Susie Seiter: I also orchestrated the LEGO Jurassic World game with Chad too! I want to say that every relationship is different, as far as the orchestrator – composer relationship is concerned. I work with people that I really like. Austin and I for instance, have been working for about 6 years, and I like him as a person. As a general rule, I only work with people that I really like, because ultimately I’ll be working very hard for them. Things would be last minute at times because of the nature of deadlines, and I know that if I don’t like the person I’m going to be miserable! So, I’m perfectly happy to pull all-nighters and get work done because I like that person. It’s the same case with all the composers I work with.

Julius: You’ve also been working as an orchestrator for several shows and film scores, and I’ve seen your name pop up in quite a few credits recently!

Susie Seiter: So, I recently orchestrated on Minions. I wasn’t the lead orchestrator on that – there are actually a lot of orchestrators on that. The lead orchestrator is actually our conducting sub. So the guy who conducted Pokémon: Symphonic Evolutions at the San Diego Comic Con show was the lead orchestrator on Minions! We all help each other out, because sometimes there’s just a volume of music that needs to get done in so little time that we all need each other. I also just worked on a movie called Voice From the Stone, which stars Emilia Clark from Game of Thrones. That’s a smaller film, an indie, but it’s huge in terms of its scope – it’s filmed in Italy and it’s a very beautiful film. Hopefully it’ll get distribution. So, summing up, I work on blockbuster films, like Minions, and then also on smaller film scores from independent films. 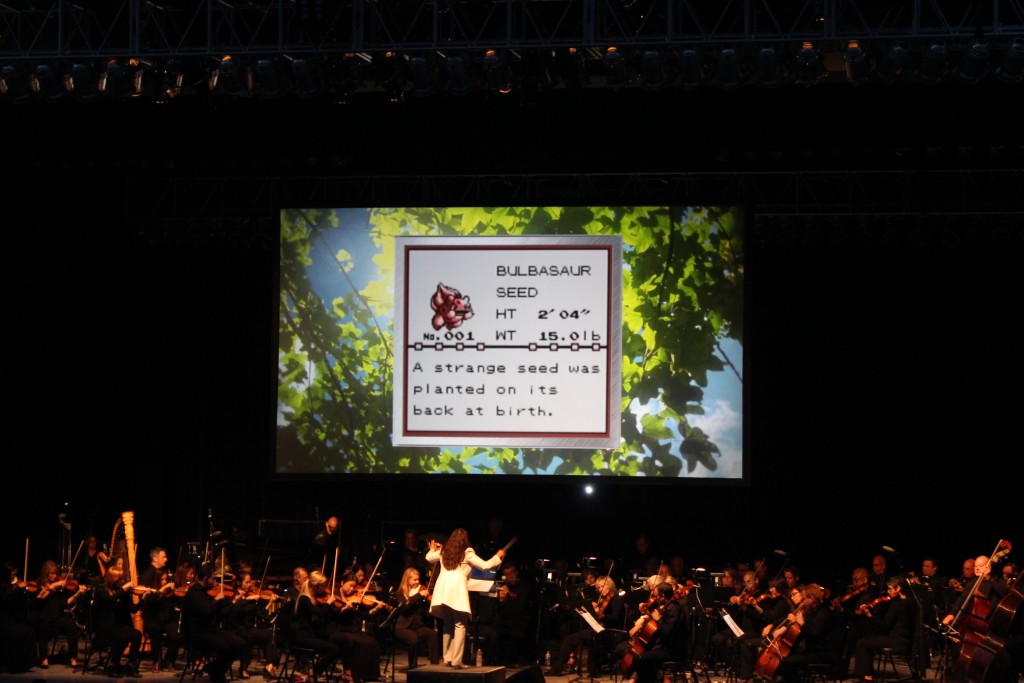 Julius: What has your experience been like with this Pokémon concert?

Susie Seiter: The fans are just so amazing! They are so gracious about the entire experience and it’s just been overwhelmingly positive.

Julius: Have you worked directly with Chad on any of the pieces that we’re going to be hearing tonight?

Susie Seiter: Yeah, all of them! He arranged them and I orchestrated the full concert.

Julius: What challenges do you experience when you’re on a show like this? Is there anything specific that you have to do to get ready for a show?

Susie Seiter: I do some breathing exercises and meditation. It helps me be more natural on stage, because I do get anxiety when I look out at the audience, see a lot of people, and get overwhelmed. So, quieting my mind and having that time, that quiet time before a show is really important to me. It helps my performance!

Julius: And how do you interact with the orchestra, especially since you’re meeting so many different musicians from town to town?

Susie Seiter: I always introduce myself, I usually try to get to everyone and shake their hand. I show up to rehearsal early and shake their hand, and I usually end up answering some questions that they have, since they’re looking at the music for the first time. So that’s really the best way for me to go in and work with 80 strangers, before leaving them. You just have to meet them on equal ground and work together with them. 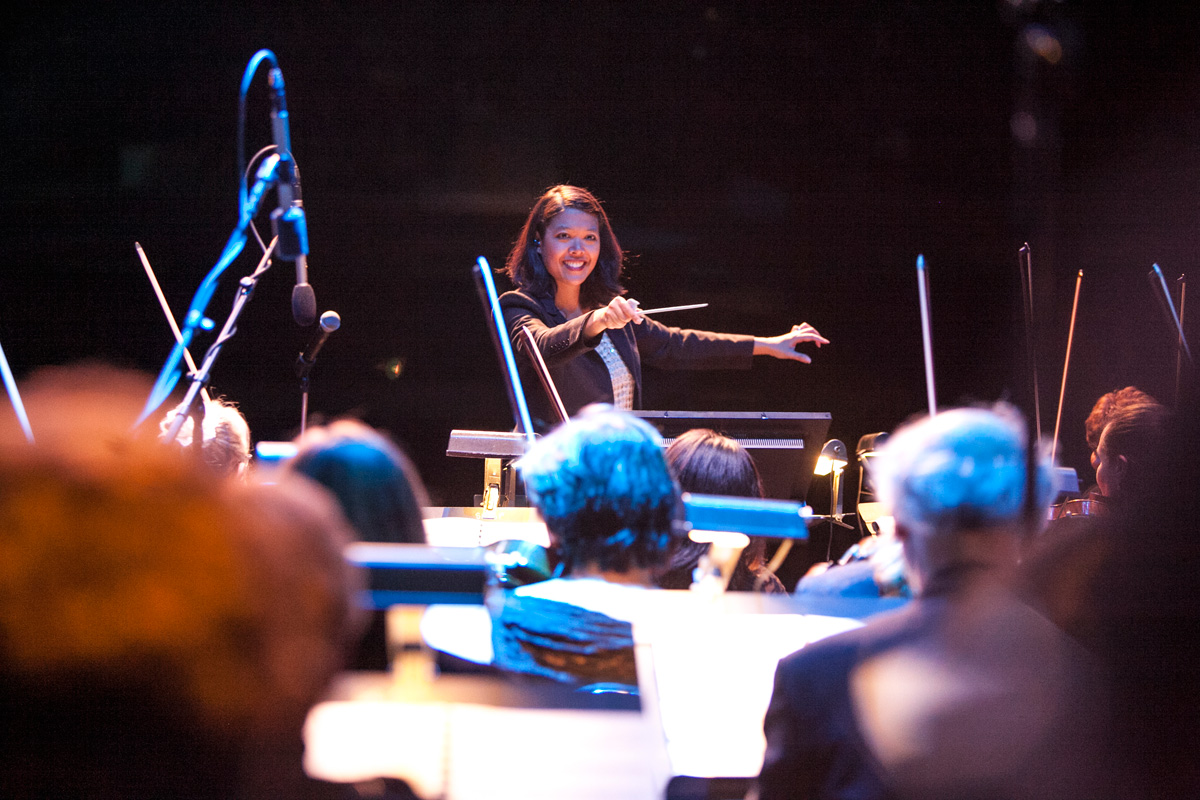 Julius: The show also employs a pre-recorded electronic track. Is it hard to coordinate that, while you’re conducting a live orchestra?

Susie Seiter: Sometimes. There’s a delay with the electronics in the hall – and every hall is different. There’s always a delay, so we have to stick to our guns. We have a click-track, but we can easily get distracted by the electronics. So, yeah, that definitely presents a challenge.

Julius: What are some of your inspirations when it comes to music in interactive mediums, be it film or video games? Is there anything that influences the way you conduct and compose?

Susie Seiter: Well, I’ve done a lot of workshops where you’re encouraged to show the music and not just beat the time, so I’m always thinking of that: of showing the music and showing the phrasing and character of the music, rather than just showing the time. They have the time, but they need more of the character that needs to be conveyed in gestures.

Julius: Has there been any special moment that has come out of interacting with this huge Pokémon fanbase?

Susie Seiter: Recently one event that stuck out to me was that we had a guest conductor today, who had won a YouTube competition and she was the biggest Pokémon fan. She stood up in front of the audience and she told everyone how much she loved Pokémon. She broke down in tears and that was so touching to me, because people love this franchise. It was so lovely of her to convey that emotion, because she was a shy girl, had probably never been up in front of an orchestra and has never experienced an orchestra, so what an overwhelming experience to have!

Julius: Such a great memory for that girl to have! On that note, do you have any advice for young artists, musicians, and producers on their blossoming projects?

Susie Seiter: Yes! Be bold. I see people who are so afraid to take risks and they’re so young! I actually didn’t get into this until I was 28, so I was already a teacher, and had a very steady job. Now, I’m not saying quit your job or anything, but if you have a passion to do something and you have a dream, and you’re around 28, why would you ever give up on that dream?

Julius: Could you elaborate on this?

Susie Seiter. I was perfectly willing to make less money, indeed considerably less money, for several years. I took a very large lifestyle change, where I moved from a very nice New York apartment to a very teeny studio apartment that was infested with roaches, and that was because this was what I really wanted to do! And now I live in a huge, four bedroom house! (laughs) But, people are too afraid to take risks for their dreams. This path was definitely not practical, but I feel like I have no regrets because I risked everything, and I knew I’d be fine. If I had to live in my car, I’d live in my car to do this for a living. I think you need to be bold, and have that drive if you really want to do this. I almost don’t take people too seriously when they say, “oh, that seems really hard” or “that’s scary or dangerous,” and I go, “Of course it’s scary, but you’ll be fine.” You can easily live on ramen noodles and pasta and I did! 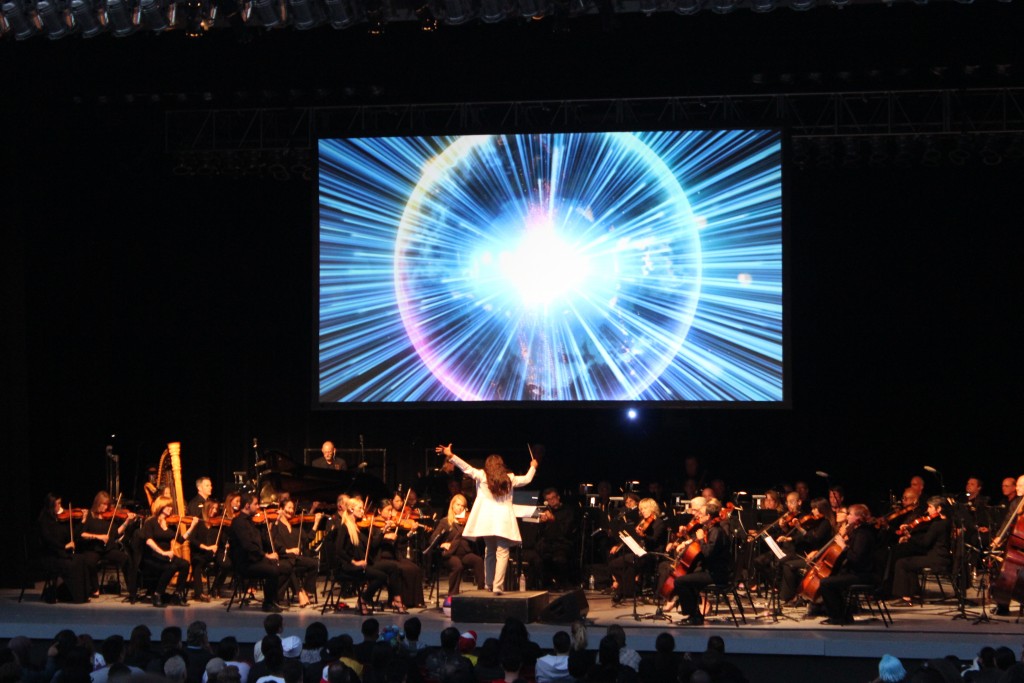 Julius: Any parting words for fans of Pokémon and game music/concerts?

Susie Seiter: I just want to express my appreciation for the fans, because they have been so sweet to us and so receptive, and are such enthusiastic audience members, so I just want to say thank you!

Julius: Thank you so much! Looking forward to seeing you onstage tonight!

Susie Seiter: Thank you very much!

For more information and tickets for Pokémon: Symphonic Evolutions, check out their official site, Twitter, and Facebook.

Julius Acero I recently graduated with a BA in Cinema & Media Arts from Biola University in LA, and am currently attempting to break into the film and television industries. I grew up listening to and learning from classical music and famous film scores, and absolutely fell in love with the orchestra at a young age. When I was 10, I began playing Nintendo games and became enamored with the music from Super Smash Bros., The Legend of Zelda, and the Mario series, just to name a few. Now, I continue to follow scores and composers, both eastern and western, and am continually surprised by the power and emotions behind their works. Above all, I am blessed to be part of such a creative community, and hope to further hone my own skills through this wonderful art form!