Classic. Timeless. Iconic. These are only some of the many descriptions one can attach to Capcom’s Street Fighter II, a fighting game which hardly requires an introduction. It was the title which pioneered its genre and spawned an immensely successful franchise that’s still going strong 25 years later. Even now with the upcoming release of Street Fighter V, it is still Street Fighter II which is the most fondly remembered and played entry in the series. There’s really nothing more I can say about the game itself which hasn’t been said already.

Alongside its innovative gameplay, Street Fighter II and its later expansions contained high quality soundtracks which made extensive use of Capcom CPS-1 and CPS-2 arcade sound systems. Yoko Shimomura’s original score was highly acclaimed by players for its varied themes across the game’s diverse cast of fighters, while Isao Abe and Syun Nishigaki contributed additional tracks. With high production values and memorable themes, SFII’s score was nothing short of pure excellence. Today it is regarded as one of the best VGM soundtracks in the industry and has spawned hundreds of fan covers and remixes.

The original score itself unfortunately never received an ideal soundtrack release despite its esteemed status. Previous releases suffered from poor sourcing, tinny sound, and lack of completeness. Fortunately, music label Brave Wave has taken upon itself to right that wrong with Street Fighter II The Definitive Soundtrack. Released on vinyl, CD, and digital download; this album collects the entire soundtracks to Street Fighter II and Super Street Fighter II Turbo mastered directly from the CPS-1 and CPS-2 arcade sound source. Most notably, Yoko Shimomura was directly involved herself with the remaster and it was handled with the utmost care by Brave Wave’s audio engineers. How successful were their attempts? In short, this is the best Street Fighter II has ever sounded and proves one of the strongest VGM releases of the year.

The CD release of Street Fighter II The Definitive Edition is divided into three discs, the first of which contains the full score to the game’s original version, The World Warrior. The opening tracks of “Title Screen,” “Character Select,” and “Versus Screen” quickly establish the nostalgia of walking into a 1990s arcade. Though brief, they serve as a good indication of what to expect from this newly created remaster. The sounds of the CPS-1 arcade board are on full display here, but the real attraction is of course the themes for the game’s over dozen fighters. Needless to say, seeing these tracks presented in the format they were originally intended is akin to truly hearing them for the very first time.

“Ryu’s Theme” shines truer than ever now thanks to the substantial upgrade in sound quality. The Japanese elements which represent the franchise’s iconic character can now be heard in their full glory while proud and heroic synths carry the theme through. Almost like an Americanized variation of the same piece, “Ken’s Theme” plays heavily into elements of rock while the melody itself is among the most memorable in the series. Considering the shared in-game backstory between the two characters, these similarities (and cultural differences) between their respective themes are probably intentional. Street Fighter II’s most recognizable track, however, is perhaps “Guile’s Theme.” Propelled into Internet fame due to the sheer flexibility of the track’s composition, “Guile’s Theme” has served as the background music for hundreds of YouTube videos and has been remixed by many independent artists. Thanks to this release, it can finally be heard the way it was meant to sound.

Shimomura continues to experiment with ethnic sound and the results are an incredibly rich and varied soundscape. “Chun-Li’s Theme” and “E. Honda’s Theme,” Chinese and Japanese respectively, both incorporate Asiatic instrument samples to their upbeat melodies while “Dhalsim’s Theme” relies on the Indian sitar. “Blanka’s Theme” combines jungle percussion and a tribal dance-like bout. More impressive though is “Vega’s Theme,” a tango that moves at a frenetic pace with heavy Spanish instrumentation. All of these tracks make excellent use of the CPS-1 board and their remasters only make them sound all the more stunning. 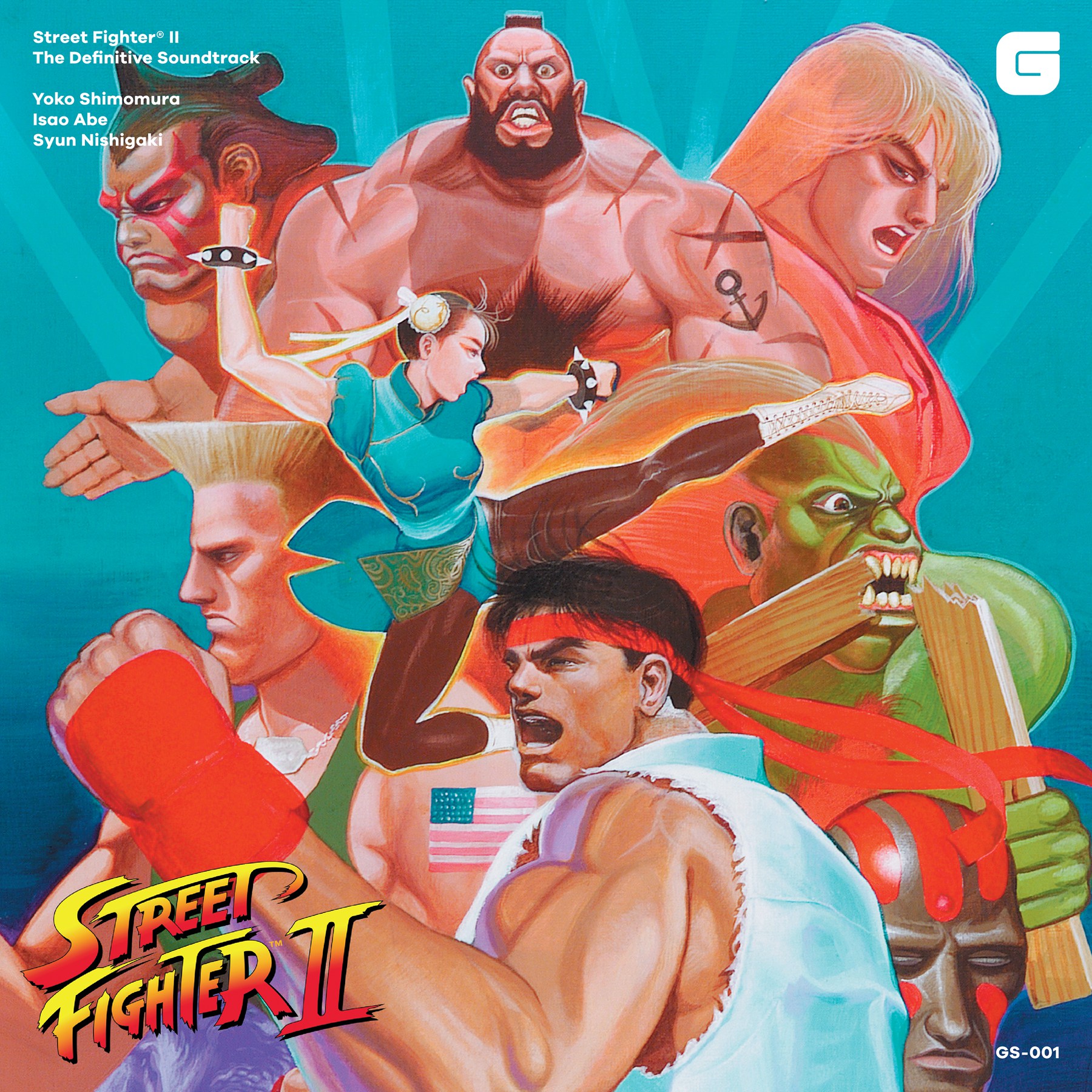 Some characters, however, are less ethnic in their composition and feel more personality-driven. The burly Russian fighter Zangief is given a low-octave melody with booming presence that is greatly enhanced by its syncopated beats. Boxer Balrog, on the other hand, has a funky disco-tinged urban theme which would not feel out of place had it been in Streets of Rage (is it any coincidence that both titles came out in the same year?). For big baddie M. Bison, Shimomura provides a menacing, brooding track that makes effective use of ominous bells and foreboding synths. Composer Isao Abe’s sole character theme contribution is that for Sagat. In a similar vein to M. Bison, it’s another impending track that implies great power and force.

The rest of the first disc consists of the various “Critical” and “Ending” themes for each fighter. The former are merely quicker variations of each fighter’s theme used when the in-game timer reaches its final seconds, while the latter are used during their respective victory cutscenes. Some of these ending themes are upbeat, some are bittersweet, and some provide foreboding of another fight ahead. While not containing the same amount of compositional depth as the main character themes, they provide sufficient closure to each fighter’s story and are generally well done. In particular, “Staff Roll” has Shimomura combining elements of all her previously established themes into one impressive finale.

The second disc features the soundtrack to the game’s expansion Super Street Fighter II Turbo, which itself contains largely the same musical material as The World Warrior apart from five new character themes. The most notable difference, however, is that the entire soundtrack was upgraded to Capcom’s CPS-2 board which substantially modified the original sound. Many listeners will likely have their own opinions on which board is “better,” but it was a great move on Brave Wave’s part to include both versions. In my own opinion, the CPS-2 tops the older version with its deeper sound, better resonance, and higher quality instrument samples. As for the new themes exclusive to Turbo, they do not disappoint and are right in line with the excellent tracks by Yoko Shimomura. 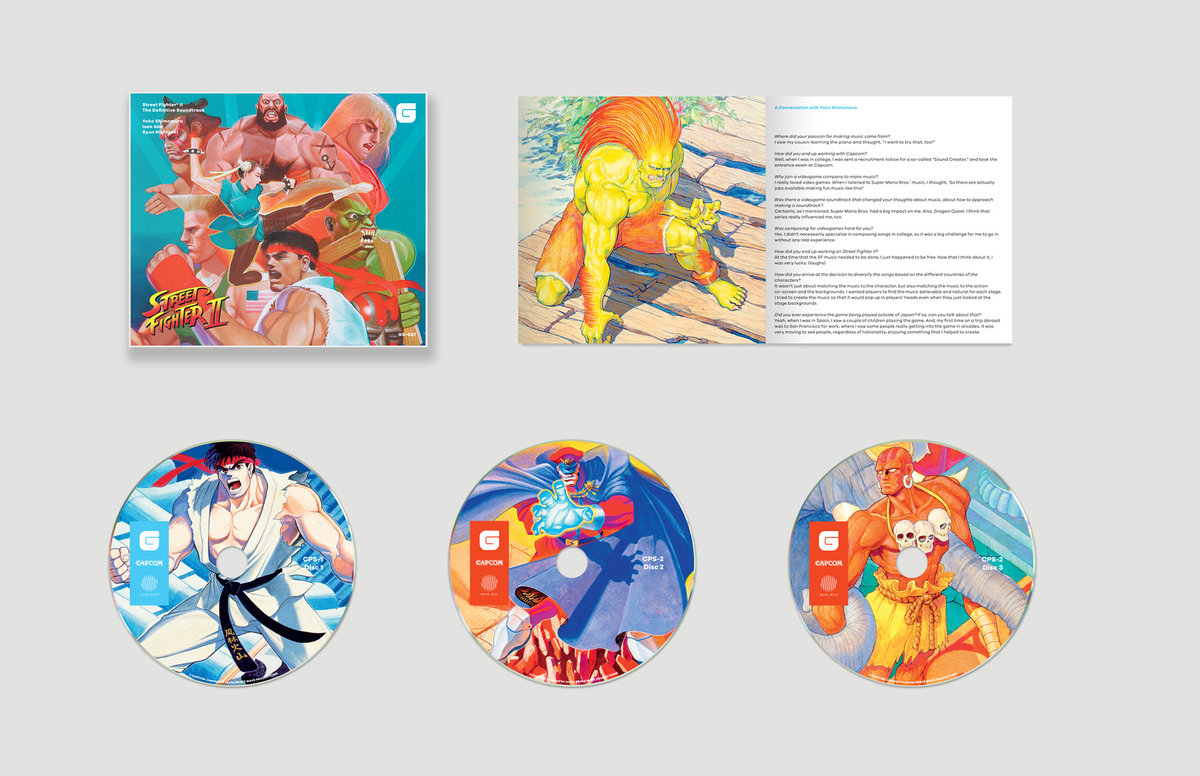 Syun Nishigaki’s “Cammy’s Theme” is a clever mix of jazzy piano bars and electric guitar riffs, while Bruce Lee lookalike Fei Long is a given a similar hard rock piece. Composed by Isao Abe, “Dee Jay’s Theme” is a techno-based tango and “T. Hawk’s Theme” combines Eastern and Western sensibilities into a heroic display worthy of the Native American fighter. In addition to these four characters in Turbo, demon fighter Akuma was an exclusive hidden final boss. Also composed by Nishigaki, his theme is a breathtaking rock piece with Eastern elements that makes efficient use of the CPS-2’s technology. Besides these pieces and some new ending themes for each respective character, the tracklist is largely the same as what was heard previously on disc one.

The third and final disc consists of “Critical” themes from Turbo, a staff roll, various jingles, miscellaneous tracks, and sound effects. Substantially shorter and less developed than the previous two discs, this portion of the album merely exists for completion’s sake. While it doesn’t necessarily make for easy or casual listening, it serves its job in completing the package and finishes everything on a satisfying level.

Street Fighter II The Definitive Soundtrack is exactly what its name suggests. Containing every single fighter’s theme in crisp quality right from the arcade source, options between both sound boards, and tons of extra content; this is exactly what the fans have been waiting for. Said to be the first in Brave Wave’s “Generation Series” of album releases, one can only hope that further classic VGM revivals of this caliber are on the horizon. On its own though, Street Fighter II The Definitive Soundtrack has set the standard for what a retro VGM soundtrack release should be in this day and age. The difference between this and previous releases is simply night and day. All the effort on Brave Wave’s part was most assuredly well worth it and it gets my full recommendation.