Shunsuke Tsuchiya and Mariam Abounnasr are members of Yasunori Mitsuda’s Procyon Studio and have contributed to a variety of anime and game soundtracks during their time at the studio, including Another Eden, the Luminous Arc series, and Stella Glow.

In this interview, Shunsuke Tsuchiya and Mariam Abounnasr discuss their work on the Square Enix published title, ONINAKI.

Don: Tsuchiya-san and Abounnasr-san, thank you for discussing your recent work, Oninaki, with us today. Before getting started on the main focus of the interview, would you reflect on some of your other projects you have completed in the past year or so, such as Revolve8 or the NieR/Chrono related orchestral arrange albums? 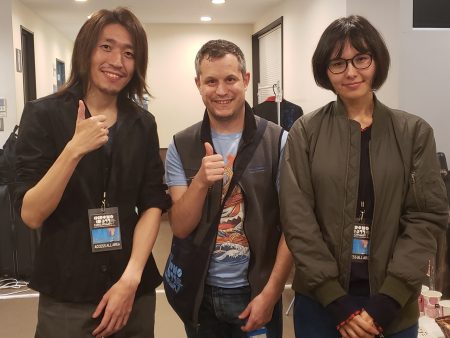 Abounnasr: It’s always a pleasure, thank you for having us! Yes, our recent works include Revolve8 compositions and some arrangements for the Chrono Cross Live Tour.   I’ve personally had the privilege to orchestrate for the Kingdom Hearts Orchestra – World of Tres –, NieR Orchestra, and Chrono Orchestra albums. (Other works include: Inazuma Eleven: Ares no Tenbin & Orion no Kokuin and Xenogears 20th Anniversary Concert.)

Tsuchiya: Thank you for hosting the interview! In the case of Revolve8, in order to make music that fit its unconventional world filled with characters from different fairy tales around the world, we used folk instruments from each of the featured countries. Because of this, the Revolve8 soundtrack has a somewhat different sound when compared to our other works.

Don: Tsuchiya-san, you were responsible for the main theme, “ONINAKI.” Abounnasr-san, in the liner notes for the soundtrack, you mention that “Blood Flow” was written as an alternative main theme to the game. Could you discuss your approach to these pieces and what were the factors that resulted in the final instrumentation and overall mood of the song?

Tsuchiya: Reincarnation is an important keyword and theme in ONINAKI. To convey this theme within the game’s music, not only in the main theme but in other tracks as well, there are distinct motifs that change forms between thematically related tracks.

Abounnasr: “ONINAKI” generally portrays the surface of the ONINAKI world, reflecting more on people’s emotions and lifestyle with ethnic instrumentation and emotional melodic line, whereas “Blood Flow” portrays the hidden truth behind it. I guess the relationship between the two pieces can be compared to the Star Wars main theme and Darth Vader’s theme, where both represent the light and darkness of the Star Wars world.

Translator’s Note: The original Japanese term, 輪廻転生 (rinne tensei), could also be translated as transmigration, referring not only to reincarnation itself but also to the journey after death and before life. Alternatively, it could be translated as Samsara, which might be simplified as the state of wandering aimlessly through a world of cyclic reincarnation. 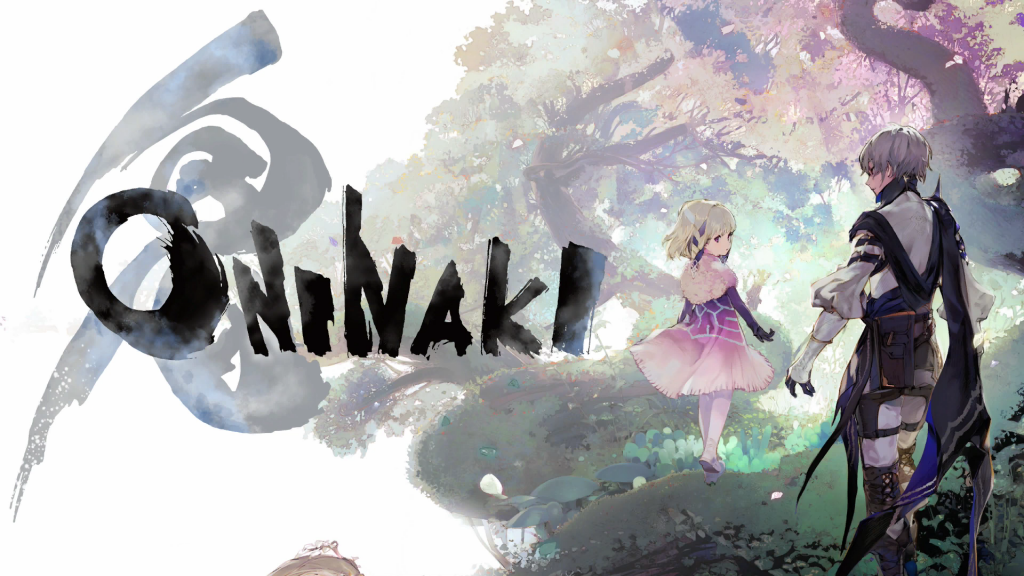 Don: Abounnasr-san, you adapt the main theme a few times on the soundtrack. Could you discuss some examples of how you arranged the main theme to get your desired effect tonally?

Abounnasr:  I think the most obvious ones are “Sadness” and “Kagachi.” I’ve also sneaked it in other battle pieces like “Omukust.” I have also sneaked the theme of “Blood Flow” in “Shadow Hall” and “Sanctum (Jingle).” The motif of “ONINAKI” didn’t need to be hidden as much as “Blood Flow”, simply because “Blood Flow” is a representation of the Oni, which is heard in the latter part of the game…Thus hearing the “Blood Flow” motif at an early stage would spoil the plot.

Tsuchiya: Beforehand, Mariam and I discussed the direction we were going to take with the game’s music and what kind of instruments we would need to use. Because of that, I left the actual arrangement up to her. Mariam’s truly amazing arrangements are always filled with ideas I never think of. I remember looking forward to the music demos she put together.

Don: Another major aspect of the soundtrack are the various character themes, both for protagonists and antagonists, present on the album. Tsuchiya-san, could you discuss your approach to “Linne” and “Night Devil” and how you feel the music represents the characters? Abounnasr-san, you were responsible for “Kagachi” and “Sara.” Likewise, could you discuss your approach to these two themes and what led to the various instrument choices, melody, and tone of the themes? Was it always planned that both of you would write the opposing themes to each other?

Tsuchiya: When I first read about Linne’s character in ONINAKI’s scenario, if I had to choose one word to describe the music that came to mind, it would be “sad”. But, after game development had progressed quite a bit, as I saw her travel alongside Kagachi my impression of her and her story gradually became warmer. In the end, I combined these two emotions together into one piece.

I was asked to make “The Night Devil” a track that could be used both in cutscenes and in battles. I kept that in mind while making the track. This character is essential to the story, so this theme can be found in the form of a motif in other tracks as well. When this motif plays, it hints at the existence of The Night Devil.

Abounnasr: We didn’t plan who will write what piece, but we knew that “Linne” was linked with “Sara” (”Kagachi” and “The Night Devil” accordingly) from the set list that we were given.  We usually tend to split pieces literally in half, and then negotiate/exchange pieces when necessary… For ONINAKI, we tried to balance it according to the required mood of the music, so we both have a chance to write for a ballad as well as something aggressive. As a result, the music came out interestingly I guess..!  The team wanted “Kagachi” as an arrangement of “ONINAKI,” so I aimed to balance out the rather emotional motif with Kagachi’s cool and detached character.  “Sara” was a challenge that ended up failing because I was initially trying to arrange the motif of “Linne” to create a musical connection, but sadly the team and I agreed that it wasn’t going to work. So, I instead sneaked the motif of “Blood Flow”.

Don: The area themes in the game are rather short and only utilized in the game when first entering an area or discovering an important landmark within. What were some of the challenges both of you faced in crafting these shorter themes for various locations, which is quite untraditional for a Japanese-made action RPG, where music is typically present at all times?

Tsuchiya: From the beginning, Tokyo RPG Factory wanted the area themes to be this way. This approach is rare in JRPGs, so even though the musical direction had already been decided, I had a lot of difficulty composing the first area theme.

Abounnasr: I needed to re-think the functionality of music for area themes, because typical JRPG area music wasn’t going to work here… The music needed to give a clear image of the kind of area that players are entering, and I came to realize that a strong melody line was not necessary, so timbre and texture became the prime factor of creating area themes. I got the idea from hearing the BGM of Discovery Channel programmes!

Don: In addition, the area themes are generally more atmospheric and more similar in approach to a more Western developed RPG. What led to this decision and could you talk about your approach to some of your contributions?

Tsuchiya: You’re exactly right. We aimed for an approach similar to that taken in many Western RPGs. The reason for this was that Tokyo RPG Factory wanted to make a game that focused on the impactful scenes, rather than one that always had music playing. In the end, I think this decision played a big role in conveying the world of ONINAKI

Abounnasr: As mentioned earlier, I watched a few Discovery Channel programmes to see what the music actually does and realized how musical textures can stand strongly as melodies. Thankfully we were given pictures and video clips of each area with detailed descriptions, so that helped to musically imagine the potential sounds that would suit each area. For example, for “Nataya Valley”, I had the impression of a dried, safari park-like weather condition, going well with a dried and strong sounding percussion and zither. Personally, writing music for the areas was the most fun part..!

Don: Tsuchiya-san, for some of your area themes, such as “Mt. Teora” and “Mesid Woods,” the opening melody is the same. Could you describe their relationship to each other and are there any other examples of this similar utilization of other motifs across area themes?

Tsuchiya: You have good ears! (laughs) Although these are two separate locations, they both feature a mountain range. So, I decided to use the same motif in each track. There are similar musical devices in other tracks, so it might be fun to listen and try to find them.

Abounnasr: Oh, I didn’t notice that! From my side I didn’t make any specific connection except for “Obbe Plains” and “Shadow Hall,” where there is a connection with “Blood Flow”.

Don: The last major area of the soundtrack is the various battle themes present in the game. Given the nature of the game, what led to a rock approach, influenced by Celtic instrumentation? Could you reflect on some of your contributions?

Tsuchiya: At the beginning, Tokyo RPG Factory wanted to express the world of ONINAKI through a distinct sounding wind instrument. Because of that, the game itself—including the first theme that I composed, “Reincarnation”—features not only the low whistle, but also the tin whistle, Irish flute and a number of other wind instruments. While these instruments are commonly used in Celtic music, I thought it would be interesting to combine them with rock. “Battle -Threat-” especially encapsulates this idea.

“Battle -Kushi-” and “Battle -Oni-” have a bit of a gothic metal component added to them. While trying to find the type of musical expression I wanted to use in these battle themes, I thought that gothic metal had a high affinity with ONINAKI’s outlook on life and death.

Abounnasr: “Battle -Fallen” was sort of my personal experiment in having an aggressive groove going on without making rock music. I was told this needed to sound specifically threatening and dark, and I thought I would achieve that using orchestral instruments. I also wanted to record an instrument called ‘hurdy gurdy’, also used in the area theme “The Lost Town” (we didn’t get to record the instrument sadly). From its dark and melancholic sound I thought it would suit well with the battle music.

As a secret boss theme, “Omukust” aimed for a positive and exciting drive. Perhaps not so much of Celtic influence, but rather a mixture of orchestral and rock… I wonder how many people actually got to hear it..!

Don: Thank you once again for speaking with us today Tsuchiya-san and Abounnasr-san. Is there anything you would like to tell the fans of your music and what can we expect from both of you in the future?

Abounnasr: Thank you for having us! Well there are a few new exciting projects lined up at the moment, both composing and arranging. Sadly, I can’t release any information yet but I’m sure some of these titles would excite people (!)… so stay tuned!

Tsuchiya: Thank you very much for reading until the end of the interview. Both of us spent a long time on ONINAKI, so we were really happy when we received an award in VGMO’s Annual Game Music Awards 2019. I’d personally like to continue taking on new challenges, so please look forward to my future projects!