Masayoshi Soken has been the subject of many accolades for his soundtracks for the MMORPG Final Fantasy XIV: A Realm Reborn and its expansion Heavensward. In Final Fantasy XIV: Stormblood, Soken continued his role as main composer and sound director, crafting an equally impressive soundtrack to tell of the struggles of the Domans and Ala Mhigans against the might of the Garlean Empire.

In our third interview with Masayoshi Soken, he reflects on the various live concert events for the series, discusses various aspects of the music of Stormblood, from the general approach to more specific details regarding certain areas and battles, and offers a glimpse of things to come in the upcoming Final Fantasy XIV: Shadowbringers expansion.

Editor’s Note: For those who may not have completed Final Fantasy XIV: Stormblood, the interview does contain slight story spoilers in regards to the question around Patch 4.3 Under the Moonlight.

VGMO: Masayoshi Soken-san, thank you once again for your interview with our site. To kick things off, can you reflect on the past couple of years, in terms of how much more popular Final Fantasy XIV music has become, especially considering the recent dedicated orchestral and Primals concerts being held?

Masayoshi Soken: The work I do in developing patch updates and expansion packs completely overlapped with these music events, so as you can imagine I was extremely busy. However, through the orchestra and THE PRIMALS concerts, I was able to interact with FINAL FANTASY XIV players around the world—I feel like the time spent doing these special events was very worthwhile. I’m always truly thankful that players around the world take interest in the music of FINAL FANTASY XIV.

VGMO: The story of Stormblood takes place over two distinct areas. What challenges did you face when trying to compose music for two different regions with their own unique identities, but also a commonality in facing the same type of conflict?

Masayoshi Soken: One of the biggest challenges in Stormblood was expressing a Japanese feel in the music and sound. Adding a traditional Japanese instrument into the song may help give it that Japanese sound in that instance, but FINAL FANTASY XIV has so many songs that we’ve been registered in the Guinness Book of World Records. If we simply add traditional Japanese instruments without much thought, we won’t be able to create music that supports the multitude of gameplay content within the game, all of which are so varied.

Furthermore, while there are many different types of traditional Japanese instruments, there are only about three types that can play a melodic scale. I needed to compose many songs which included this essence: it was definitely tough. We did explore many different means and methods, such as utilizing unusual scales or Japanese vocals, which allowed for Stormblood to have such originality in its musical presentation.

VGMO: Of all the area themes in Stormblood, the music for Azim Steppe is the first one to feature vocals. What led to this decision to include this unique aspect to the Au Ra region? Additionally, we’ve seen a lot of vocals in previews for new Shadowbringers areas—is this going to be a new theme we will see in a lot of these tracks?

Masayoshi Soken: As we considered how to bring to life the vast plains that sprawl across the Azim Steppe, we received a list of requests from the scenario team—one of the keywords in this request was “some female artist” (laughs). When I saw that phrase, the idea to express the field music through a chorus came to mind right away, and it evolved into what it is now.

I didn’t focus on a specific theme for the Shadowbringers field music. Rather, as I worked on the field music for areas that are connected to the main scenario for Shadowbringers, it ended up that a number of songs featured vocals—that’s really all it was. 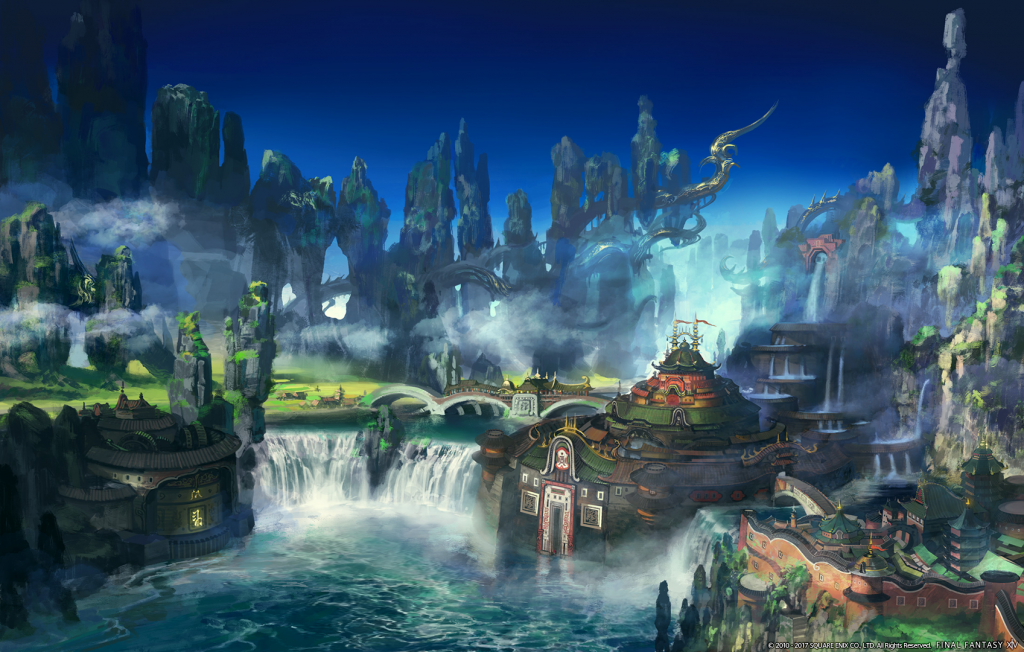 VGMO: Of all the major conflicts in the entirety of Stormblood, the major battle in patch 4.3, Under the Moonlight is perhaps the most emotional. Could you talk about the inspiration behind the music in each phase of the battle (Nightbloom, Lunacy, Wayward Daughter)? Could you also reflect on why you think that “Wayward Daughter” was voted the best of all Final Fantasy XIV music in the Fan Favorite Music Poll, and how that makes you feel?

Masayoshi Soken: At the beginning of the battle, the national anthem is arranged in a way so that from the player’s perspective, it is the Ala Mhigo national anthem, but in the eyes of Yotsuyu, it is the imperial anthem that sings her domination over the region. As the player progresses through the fight, they will go through the add phase and the second half of the battle. Each of these have different songs, but these two phases feature tracks which were created using portions of the Yanxia and Doma themes. Yotsuyu’s true, inner emotions are paired with the melody of Yanxia, and the many emotions swirling around her are paired to the Doma theme. We took extra care to arrange the music so that it fit perfectly with the story content.

Regarding the results of the Fan Favorite Music Poll, “Wayward Daughter” is a song from the portion of the game that closes out the narrative of Stormblood, and the song is played during the climax of the storyline. FINAL FANTASY XIV has a wide variety of content, but these poll results reaffirmed just how much the story of the game emotionally affects the players.

VGMO: This expansion also saw a lot of music introduced from previous FINAL FANTASY titles, most notably in a number of the high-level raids with bosses such as Exdeath and Kefka. When arranging past music from the series, what type of approach to you typically follow when tackling these pieces, and what is the thought behind the approach?

Masayoshi Soken: My opinion is that arranged songs will never surpass the original. These original songs cannot be replaced—they are deeply embedded in the hearts of the players, tied closely with the gaming experience with a particular game. Arranged songs can act as a catalyst that can channel these ties, but this is only possible because the original songs exist. Hence, when making arrangements for past FINAL FANTASY songs, I pay very close attention during production to make sure that I am not meddling with the experiences which are dear to the players themselves.

Let’s say I want to make an arrangement using only the piano. I wouldn’t place it front and center at the beginning of the piece. First, I would arrange the original music that would evoke that past gameplay experience deep within the listener, recreating the music with modern resources. Then, when the score repeats, I would consider adding a bit of spice and create an arrangement like this. That is the way I would go about portraying these tracks.

VGMO: With Shadowbringers right around the corner, what have you planned for the music in this expansion? Will we perhaps hear motifs or references to existing music in the game, or can we expect something completely new in The First?

Masayoshi Soken: To create characteristic music for FINAL FANTASY XIV, I always work to change the overall atmosphere and feel of the music quite significantly with each expansion pack. I ensure instrument selection and the melodies match the story, background, and environment of each expansion. If we’re going to change things up, I feel it should be prominent rather than subtle, so that players can get a stronger sense that they’ve set foot in a new world.

Shadowbringers has two theme songs, and a lot of the musical pieces used in the expansion pull phrasing from these two songs. Why two theme songs? How are they incorporated? You will have to play the game to find out the answer to that!

VGMO: Thank you once again for your time. Is there anything you would like to say to your fans around the world?

Masayoshi Soken: Even though FINAL FANTASY XIV is an MMORPG, players around the world have shown great interest in the music and sounds of the game—we have received many comments from fans expressing their love of the FINAL FANTASY XIV sound. As the game’s sound director, I feel truly blessed to have this kind of reaction, and it gives our team great motivation to keep on creating.

Music that pull at the heartstrings of players around the world. Music that get people excited. Music that moves people. I plan to keep pursuing the creation of this kind of music that can help further paint the overall gameplay experience. I hope everyone continues to play more and more of what FINAL FANTASY XIV has to offer, and I would be even happier if you could turn up the volume a little higher than usual when playing!