The amount of things one can do at MAGFest is seemingly limitless; nevertheless the concerts tend to be its biggest draw. After all, what’s a music and gaming festival without a chiptune artist or band blasting us with loud videogame music?

The best advice I could give to anyone attending MAGFest is to let your curiosity get the best of you. If there’s a band playing that you’ve never heard of, you’d best attend their show, lest you miss out on a pleasant surprise. Not to mention, an immediate trip to their merch booth after their set. While I couldn’t possibly attend every single concert this year, I did experience a decent chunk of them; enough to present to you several bite-sized reviews of the acts I had the chance to dance, fist-pump and bang my head to.

Triforce Quartet consists of a traditional quartet featuring two violins, a viola and cello. The group opened up Friday night’s concerts with utmost style. They paid homage to their namesake with a Zelda medley that spanned everything from the NES original to Skyward Sword, but that wasn’t all. They also played music from Sonic the Hedgehog, Dragon Age: Inquisition, and performed a stupendous Final Fantasy medley consisting of boss themes from IV, VI, VII and VIII. The sheer technical demand in playing those dramatic Uematsu pieces was enough to make my mouth drop.

It’d be a strange MAGFest without one of the kings of nerdcore hip-hop representing, and Mega Ran put on a wonderful show with accompanying artists BitForce, K-Murdock and Storyville. Together they performed tunes like “The Ruler’s Back” (“Edgar and Sabin” from Final Fantasy VI), “Splash Woman” (Mega Man 9) and an obligatory freestyle. This freestyle would turn out to be the most meaningful one he’s ever done. In an emotional highlight of the festival, Mega Ran invited his girlfriend to the stage during his freestyle, went down on one knee, and proposed to her. Kudos to the man for being able to continue the show after pulling that off.

The LA-based On Being Human label themselves as an “adventure rock” band, providing a very heavy, synth-laden sound backed by some incredible vocals. This was readily apparent in their rendition of “Gotta Catch ‘Em All” from the Pokémon anime TV show, which was accompanied by several blow-up pokéballs being thrown into the crowd. The ball-throwing was a good bit of fun initially, but got old fast as I found it distracting. Nevertheless, the band pulled off a great show, playing a stand-out Goldeneye 007 medley, featuring some of composer Grant Kirkhope’s most metal-inspired tracks. 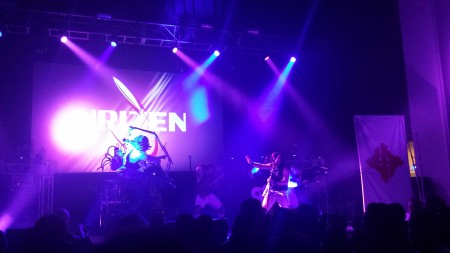 “Take DEVO, Rammstein, Dimmu Borgir, Type O Negative and a 1985 Nintendo. Mix them in a blender. Then blast them into outer space! Wow! Sounds like URIZEN.” That’s the band’s perfect summation of their sound, but it doesn’t fully describe their stage antics, which are a sight to behold. You can go into a URIZEN show and expect to see the nefarious mad scientist Dr. Fritz Von Schmekenhammer frequently appear on stage as he attempts to foil the band in a number of wacky ways. This includes hooking the band up to electrifying thinking caps, assaulting them in a mech suit, and pelting them with tennis balls in a cardboard tank. This is followed up by an encounter with a blow-up eye goo monster, which the band fends off with the help of an automatic toilet paper gun and a giant robot. All of this happens as they play some really heavy, synth-laden heavy metal. I was smiling the whole time.

Although I had constantly heard of the band at past MAGFests, I never found the time to witness Rare Candy perform live. I’m glad I finally did, because they are a very talented group notable for their use of two keyboardists. The band kicked things off with Ayako Mori’s classic BGM from Ghosts ‘n Goblins before exploring many stand-out Koji Kondo and Yasunori Mitsuda tracks. I never in my wildest dreams would have expected the words “this next one is from Xenogears” to come out of keyboardist Dominic Cerquetti‘s mouth. “Dark World” from The Legend of Zelda: A Link to the Past and “Undersea Palace” from Chrono Trigger were nice surprises that riled up show goers. The band wrapped things up with “Sub Castle BGM” from Super Mario World. This was followed by a brief rendition of “Castle & Fortress” from Yoshi’s Island, which I delightfully sashayed to in tandem with the rest of the band and the audience.

Professor Shyguy kicked off MAGFest 13’s “MAGprom,” where attendees were encouraged to dress in fancy clothing and bring their significant others to enjoy a “romantically” nerdy, tongue-in-cheek show. While I may have been decked out in a full suit and 8-bit tie for the occasion, I only had my Link-themed flask to keep me company. Admittedly, I wasn’t familiar with a majority of Shyguy’s set, which featured chiptune versions of some 80s tracks like “You Spin Me Round (Like a Record)” by Dead or Alive, but he had a great stage presence and rightfully played up the “prom” factor of the night.

The Protomen. Do they even need an introduction? The Mega Man-inspired rock opera was granted two sets on separate days at MAGFest this year, and they delivered  wholeheartedly in both. Their Friday MAGprom set was comprised of nothing but 80s covers taken primarily from their newly-released “The Cover Up” album. They kicked things off with Styx’s “Mr. Roboto,” and proceeded to rock everything from Huey Lewis and the News’ “Power of Love,” Kenny Loggins’ “Danger Zone” and even Bonnie Tyler’s “Total Eclipse of the Heart.” Towards the end of their set, they injected me with a googolplex of nostalgia by recreating Back to the Future’s “Enchantment Under the Sea Dance,” playing “Earth Angel” followed by an energetic version of  “Johnny B. Goode” sung by Turbo Lover.

The Protomen’s knack for the tongue-in-cheek was felt even at their Sunday show, which contained far more comedic elements than what I’m used to. This included a hilarious exchange that involved singer Raul Panther’s Mega Man persona “stabbing” Kilroy’s poncho-wearing Proto Man. “I just got stabbed by a goddamn keytar,” Kilroy remarked. “I’m going to go die now…happy!” To top things off, the band introduced a new track from the long-awaited “Act III,” which contained an onslaught of heavy guitar riffs.

For my first Saturday show, I was introduced to Dethlehem. The band hails from the biblical town of Ghorusalem (aka Pittsburgh, PA), bringing melodic fantasy death metal to the masses. They mix in original content with their covers of Metroid, Castlevania and Mega Man 2, all while rocking out in medieval armor. Their death metal growling and mosh-heavy audience may not be for everyone, but you can’t deny they’re an entertaining sight to behold. 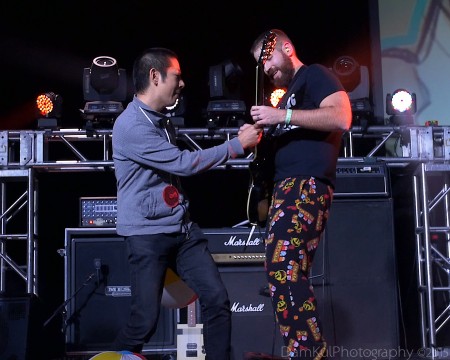 LONELYROLLINGSTARS debuted at last year’s MAGFest, and kicked things up in the humor department this year. This included a background display running psychedelic visuals, sensual Scott Bakula close-ups, Too Many Cooks references and obligatory Katamari Damacy artwork. In addition to tunes from Carnivortex like Mario Kart Double Dash’s “Rainbow Road” and their Quantum Leap/Back to the Future/Dr. Who medley, the band debuted several new tracks. These included pop culture hits like the Powerpuff Girls theme and more obscure tunes like the NES’ Treasure Master, Persona 4’s “Reach Out to the Truth” and an instrumental medley of all the vocal themes from Mystical Ninja Starring Goemon.

The band unfortunately experienced a few hiccups. To the consternation of some MAGFest event staff, they accidentally went over their allotted time (not an issue for me, personally) and bassist/Chapman Stick player Norg experienced a malfunction with his instrument. This forced him to play the band’s cover of Chris Huelsbeck’s Turrican 2 on his knees. Guitarists MegaBeardo and Ailsean, in a great show of class, followed suit, crouching down next to him.

What ultimately made the show for me was their finale, where they invited Katamari Damacy co-composer Yoshihito Yano onto the stage for “Lonely Rolling Star.” Yano proceeded to play the Katamari diddy on the keyboard, threw beach balls into the crowd and helped guitarist MegaBeardo with a finger-tapping solo. In other words, it was pure joy.

While not actually brothers (only bros), the <a href="http://superguitarbros.bandcamp.com/" tar