I recently attended Distant Worlds–Music from FINAL FANTASY in Durham, NC. Although Distant Worlds was launched over 10 years ago to celebrate the 20-year anniversary of the Final Fantasy franchise, this marked the first time Distant Worlds had performed in Durham–and it was an excellent way to begin. First off, conductor Arnie Roth assured the audience that the performance series is going strong and that he is in talks with Square Enix almost daily. Furthermore, the program not only featured new footage from the remake of Final Fantasy VII and an announcement that Yoko Shimomura–composer of the OST for Final Fantasy XV–will be touring with Distant Worlds in the future, but it was an all-around excellent concert as well. 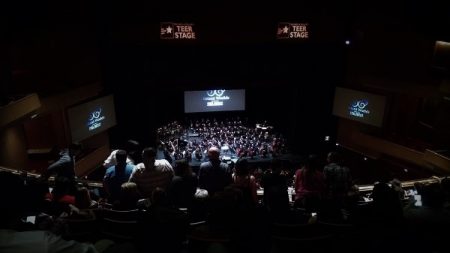 Unsurprisingly, the performance set list didn’t account for every Final Fantasy title. Even with 19 different pieces on the program, most games got one musical nod or less. The set was well-organized to introduce variety, both musically and chronologically, with a nice alternation between higher and lower energy pieces and between arrangements that were newer to the series or that were established staples.

It was terrific to hear the “Character Theme Medley” from Final Fantasy VI early on. This piece is one of the newer ones in the Distant Worlds series, and it highlighted several fantastic soloists in the orchestra. Like the actual soundtrack to Final Fantasy VI, this medley also showcased the range of diverse musical styles that Final Fantasy music has encompassed for more than 30 years, with the operatic theme of “Celes,” a more folk-style sound for “Terra,” and a wide mix of full and light orchestrations in other themes featured. Above all, this arrangement highlighted strong melodies written to complement interesting characters. As one of the only pieces performed from a game before Final Fantasy VII, it also felt like a solid bridge back to the roots of the series.

“Heavensward” from Final Fantasy XIV was another highlight of the program. Beginning with little more than solo harp and soprano, this piece featured by far the most delicate texture of the performance. It offered a refreshing contrast with more bombastic pieces like “Liberi Fatali” and “Apocalypsis Noctis,” drawing attention to how the Final Fantasy franchise excels both at epic moments and at more personal, character-focused stories. The vocal and instrumental soloists gave excellent performances, what’s more.

The second-half of the concert featured two especially strong performances back-to-back, when the orchestra performed “The Man with the Machine Gun” and “Fang’s Theme” consecutively. Both these pieces showed a lot of polish in terms of orchestra synchronicity and expression, and both cast the spotlight on a fantastic French horn section. “Fang’s Theme” was interesting since the ‘arrangement’ sounds so similar to the version actually featured in Final Fantasy XIII. Although this didn’t make it sound as new as some other music on the program, it exemplified the great work Masashi Hamauzu did on the soundtrack. I didn’t arrive at the concert particularly hoping to hear either this piece or “The Man with the Machine Gun,” but the live performances quickly pushed them high on my list of Distant Worlds favorites.

Fans of Distant Worlds might know that Final Fantasy composer Nobuo Uematsu originally stipulated that every concert in the series must feature at least two specific pieces: “In Zanarkand” and “One-Winged Angel.” I did not know this beforehand, and almost thought that the program would end without “One-Winged Angel” — which I’d specifically hoped to hear live. At the last hour, though, conductor Arnie Roth struck up the orchestra and choir to perform this piece as a sort of encore. Hearing it live was well worth the wait.

The quality of the music was very high all night, and the concert rarely had even minor blips in quality. One noticeable issue occurred during “In Zanarkand,” which as noted above is included at every Distant Worlds performance. This performance had some minor issues with the orchestra being off-time with the conductor and one another, as well as one glaring, early entrance on a prominent melody line. This seemed odd given how polished virtually every other piece of the program was. It was also challenging to hear the trumpets and trombones in several pieces, despite other brass sections like the French horns coming through clearly throughout the concert. This didn’t detract often, but it did dampen pieces like “Opening Bombing Mission” that featured the brass heavily.

The overall quality of the performance and the music itself easily outweighed any negative aspects to the night. It was invigorating to be part of such an enthusiastic audience, including members of several different generations now as well as some remarkable cosplay for Oerba Yun Fang, Aeris Gainsborough, Barret Wallace, Kefka Palazzo, Squall Leonheart, and many other characters. It was amazing to hear live renditions of so many years’ worth of Final Fantasy music, and the performance really manifested the staying power of the franchise and its music.

“The Prelude” (Final Fantasy and many others)

“Rose of May” (Final Fantasy IX)

“The Man with the Machine Gun” (Final Fantasy VIII) 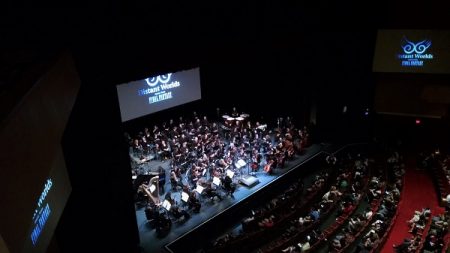