Soshi Hosoi’s FOUR SEASONS album is the latest album from his hosplug label. Featuring four tracks, each dedicated to a season and described as Ambient Landscape, does the album become too ambient or is it still enjoyable to listen to, regardless of mood?

The album starts with “Spring Forest,” an apt decision given it’s the start of nature’s regrowth. The track itself, although ambient in nature, does manage to provide a lot of sampling to create an intriguing and experimental listen. While not each section may be the most successful, the track is quite enjoyable on the whole. From the bird chirps to the electronic rhythms incorporated from time to time, the overall feel is definitely one of spring and one that reminds me, at times, of Hiroki Kikuta’s works. Moving into “Summer Rains,” the piece opens with a rainstorm and thunder. What’s interesting in the intro is how Hosoi adds a light industrial flair to the piece, making it sound as if the rain is being sampled into a choppy loop. The electronic components here definitely remind me of some of the sci-fi movies of the 80s. The ambient nature here is quite soothing and the melodic components incorporated are quite engaging and work with the overall flow of the piece.

“Piece of Fall” opens with more Kikuta-esque sounds accompanied by the sounds of various insects and what sounds like a walk through a forested path. It’s the piece that most sounds like nature, but also one that is the most experimental on the album. The electronic tones here aren’t the focus, but they do manage to lift up the track a bit more.  Lastly, “Snowscape” is definitely the warmest track on the album, full of piano, bells, and a variety of sound effects such as the crunch of feet walking through the snow. The crystalline sound of the synthesizer mixed with these effects and the piano make for an enticing listen and a fantastic way to close the album. Of the four seasons, this is definitely the piece that resonated with me the most.

Going into the album, I wasn’t sure what to expect, but I came out quite pleased with the overall listening experience. There are certainly a lot of experimental tunes out there, but the incorporation of electronic tones mixed with samples of nature makes for an intriguing experiment and one that I find quite successful. For fans of ambient landscape music, although with more of rhythmic twist, this one might be worth checking out. 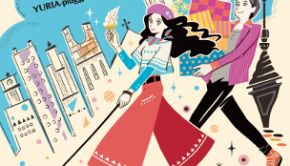