follow slowly is the fourth album from Naoyuki Sato composing under his NekomataMaster alias. As usual, it compiles full and extended versions of his latest tracks from various Bemani games. The album also contains two tracks from his collaboration with Tomoaki Hirono under the NekomataGekidan alias. The album marks a shift in Sato’s usual sound for the NekomataMaster alias, which usually consists of world and folk influences and mostly relaxing or mid-tempo tracks. follow slowly sees the incorporation of new instruments, heavier electronic influences, and a faster pace on average that makes for his most exciting and energetic album yet.

The album opens with one of three new tracks. Sato has a past of composing new relaxing intros, outros, and interludes for his albums; follow slowly is not an exception. Here, his progression into a new territory of sound is evident. “boundary line” opens the album with a few glitchy atmospheric effects of an ocean scene, and then a few light instruments come in. Rather than his usual spaced out trickling notes, Sato fills the space with an echoing electric guitar and a bit of build. His mix of acoustic and electronic elements is as interesting as ever, and the track is a wonderful taster of what is coming. Later the interlude “slowly” sees Sato using steady strings underneath sparse beats, a bit of dissonant piano, and a wash of effects. There’s a bit of tension in the track despite its apparent monotony, slowly pulling the listener into the track’s world. The closing “regression” also uses some of these ideas with a little bit more substance. These tracks are great (but short) new additions to the album.

Sato also includes a few vocal themes on the album, with some new vocalists making appearances. After the opening track is “chrono diver -fragment-“ featuring Aki Misawa. The track itself is quite good and sees Sato experimenting with some influences from other Bemani artists. His signature synths and melodic figures are there, but new are the overall drum’n’bass style and heavier electronic presence. Even Misawa’s vocals sound like they belong to a collaboration with another artist, slightly mimicking vocaloids. It’s a fairly epic track, with plenty of progression throughout its duration and a lot of energy. The other vocal tracks unfortunately aren’t quite as compelling, but they’re not particularly bad. Momoko Hayashi collaborates again with Sato on two tracks, “Flying soda” and “TWINKLING other side edition”. The former is a bright positive track while the latter (slightly re-arranged and now with new vocals) is another track in the Elebits pop vein. They’re nice enough, but they’re closer to Sato’s older works and feel less impressive on the album. Later, “Element of SPADA” with Haruka Shimotsuki uses a heavier electronic arrangement with thumping beats, but Shimotsuki’s higher pitched vocals don’t seem to mach the track too well. The track still shows an evolution of Sato’s sound, but the vocals keep the song from being a great one.

There are a few instrumental songs that are still cemented in the older NekomataMaster style. “Following Flow” begins slowly and quietly with soft piano and ocean sounds before steadily building into a surprisingly energetic track with a strong beat using the classic NekomataMaster sound set. After is “fallen leaves”, which is closer to instrumental material from Crevice with its use of retro synths. The copy and paste extensions are a bit more noticeable here, but it’s still a decent track. “Scars of FAUNA” is a standard world electronica track for the alias, but it has a great melody. Although these tracks are quite similar instrumentally to his previous work, they still fit with the new sound on the album thanks to their stronger beats and increased energy. The NekomataGekidan track “Esperanza” is rather interesting in that the melody draws its figures from tracks on previous albums, almost like a tribute to the Nekomata history. “Time again” is a more calming track that begins the closing of the album, and is closest to Sato’s older styles. It is perhaps a tad overlong, but the repetition almost befits the track and helps it serve as a closer.

The remaining tracks on the album push Sato out of his usual space. “Nekozamurai no Gyakushuu” now has an new intro featuring a few oriental instruments with cats meowing, eventually leading in to the energetic rock track. It almost sounds more like an Asaki track than one from Sato (Asaki actually plays guitar for some tracks on the album, but not here), but Sato’s signature melodic figures are present throughout along with some of his usual instruments are in the background. “envidia” under NekomataGekidan now starts with an extended Spanish guitar solo, and also gets some new solos later on as well. It turns out that the guitar as a spotlight instrument works wonderfully with Sato’s sound, fitting right in while changing things up a bit. “Avalon no Oka” brings in traditional Irish folk influence, and is rather fun and jiggish. The boss song “Symmetry” brings things back to a more serious, electronica focus. The sound progression is again quite good as the song moves on, and I like that Sato is still able to work in all of his staple instruments. Finally, there is the other boss song “Despair of ELFERIA” again bringing in that Irish influence, but this time also with an undercurrent of strings and heavy percussion that pushes the track forward. It’s a rousing piece that also borrows a bit from other Bemani artists, all to a great effect as Sato finally grows and experiments with his sound.

follow slowly is the NekomataMaster album I’ve been waiting for, taking Sato’s unique sounds and pushing them to more exciting territories. For the first time, the vocal tracks are actually the weaker offerings, while instrumental tracks are easily grabbing with their pulsating beats and more aggressive sound. None of this really overlaps with his NekomataMaster+ alias, but rather it takes the NekomataMaster sound through a natural evolution in its own direction. Some might say that Sato is moving away from what makes him truly unique with these tracks, but I was still able to find his presence in each track, and after three solid but similar albums, the change is quite welcome. 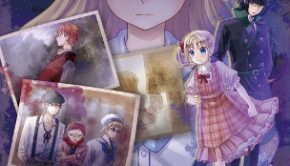