Last Saturday (August 29, 2015) I had the chance to see the world premiere of the Final Symphony II concert in Bonn, Germany. After the huge success of the first Final Symphony concert in 2013, Thomas Böcker, Jonne Valtonen, and Roger Wanamo from Spielemusikkonzerte (aka Merregnon Studios) took on the challenge of surpising the fans of the soundtracks of Final Fantasy once again.

Even before the concert officially launched in London and Osaka, the producers organized a very first performance in Bonn (probably due to the German background of some of the people involved) at the Beethovenhalle. Conducted by renowned Music Director and Chief Conductor of the Auckland Philharmonia Orchestra Eckehard Stier, the Beethoven Orchestra Bonn performed in front of two thausand young-ish music fans of both Final Fantasy / video game music and classical concert music. A couple of weeks before the concert took place, the organizers published a tracklist for the evening on their website. This was the same list as was printed in the official event program booklet:

Nobuo Uematsu
FINAL FANTASY VIII – Mono no aware
(The Oath | Don’t be Afraid | The Landing | Waltz for the Moon etc.)

The first thing that struck me when I was at the actual concert location was the enormous amount of young people hanging out in front of and inside the concert hall. I was pleased to see many video game related fan shirts, wickedly dyed hairstyles and people spending the idle time before the beginning playing on their 3DS. Keep in mind this is a very conservative location with pictures and statues of the old Ludwig van no-nonsense Beethoven all over the place. Usually people show up in suits and hats and exchange stories about their latest Range Rover aided fox hunt experiences. Stereotypes aside, I was overwhelmed by the cool audience and the professionalism of the organization. This concert was not treated as some weird sub-standard side gig but instead got the full concert treatment with program booklet and champagne bar. 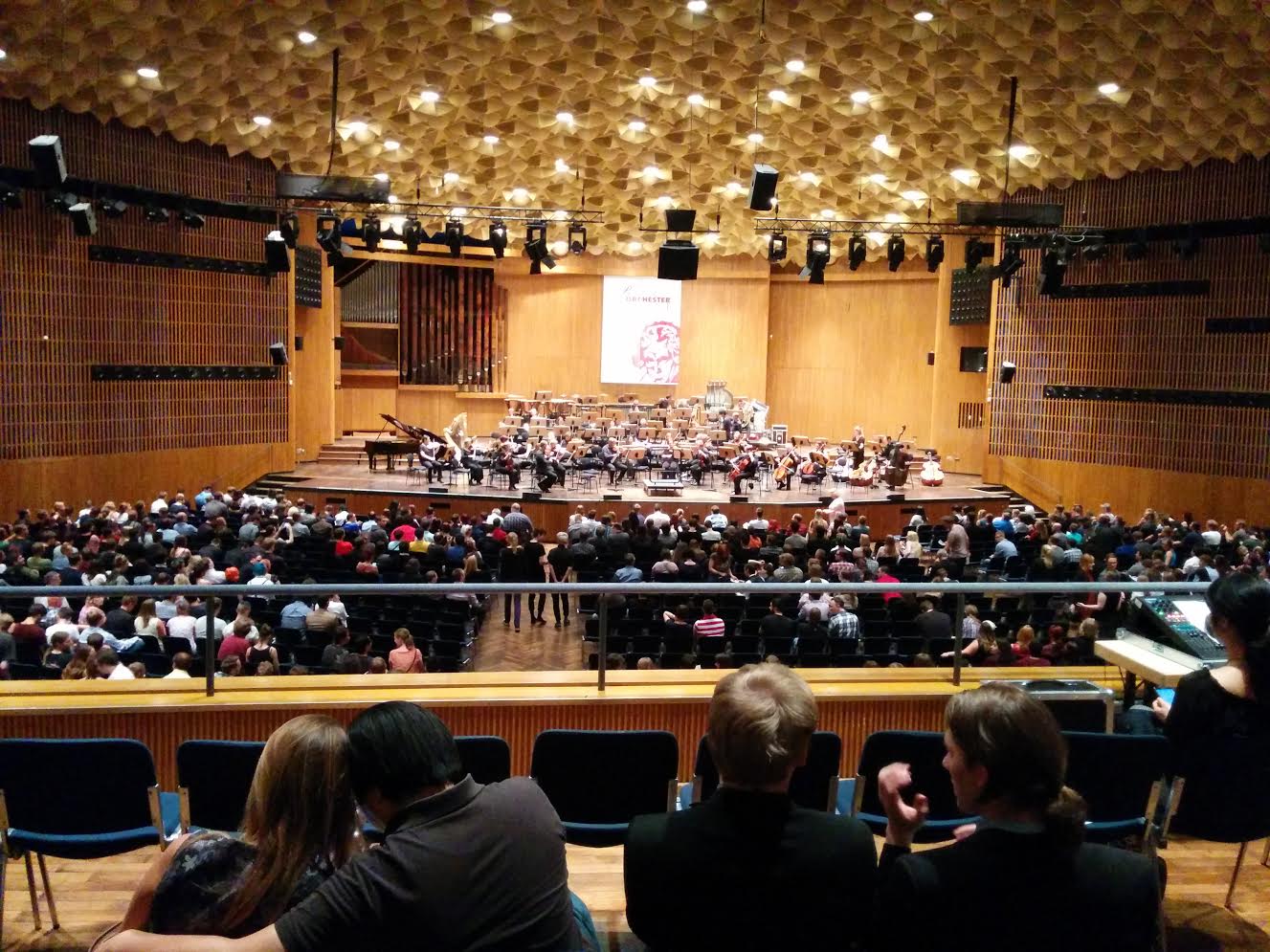 I knew some of the tracks that were announced beforehand, but was not well versed in the music of Final Fantasy and have not played any of the games (I am a VGM fan though and know every episode of The Legacy Music Hour by heart!). I therefore wanted to prepare my concert visit properly, given I usually enjoy concerts more when I know the works that are going to be played in advance. I created a playlist with the original tracks from the games in the order of the concert tracklist and listened to it often in the weeks and days before the concert.  The music that was eventually played was arranged in four groups, each containing material of at least four cues from one game. But instead of just playing orchestral versions of each cue (as I was expecting from my preparations) the material was completely rearranged. This was something that took me by surprise since I expected to hear the material that I had used to prepare for the evening just in orchestral versions. What we were presented with instead were four comprehensive movements or suites, one for each game (XIII, IX, VIII, V). Each suite contained various musical elements from the tracks that were posted previously and the quality of the arrangements was astonishing. The movements felt like one piece of music rather than an amalagamation of several cues.

This is something that was mentioned by the conductor Eckehard Stier during a Q&A session after the concert. He said that the people arranging the music, Jonne Valtonen and Roger Wanamo (and Masashi Hamauzu in the case of FFXIII) did outstanding work in creating suites of the highest standard from the source material. For this, they apparently played the games, watched play-through,s and dissected the original music to present the listeners with thoroughly researched and meticulously composed arrangements, which even captured to a degree the thematic progression of the stories presented in the respective games. (This is something that the avid Final Fantasy gamer might have picked up, but which I unfortunately didn’t due to the aforementioned reasons.) The choice of instruments was classically motivated using all the groups of the grand orchestra without any technical or electronical additions. There was also no big screen to distract the audience from what is going on musically, which is something that I highly appreciate.

When everybody had found their seats the moderator of the evening (Nino Kerl) announced that Masashi Hamauzu as well as a representative of Square Enix were present. They came to the stage and were greeted by the fans with a hearty applause. What follows is a short description of the four consecutive parts as well as a final comment on the concert.  The eerie quality of “Prelude to Final Fantasy XIII” was brilliantly rendered by the orchestra and the rest of this first suite presented the audience with this soundtrack’s more modern approach to game scoring with an emphasis on the general atmosphere created by the music and less on the thematic material. This being said, both “Vanille’s Theme” and “Nautilus” were clear landmarks of this arrangement.

The second suite with music from Final Fantasy IX was arranged as a complete piano concerto with Mischa Cheung giving a perfect performance both musically as well as concerning the choreography of his movements (if you’re into this sort of expressionistic exercise, that is). He captured the spirit of the music brilliantly and I was surprised several times by the choices the arrangers had made concerning which parts are going to be played by the piano. The fact that the concert featured music by Nobuo Uematsu from this point onwards was clearly audible due to the use of strong melodies and more thematic material.

After the break the concert featured music from Final Fantasy VIII including several occurrences of the famous “Waltz for the Moon” material intertwined into the fabric of the suite which was appreciated by the fans with frenetic applause. This suite also contained some very powerful moments with the whole orchestra going at it with an astounding force (the concert hall acoustics of the Beethovenhalle did their part to transport the music to the audience clearly and vigorously). The final suite with music from Final Fantasy V included the highly recognisable “Main Theme of Final Fantasy V” as well as the very emotional “Reina’s Theme” until it concluded the main part of the concert with a powerful apotheosis of pure Final Fantasy soundtrack goodness in “The Evil Lord X-Death”.

Of course several encores were played but I’m not going to spoil it for those who would like to go to one of the concerts in the UK and Japan. All I can say is that there might be an encounter between a very heavy brass instrument and a very contrasting little yellow creature. The audience loved every bit of the concert, which was apparent from the standing ovations after the finale and the fact that the entire crew of arrangers, the conductor, Mr. Cheung and Mr. Hamauzu returned to the stage and took bows four times and the crowd still wouldn’t stop clapping.

Musically speaking I was quite overwhelmed with what was presented and I even struggled to grasp some parts of it since it all happened so quickly and there was no chance to rewind and listen to certain parts again. But even given this possibility, if records are published of this work, I doubt that I will understand or even realize everything that is going on since the arrangements are so complex and so dense.

As already mentioned, the conductor was available for audience questions after the concert and one of the questions was about the main difference, in Stier’s opinion, between a concert of video game music and a concert of classical music. Stier, who has an astonishing repertoire of past performances, said that the main difference is in the acceptance of the audiences. Classical concert goers unfortunately wouldn’t realize the magnificence of the music that makes the Final Symphony series so successful and, due to stereotypes and preconceptions, would probably never see these two varieties of music as equals. To some degree, this would be true for the fans of the Final Symphony series as well, although he hopes to get at least some of them to attend a classical concert in the future. Further Stier explained that the musical sophistication of the arrangements was quite extraordinary and that the brass section especially was challenged to a more than usual degree by the parts they had to play for Final Symphony II.

In 2013 I did not see a live performance of the first iteration of the Final Symphony series but I listened to the recording many times since it was released. Judging from the limited contact of only one performance that I had had with the second iteration so far, I still dare to say that the second part does not have to hide behind the first one. Instead, it is a marvellous addition to the range of game music concerts that we fans are lucky enough to enjoy despite living outside of Japan. The Final Symphony series is a masterclass concert series, which easily lends itself to musical discussion and interpretation of the highest standards. The same can obviously be said about the arrangers, the conductor, the performers and, of course, the composers of this brilliant work of modern culture.