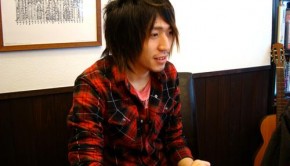 Shunsuke Tsuchiya is a young composer who has worked at Yasunori Mitsuda’s music production company Procyon Studio since 2008. During