The Soukai Buccaneers! Original Soundtrack is the latest work by ZIZZ Studio and features a variety of music for the pirate themed visual novel by artists like Yoh Ohyama and Yosuke Kurokawa as well as some newcomers like Lurtz69. How does the overall soundtrack turn out?

The album opens up with a vocal tune by Yoh Ohyama. Titled “Headway! Buccaneers,” it has a pop rock sound with a catchy melody and a decent vocal performance by Ayane as well. It starts off the album with a lot of energy and the guitar solo is quite enjoyable. There are two other vocal themes featured on the soundtrack. “The Ones Crossing the Sea,” by Toshimichi Isoe, is a rock tune and a very energetic at that. The vocal performance is serviceable, although it isn’t the best on the album; while entertaining, it doesn’t really stand out. The last tune, “Promise Me Tonight,” by Yoh Ohyama, is a ballad and closes off the soundtrack. It’s a very beautiful piano led tune and the vocal performance by Yuki Kanno is definitely the best on the album. In addition, there is a longer instrumental version of this tune that replaces the vocals with acoustic guitar and violin. Of the two versions, this one might appeal more to those who aren’t a fan of Japanese vocals.

The first instrumental tune on the album is also one that is absolutely one of the best offerings on the soundtrack. “Going to the Sea,” by Yosuke Kurokawa, is a vibrant tune that gives off this sense of adventure and has an incredible melody. There is a wonderful harmony between the instruments and the brass and electric guitar are the highlights of the tune and wonderfully complement the strings melody. “Calm – Laid-Back – Agricultural Village” is a very whimsical town theme. There is some nice instrumentation here and although it isn’t the most memorable tune, it definitely exudes a lot of atmosphere and charm. “Mysterious – Ruin – Cavern” is another tune worth mentioning. There is a darker atmosphere in the tune and that helps give it its mysterious nature, but I really enjoy the choral tones in the piece that accentuate the mood.

Tunes like “Sweet Mood” and “Sadness” provide some nice event music that features a pop flavor in the former and a more melancholic tone in the latter. These tunes are quite enjoyable and although not the most memorable tunes, provide entertaining listens. Another pleasant event tune is “Storm’s Harbinger.” It’s a beautiful orchestral tune with lots of atmosphere. Despite the ominous name, there is more of a sense of determined sound to it. However, not all the tunes on the album are successful. Tunes like “Lower Town Theme” and its reprise are quirky, but repetitive, while tunes like “Ship Deck March” are short, repetitive, and sound more like carnival music rather than a march.

There are also some more action-packed tracks. “Sea Storm,” by Lurtz69, is an orchestral rock tune that manages to provide a lot of energy with its atmospheric approach, but the lead guitar in the melody combined with the riffs makes for an entertaining listen. “Time to Fight” is another rock tune by Lurtz69 and it also brings a lot of energy. It isn’t too melodic in nature, focusing more on riffs and some electric guitar improvisation, but isn’t a terrible listen either. However, the best battle-like theme is certainly “Decisive Battle” by Yosuke Kurokawa. It is a fantastic orchestral rock piece that reminds me of Falcom JDK in many ways. The brass, strings, choir, and rock elements all mesh quite well together to create my favorite tune on the album.

Soukai Buccaneers! Original Soundtrack is a serviceable soundtrack to a visual novel. There are some tunes that definitely don’t hold up to a standalone listen, however, there are still plenty of tunes that can be enjoyed outside of the game. Fans of ZIZZ Studio might enjoy this soundtrack, although I wouldn’t rank it as one of their top efforts. 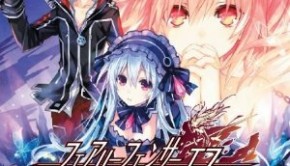