Eleven years since its launch, Square Enix’s MMORPG Final Fantasy XI continues to be enjoyed by many subscribers and has left quite a legacy. On November 11, 2011 (11.11.11), the franchise celebrated its anniversary with a special concert at Katsushika Symphony Hills’ Mozart Hall in Tokyo. It featured performances from the Tokyo Philharmonic Orchestra, pianist Kumi Tanioka, and vocalist Izumi Masuda of fan favourites spanning the entire MMORPG’s history. While tickets were only available through a lottery to active players, Square Enix released a special DVD so that a wider audience could enjoy the concert, which is the basis of this report. It features a complete recording of the concert, with 14 pieces and several MC segments, set to videos of the performance onstage and scenes from the game. The recording reveals the concert was well-produced, but does it offer enough to have widespread appeal?

During the opening minutes, the concert is introduced by Final Fantasy XI creator Hiromichi Tanaka. Soon enough, maestro Masahiko Enkoji comes to the stage and the Tokyo Philharmonic Orchestra break out with a performance of the “Vana’diel March”. Staying faithful to Mizuta’s original, the adaptation is highly metred and relies on conventional instrumentation, for example brass and snares. While hardly as dramatic as most Final Fantasy concert openers, it’s an appropriate way to commemorate an MMORPG — where everyday play features more continuity than change. The item develops into a medley, also featuring a bright trumpet-driven segue into “Unity”, an intimate violin-focused interlude based on “Wings of the Goddess”, and a grandiose finale featuring “Vana’diel March #4”. The DVD synchronises the audio recording with videos of the live orchestra performance and scenes revisiting the lands of Vana’diel. Combining familiar themes, robust performances, and sentimental videos, this item is bound to inspire plenty of nostalgia among Final Fantasy XI‘s audience and gets them in the mood to enjoy the rest of the concert.

Following the first of several MCs from the youthful female host, the orchestra performs “Ronfaure”. Most will recognise Shiro Hamaguchi’s arrangement from Tour de Japon and Distant Worlds, though its recycling here makes considerable sense. The arrangement sounds as elegant as ever and, whether the propulsive tutti or intimate soli, the Tokyo Philharmonic bring the most out of it. The video features projections of Vana’diel’s extensive woodlands, though the focus appropriately remains on the orchestra’s dignified performance. The concert retains the scenic focus with “Griffons Never Die”, while going back in time to the days of the Crystal War. Hayato Matsuo’s arrangement tends to be ambiguous in tonality and subtle in mood throughout. It certainly puts a more mature spin on the original and, in many ways, is reminiscent of his portrayals of the Nabreus Deadlands in Final Fantasy XII. Its pensive, beautiful tones are bound to inspire many feelings and memories among its listeners — each of whom will likely respond in a slightly different way based on their experiences through PlayOnline.

Many of the major highlights of this concert are the battle theme performances. Following an onstage appearance from proud series’ composer Naoshi Mizuta, the orchestra performs Rise of the Zilart‘s “Fighters of the Crystal” and Treasures of Aht Urhgan‘s “Ragnarok” in close succession. These tracks sound much rawer and darker than their synthesized originals, thanks to Yoshihisa Hirano’s orchestration and the Tokyo Philharmonic’s performance. “Fighters…” offers just enough contrast during its development to keep listeners immersed. The interlude one minute brings some relief to the ears, while simultaneously building tension. Prepared with a simultaneous crescendo and ritardando, the build-up that returns to the main figure ends up being one of the most dramatic and defining moments of the entire recording. The more modernist and abstract arrangement of “Ragnarok” is bound to divide listeners, and its short length is also a potential disappointment. The item nevertheless displays the might of the full orchestra and the videography displaying the formidable enemy is quite compelling. It certainly brings a bigger scope to the entire sequence.

In the concert’s biggest setpiece, Izumi Masuda subsequently performed the operatic pop song “Distant Worlds”. The song is one of Nobuo Uematsu’s best, interweaving the chilling motif of the franchise’s main theme “Memoro de la Stono” with original balladic material. Masuda’s classically-trained voice brings so much emotion to this song and it’s apparent that she rehearsed extensively with the orchestra beforehand. However, her pronunciation of the English lyrics can be jarring during the verse, especially compared with native speaker Susan Calloway. It’s also a little surprising that Square Enix presented this item at the middle rather than the end of the concert. Also awkwardly placed at the centre is the climactic final battle theme from the original game, “Awakening”, composed by Kumi Tanioka. Hayato Matsuo ensures the absence of the original’s chorus and tribal drums is no limitation by harnessing the full power of the orchestra. Whether the brooding tremolo strings at the opening, the tragic flute-based soli during the interludes, or the punchy brass roars at the climax, everything satisfies here. The videography of this segment is also astonishingly good, with the Shadow Lord depicted amidst intense gothic imagery.

Talking of Kumi Tanioka, in an inspired break from the orchestral performance, the artist came onstage to perform two fan favourites on a Steinway Grand. “Gustaberg” was similar in approach to her previous arrangements — a soft and heartfelt improvisation. However, her interpretation of Mizuta’s “The Sanctuary of Zi’Tah” grows considerably more elaborate during its five minute playtime, from its spiritual beginnings up to its passionate chordal climax. Tanioka also accompanies the orchestra in “Four Nations, One Sky”. This medley features each of the themes from the four main cities in suitably styled arrangements: an imposing bassoon-focused march for the Elvish San d’Oria, a sparkling melodious orchestration for the Human’s Bastok, a sprightly xylophone-peppered dance for the Tarutaru’s Windurst, and, finally, a stately string-based performance dedicated to Jeuno. While an enjoyable fan service, Sachiko Miyano’s arrangement takes few risks and the transitions between the briefly featured themes are nonexistent. Furthermore, in the only major balance issue of the concert, Tanioka is inaudible for large parts of the piece and was clearly dwarved by the full orchestra.

Following a further discussion between the host and Kumi Tanioka, Enkoji introduces the biggest surprise of the evening: “A New Horizon – Tavnazian Archipelago”, one of Mizuta’s most beautiful setting themes from the franchise. It doesn’t shift much from the Chains of Promathia original, but the full instruments and richer orchestration vastly enhance this piece from its MIDI rendering. It’s particularly wonderful to hear each of the Tokyo Philharmonic’s woodwinds shine during this performance. What follows is a further disappointment, a medley featuring the battle themes “Mercenaries’ Delight” and “Clash of Standards”. Following final battle themes like “Awakening” and “Ragnarok”, these pieces sound relatively ordinary. Expect yet more metred brass fanfares and stabbing string ostinati. It may have been appealing if presented earlier, but it seems like an afterthought late in the concert. Thankfully, the climax of the concert is anything but mild-mannered. Hirano’s orchestration of the Abyssea’s “Melodies Errant” is filled with momentous rhythm lines, dissonant chord ascensions, and vicious brass roars. But it’s unfortunate that the video work is relatively low-key and the arrangement essentially repeats itself half way through. 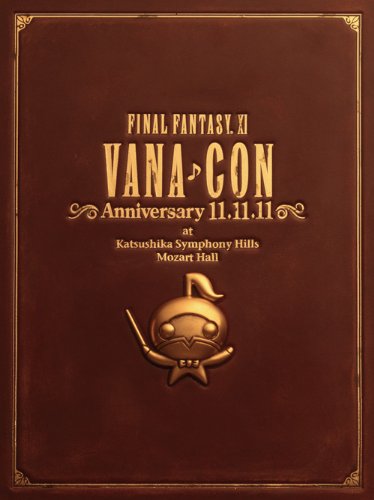 Following the performance, the orchestra bows to considerable applause. They perform an encore as the credits roll: a performance of the Final Fantasy series’ main theme, based on the arrangement featured on the Abyssea add-ons. The Tokyo Philharmonic’s soft performance is bound to inspire reflection on the concert that has passed and eleven years of Final Fantasy XI. But while it was impressive that Square Enix dedicated a 70 minute concert to a single game, one can’t help but feel there was room for even more, particularly from the MMORPG’s more recent expansions. Whether an impressionistic adaptation of “Faded Memories – Promyvion”, an exotic excursion with “Bustle of the Capital”, or a beautiful violin-based interlude through “Everlasting Bonds”, such additions could have made the concert much more interesting and wholesome. The omission of the game’s opening theme, likely due to lack of budget for a choir, is also unfortunate.

For the most part, the Final Fantasy XI Vana Con Anniversary concert was well-planned and executed. The item listings cover the full span of the franchise, ranging from fan favourites such as “Vana’diel March” to hidden gems such as “A New Horizon”. The arrangements all enhance the originals, whether the intimate setting themes, dissonant battle tracks, or militaristic marches, and a few are genuinely breathtaking. Material such as “Awakening” or “Procession of Heroes” would even be worthy of Distant Worlds repertoire. What’s more, the Tokyo Philharmonic and the soloists were clearly well-prepared and consistently bring the most out of the material. The well-choreographed videography are also a welcome supplement. All that said, the concert does not completely satisfy due to its slightly clumsy structure, conventional arrangements, and underwhelming climax. There is room for Square Enix to achieve even more and perhaps release an album of the results. That all said, this concert was enjoyed by fans of Final Fantasy XI‘s soundtrack and its DVD recording is worthy of a place on their collections.