On August 27, 2005, I was able to attend the Final Fantasy XI Summer Carnival 2005, which featured a live concert from The Star Onions, who I was able to meet, and also premiered a new composition by Uematsu, sung by Izumi Masuda. It also showed the semi-final and final rounds of Ballista Royale and featured a talk show with the creators of Final Fantasy XI and Hirokazu Hamamura (president of Famitsu publisher Enterbrain). I will not discuss these events here, however. Though I’m tired due to the trip, which took 12 hours each way, it was very exciting, so I’ll write about my experiences and any new information I found out here.

At the start of the carnival, Nobuo Uematsu appeared and introduced his new song for Final Fantasy XI, entitled “Distant Worlds.” Izumi Masuda sung it with her beautiful voice, which charmed the audience. They announced this song will be provided by iTunes Music Store in mid-September. In addition, Masuda’s new album, which will be released on October 21, features this song. Uematsu also confirmed that he plans to have a Final Fantasy concert in Japan next year, though no exact dates have been confirmed yet. 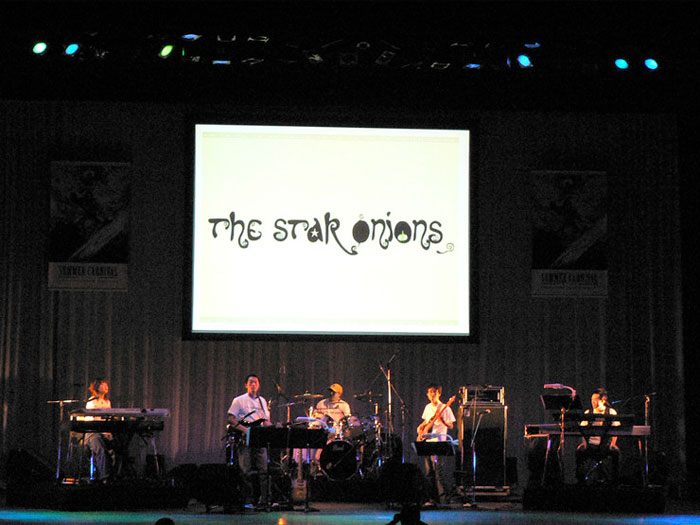 The main feature, The Star Onions live, was the last item on the program. The band members were the same as those confirmed here on The Star Onions site, with Naoshi Mizuta on bass, Kumi Tanioka on piano and synth, Tsuyoshi Sekito on guitar, Masato Kouda on synth, and Michael-Christopher Koji Fox on drums.

The first tune featured was “Yuhtunga Jungle,” and this was a new arrangement, not featured on theFinal Fantasy XI – Music from the Other Side of Vana’diel album. This took a rock approach and its heavy beats shook the bodies of the audience. Honestly, I can’t say I enjoyed the original track itself, but I liked this live version a lot. “Rolanberry Fields” from The Star Onions album was the next feature, and, though fairly similar, several changes were made. For example, the synthesizer was used in place of the soprano saxophone part.

“Mog House” from the album was then started, though, in the first minute, Koda’s synthesizer had some trouble (a power cut, perhaps). Tanioka took her master of ceremonies role very well in response to this accident, and, while staff were restoring it, Sekito also introduced himself. After this, the arrangement was finally featured and it sounded very similar to the original.

Self-introductions by other members soon followed. Koda talked about Monster Hunter 2, the next project he was involved in, and, though not a Square Enix game, Koda and Shiro Hamaguchi did collaborate for Monster Hunter. In other interesting news, Tanioka informed us that the Code Age Commanders Original Soundtrack will be released on October 19. After this, Arata Hanyuda from The Black Mages joined the band as a drummer, while Michael-Christopher Koji Fox performed on electric drums.

The last official track featured was “Awakening.” This version was very different and was arranged in a hard rock style, rather similar to that of The Black Mages’ arrangements. I preferred this version to the one featured on The Star Onions album and I want to listen to this again by the band or The Black Mages. After the audience demanded, the original band members performed an encore with “Selbina.” This was a new arrangement as well, and it was up-tempo like the game’s original track.

After the live concert, I met Tanioka by chance and received her autograph. We also talked a little bit and I told her that I was looking forward to listening to her compositions from Code Age Commanders. The event’s recordings will almost certainly be featured in the book and DVD “Famitsu DVD Book – Vana’diel Tsushin Summer Carnival 2005 Special Issue”, which will be published in November by Enterbrain.