I arrived at the concert late! As I made my way hurriedly through the great entrance of the Rosemont Theatre near Chicago, Illinois, I could hear the pulsing low strings that are the beginning of “Liberi Fatali”. The choir was building in intensity as I raced to get to my seat amongst darkness and people. As I came to my seat and settled they had just reached second line of text, and everything was growing in excitement. I then noticed that there were three screens above the chorus and orchestra portraying the opening scene of Final Fantasy VIII (To be technical here, it was the so-called “true opening” that seemed much more like a fan-made trailer). “Liberi Fatali” was everything that I would have expected it to be live. I wanted to sing along with the approximately forty person chorus, the Chicagoland Festival Chorus. They really did a good job on all of the arrangements that featured chorus.

After the opening number, our conductor for the evening, Arnie Roth, welcomed the audience and introduced great man who started it all, Nobuo Uematsu. He’s just like you see him on any video — very humble and energetic, continuously bowing, waving, and smiling. After that, Maestro Roth introduced the audience to two gentlemen from Square Enix. Afterwards, “To Zanarkand” played. It was absolutely wonderful. If memory serves me correctly, it was basically the same arrangement that was heard at Tour de Japon. “Aerith’s Theme” was very moving for all of the Aeris fans. Along with the music, we were given multiple images of the flower girl from the game. From the time that that Cloud fell into the church, to the moment right before Sephiroth came down upon her back with his Masamune, we were reminded of our holy flower girl without having to see the disturbing images of Sephiroth. They cut him out of the scenes and skipped over the parts involving him all together. It was really sad and the lady sitting next to me started crying — she was like 40 years old!

“Don’t Be Afraid” was one of my favorites. It started with a darkened stage, then, on the three screens, we see downtown Dollet, which is occupied by Squall, Seifer, Zell, and a dog. You all remember this part, right? Well, I didn’t know where they were going with this at first and I don’t think anybody else did either. Of course we all knew that “Don’t Be Afraid” is the battle music from eight, but what did this scene have to do with the battle? Well, the scene played out and then the player got control and started making his way to the satellite. It was at this moment, when Squall was crossing the bridge that the audience started chuckling, for now we understood the joke. Sure enough, when the screen faded in pure Final Fantasy battle transition, the orchestra started the music and we witnessed a Final Fantasy VIII battle as if we were just watching it on someone’s TV. There was a lot of laughing going on. It was clever. 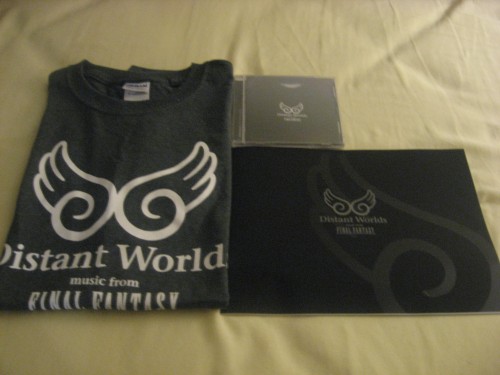 “Fisherman’s Horizon” was definitely a wonder to behold live. It was not too different from the arrangements that we’ve heard before, but there were still some minor differences. The horns section played the beginning chord of the piece for the choir, but it was still nice because it wasn’t just a single pitch. Also, I think the choir sang different vowels. Instead of oohs we got a lot of aahs — and aahs are more beautiful to me. I really enjoyed this one. Keeping with Final Fantasy VIII, The Final Fantasy I – III medley was pretty much the same arrangement on the 20020220 album. The footage was from the DS games I think, because I had never seen it before. “Final Fantasy” closed the first half of the concert. It was very moving, although nothing special was added.

As for the second half, a highlight was “Distant Worlds”. A local soprano sang this one. She did a good job, but she seemed kind of nervous. I really like this music thanks to forum member Andrew — he kind of analyzed it as we were listening to it and it made me appreciate it even more. The choir also did a good job. Though I haven’t played Final Fantasy XI, I have listened to the music and I like it a lot. A surprise favourite was “Swing de Chocobo”. I’ve never really liked this arrangement of the Chocobo theme… until NOW!!! Haha, I really liked hearing this one live. Special mention should also go to “Love Will Grow”. I must say I loved the pianist on this one — she was amazing.

Around the end of the show, they tried to trick us. After “Maria and Draco” was performed Arnie Roth said “Oh, I forgot to tell you that Maria and Draco was the last piece to be performed… but we’ll do one more”. Suddenly some random person from the audience screamed out “ONE WINGED ANGEL!!!!” and the audience cheered in approval of the outburst. Roth responds “But that’s so predictable… well, we have something equally as thrilling… a great arrangement of Terra’s theme”. Nobody really said anything, but I know that they were all thinking the same thing that I was. Deep down I knew that it wasn’t over. I mean, the choir was still on stage! Sure enough, they performed “One Winged Angel”, and it was fantastic. All in all, I really enjoyed the concert.