Yakuza 5 Featured Songs (or Ryu ga Gotoku 5: Yume, Kanaeshi Mono in Japan) is a digital album featuring vocal songs by GOSPELS OF JUDAS and Kiyosuke Himuro tied to Yakuza 5. Most were not featured in any shape on the original OSTs of the game, and here appear in full-length tracks, resulting in an album that feels more like a J-rock album than a typical Yakuza soundtrack.

The album begins with a full version of the new theme, “Bloody Moon”, performed by GOSPELS OF JUDAS. It’s a strong J-Rock track that interestingly has a very wispy, ethereal male vocalist on lead. It seems like an odd choice for the style of the track, but the vocal still carries an intensity that matches the rest of the band. The track has a good riff, a nice mix of electronic and rock elements, and the extension over the short OST version allows for some nice new soloing and a new bridge as well that is great. Overall it’s a wonderful track, and it’s wonderful that this full version of it is available too.

From here all tracks are performed by Kiyosuke Himuro, and did not appear on the original OSTs in any form. Himuro has a more typical nasal male J-pop star vocal that may not quite appeal at first to some listeners, but he fits the songs pretty well and sings emotionally. “STILL THE ONE” is a moderate tempo track that has a strong chorus and a good melody. It’s perhaps a bit longer than it needs to be with its extended instrumental outro, but it doesn’t drag the track too much. The later “Wild Romance” is more upbeat and positive J-Rock, with a hopeful melody fitting for an adventure. That melody isn’t as strong as those of the other tracks, but the song is alright overall.

The remaining tracks are all slower ballads, and they’re all quite good. “So Far So Close” starts with just some warm strumming before Himuro comes in softly. The verse melody is wonderful, and Himuro makes the most of the shaping of the line to give it emotion. More instruments come in later, and there is soloing at a bridge as well. A perfect candle track for a rock concert. “Eien -Eternity-” is more pop in style, but Himuro again helps the verse melody shine. Some uplifting strings support the band here at the chorus. I do think that perhaps another vocalist with a more steady singing style would have better suited the track, but it still manages another great moderate track. “Damashii wo Daitekure” sticks just to acoustic guitar accompaniment. The slight echo effect seems a bit much, as I would have preferred a more organic sound to match the style of the song, but it is still emotional and effective. “Diamond Dust” brings the strings and band back for another more positive track. Merely more of what we’ve already heard by this point on the album, but nevertheless solid and a pleasant wrap-up for it.

Yakuza 5 Featured Songs is a great little album with strong vocal songs and a cohesive sound. The main theme by GOSPELS OF JUDAS is one of the more unique themes to appear in video games thanks to its vocalist, and it’s got great melodies to boot. Kiyosuke Himuro does well on the remaining tracks, less unique in vocal but still delivering in performance thanks to controlled singing and a saturation of emotion. Although the tracks aren’t necessarily groundbreaking in style, and despite not even being even prominently featured within Yakuza 5, they do carry part of the spirit of the game with them, particularly the story and character side of the Yakuza series. It’s also priced quite cheap as far as Japanese music goes, and its lean run-time helps bring me back to listen to it in full quite often. Not only fans of the game, but also J-Pop and J-Rock fans in general would do well to check out this album. 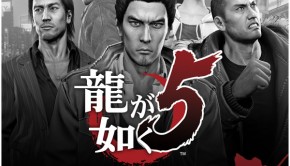