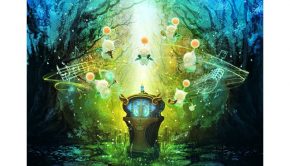 Square Enix has announced that it is releasing a blu-ray to commemorate a three-night concert dedicated to Final Fantasy XIV.