Directed by Kenichi Tsuchiya and composed by Ryota Koduka, the The Shin Megami Tensei IV Music Collection is a musical interpretation of what is experienced in the game. The collection was bundled in a pre-order edition of Shin Megami Tensei IV that was released on July 16, 2013. The music reflects the dark unforgiving and sometimes unfamiliar nature of this particular Megaten game. To an unsuspecting listener, some of this album might sound like a sci-fi or action movie soundtrack. But to Shin Megami Tensei fans, this album will bring back a few memories as well as change their perspective of what a Megaten game is and can be.

The soundtrack will pull the listener through some pretty twisted scenes. The whole album is incredibly expressive and each track takes on a slightly different energy and style of music. There are times when the music will space out and drone for a short time. Other parts are exciting and full of action. Whether you consider this a collection of music or sounds, this collection sets a standard for quality video game music. It is arranged in a way that grabs the listener’s attention slowly and cranks up the action as the album goes on, only to cool it down to a simmer in between tracks. Interestingly, most of the tracks are adaptations of classics from the first three numbered titles in the Shin Megami Tensei series.

Based on the title themes from each numbered game, the Preludes start out with what sounds like heartbeats. Beginning with heartbeats is inventive and shakes up the role playing genre’s tendencies of a heavy metal inspired introduction song. These heartbeats are accompanied by piano chords and chime hits that resonate on top of the warped city sounds in the background. I believe the idea is not to walk away singing a melody, but to walk away with a feeling, possibly of dread or remorse for ever taking on this challenge. “Prelude II” represents a similar eerie tone by using piano chords located dangerously below middle C. The listener is then surrounded by different sounding sleigh bells, recorded in a way so that they seem to come towards you, stop, and then slowly disappear… There are many other sounds that give the “Prelude II” a haunted mansion feeling or as if you are lost in some kind of dark factory. The music in the third Prelude picks up the tempo and changes into something more video game sounding with a beat I could tap my foot to. The beginning starts with computer generated drums and soon the bass drum starts hitting harder and feels more like an acoustic bass drum. While the drums jam there is a nasty distorted bass line that carries the attitude of the final Prelude. The guitar sneaks in for the first time in this album with a silky smooth solo that is both tasty and uplifting. “Prelude III” is both funky and heavy all while having a sense of mystery and suspense.

The Hallucination duo is short lived and more melodic sounding than the Preludes. Based on “Law” from Shin Megami Tensei, “Hallucination I” offers relief from the machine like noises in Preludes with calming piano chords and a melody that sounds like it could be sung by a ghost or demon or an altered human voice. Savor this Hallucination because it doesn’t last long and it is a one of a kind track on this album. Even though “Hallucination I” seemed to sooth the listener, by the time “Hallucination II” begins the listener is drawn into a dreamy sounding trance. This is another minimalist sounding track that stays quiet but bubbles with anxiety and tension. It sounds like, well, a percussion ensemble trying to sneak up on you. An adaptation of “Chaos” from Shin Megami Tensei, “Hallucination II” is similar to Preludes I and II in that there is more space, more rhythm and less melody than in “Hallucination I”. There are percussive sounding instruments being played with what sounds like brushes and small sticks in this piece. The glockenspiel, however, sounds like it is being run through some pretty cool effects. Hallucination II ends the first half of the album with a minimal and small sound that dies out slowly and fades into nothingness.

The album up to this point is not weak by any means, but does start out rather slowly. This all changes with the next section, “Overture”. This track starts with the motif of the dramatic bass pedal tones played on the piano. There seems to be a piano or harp melody played underneath the droning bass pedal tone. It then breaks into a rhythmic groove with a string section playing a few tense notes. The action comes as quick as it goes in “Overture” and the listener is thrown into another groovey techno inspired SMT track. “Sdds IV” portrays a feeling of motion and anxiousness I felt while trying to get to the end of the game. My imagination runs wild listening this track. There are no lyrics whatsoever on this album, although it sounds like some effected voices are being panned back and forth throughout this track. These computer altered voices echo as if you are walking through a seemingly deserted town. There are many blips and bops and tweeks and ticks in this track to accompany the dreamy melodies, droning bass lines and punchy beats. A bright sounding synth solo towards the end of “Sdds IV” is floated on top of a groove that adds an attitude that is characteristic of the album. It sounds big and epic much like the game itself. The track diminuendos after the synth solo and ends abruptly giving just a few seconds to soak it all in before the final statement.

What happens next is something to be celebrated. A 9 minute and 38 second organ solo titled “Reincarnation”. There are little to no happy moments in this game and, I don’t think I smiled once playing it, nor did I smile listening to the soundtrack up until the organ solo. Upon reading the liner notes, it seems that “Reincarnation” was arranged and recorded live by Tomoyuki Asakawa. His interpretations of the music were excellently performed in the unique style of the SMT series. There is energy and passion fueling this monster of a solo to the point where it sounds like two people are playing the instrument. I am impressed with the dynamics and expression in this piece as it seems to be both the loudest and softest music on the album. The chords do sometimes resolve to something that sounds like today’s pop music, but those moments are quick and sparse. The energy in the performance never fades and the silence at the end is performed with just as much intent and musicianship as the entire solo.

I have yet to listen to a video game soundtrack with so many diverse sounds and haunting melodies. I can’t say that this game or soundtrack is everyone’s cup of tea. But for those who enjoy the series or for one who is experiencing this game for the first time, the soundtrack helps make the art style come to life. The music helps the gamer become immersed in the post apocalyptic streets of Tokyo. The music portrays the ‘law’ and ‘chaos’ angle of the game, but it is up to the listener to decide which tracks are based on those principles. Overall this album is expertly mastered and recorded. I was impressed with the soundtrack’s ability to portray the feelings and emotions I felt while playing the game. I was on the edge of my seat through my first listening and continue to hear new sounds each time I listen again. Veterans to this series might hear some familiar music while new comers will feel the immensity of this game by the tension created by this music collection. The whole Shin Megami Tensei experience gives me the chills, and I like it. 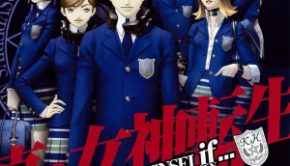