With Press Start 2006 having been a huge success, Famitsu held another concert on September 17, 2007, with the aim of taking it up a notch. The changes were immediately evident upon reaching the Pacifico Yokohama Theater. Not only was the venue nicely situated within walking distance to the Yokohama Ports and other hot spots, but it seated over 4000 people. There were all sorts of vendors selling video game music goods such as CDs and T-shirts, although the programs were conveniently free. To top it all off, we were sure to be in for something new, as the orchestra was to be joined by a soprano, a tenor, a full choir, and a rock rhythm section.

The Press Start 2006 concert last year was the start of a new line of Japan-based video game music events. These new concerts were created to honor and celebrate new and old video game music for the fans that loved them, and to make these concerts a yearly event in an attempt to to re-light a spark of interest in video game music. For them to put so much time and effort into putting on and improving the show, it was apparent that they must really love the art form of game music, which definitely deserves applause.

The first piece on the agenda was from Nobuo Uematsu’s work on Super Smash Bros. Brawl, which was notably more impressive than last year’s performance. Instead of a purely orchestral rendition, a rock section was added with individual solos by the soprano and tenor. This was a powerful opening for the show, and things were definitely looking up right from the start. After the piece ended, the many special guests approached the stage to introduce themselves and say a few words. The new co-host this year was Chisa Yokoyama, who happens to be the voice of Sakura in Sakura Taisen. It was really cool to see her in person, and I was pretty excited that she would be singing later in the evening. Uematsu-san came out next in a summer kimono that made him stand out amongst the other t-shirt-and-jeans clad hosts. 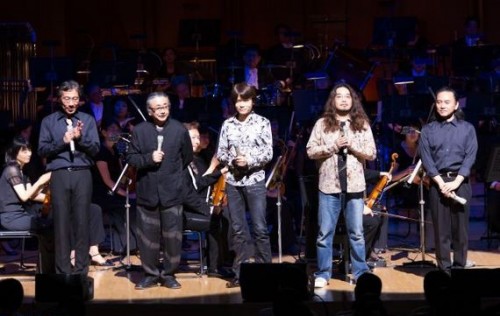 Next they played LocoRoco, which was a fun piece. While the original version had the voices of children singing, the choir took over this time. The piece is addictive, and sounds a lot like swing, which gave the audience a chuckle with its playful nature. The crowd couldn’t help but clap along with the beat. Unfortunately I knew very few pieces from the Shooter Medley that was played next. I did, however, immediately recognize an excerpt from Star Fox, which was the highlight for me. When this gem was played, I couldn’t help but smile and let out a silent cheer. It would have been great if they have givenStar Fox its own slot on the set list, as it is definitely worthy of being alongside Nintendo greats such as Mario and Zelda.

Having heard the piece from Ace Combat Zero for the first time at this show, I thought it was one of the best pieces of the evening. The visuals that were displayed above the stage were looped because the game is so new, but there wasn’t enough footage to last the whole performance. As the soprano began her solo, she was bathed in a green light which matched her green dress. The screen showed two jet fighters soaring in the deep blue sky, giving me the sensation of being spirited away, as if I was soaring in the skies with them over the rivers and streams below. A Spanish guitar segment was implemented perfectly, although the choir was barely audible due to some sound issues, which was quite a shame.

The Fire Emblem performance had me shaking my head in disgust. I’ve always imagined the music in the game to be slow and dramatic based on previous performances of the music from the game, but this arrangement was much too fast to be enjoyable. I think the soprano and tenor were trying really hard to keep up the pace, but it looked as though they were ill prepared. I couldn’t help but think that this was an anime song on steroids. This had to be the “ugliest” piece of the whole concert. After that debacle, I was feeling pretty disappointed. However, when the Sega Sound H team came to the stage, I was hopeful once more. The band really got the audience going, and some attendees even stood up and clapped along to the beat. At the end of their pieces, I couldn’t help but have the goofy “Daytooona” jingle stuck in my head. Apparently, based on his comments later in the evening, neither could Uematsu-san.

Jeremy Soule’s music from Elder Scrolls IV: Oblivion was up next. It was interesting to learn that Uematsu-san had heard Soule’s music at a concert in the United States and had in turn asked him to come to Japan for this show. It seemed assured that Jeremy Soule would be attending, but last minute, he was unable to make it… apparently due to a film project he was working on (although it’s worth noting no film projects are listed on his profile at IMDB). Being a first time listener of his music, I could only compare the scenes and music to other fantasy titles. There were some note sequences that were highly reminiscent of Klaus Badelts Pirates of the Caribbean scores. The music had an epic quality to it: not really bombastic, but quiet and serene, yet suspenseful. There were many tense moments, and they were all beautifully played by the orchestra. The scenery from the game combined with the music put me at ease as I marveled at the artistry of Oblivion.

Next, co-host Chisa Yokoyama performed her signature song: Sakura Taisen. She came out wearing a beautiful black dress with red roses, and full of energy. I enjoyed her on-stage dance movements and images of cherry blossoms raining down on the screens. The final piece of the evening was a Kingdom Hearts Medley, and was my favorite piece of the evening. I had my fingers crossed, hoping they would include “Another Side” in the arrangement, but it sadly wasn’t included. “Transverse Town,” however, received a smooth jazzy rendition similar to the original piece, which I happened to like a lot. “Hikari” both opened and ended the medley, which was expected, given the popularity of the song on the original score.

I had wondered what they would play for the encore since it had not been previously announced. However, as soon as the first few notes were played, it was immediately apparent that they were playing the same Legend of Zelda medley that they played at the 2006 show. While this was a repeat from last year’s program, it was still just as enjoyable as the first time. It started with the main theme in all its majestic glory before transitioning into a frenzied version of the “Dark Overworld” theme from Link to the Past. Although the solo violinist flubbed a few notes in “Zelda’s Theme,” the vibrato still conveyed the love, pain, and sadness housed within the music. Other pieces, such as “Hyrule Field”, were included, and it was really a fantastic performance.

After we thought it was all over, they surprised us with a second encore. It was none other than “One Winged Angel” from Final Fantasy VII: Advent Children. While the orchestral version of the piece has been played numerous times all around the world, I was excited when Uematsu and his Black Mages filed out onto the stage. While they were prepping, Uematsu jokingly started singing, “Daytoooooooona,” which drew chuckles from the first few rows who could hear him. The visuals from the film were nicely done, and the Black Mages performed masterfully. The choir was again drowned out by the speaker system, but it was still a great ending to the show.

In closing, there was a mixture of both good and bad for this performance of Press Start 2007. It was great that they added screens this year, as they were quite effective in heightening the emotional content of the music. Also, a questionnaire was available to guests to allow them to pick pieces for next year’s performance, which really demonstrates their dedication to pleasing the fans. Uematsu-san’s enthusiasm was also a highlight of the evening, as it showed his continued love and dedication to the art of video game music. While there were a few sound issues regarding the choir, and a couple missed notes in various segments, I heard some people complaining that the addition of drums, choir, and the rock band made Press Start more of a spectacle than a pure musical event. This is a matter of taste, however. Some of the video segments were also inappropriate for the given piece being played, and were just straight out lacking in some regards. I didn’t even bother mentioning the Super Mario Bros. piece because it was so disappointingly short at about two minutes in length.

Overall, however, I enjoyed myself, and realize that no live event is perfect. The real joy is actually being able to hear my favorite video game music arranged and performed live. Listening to the pieces that were from games I hadn’t played before made me realize the advertising potential these events present, as I would definitely consider buying some of these games solely based on the awesome performances that were featured at the show. Hopefully they’ll fix their little mistakes and push the envelope even further at the Osaka show and even next year. Until then, I’ll watch out for Press Start 2008; I hope I can get those front row seats next time.