On September 14, 2003, Nintendo hosted the Mario & Zelda Big Band Live at the Nihon Seinenkan Hall in Tokyo. It featured performances of Mario and Zelda favourites arranged for big band, acoustic ensembles, and soloists in jazz, latin, bluegrass, and other styles. It also featured talk sessions between host Ashura Benimaru Ito and Nintendo favourites such as Koji Kondo, Kazumi Totaka, and Shigeru Miyamoto. The concert was recorded both for a commercially available CD release and a bonus DVD release included with Nintendo Dream Vol. 101, the latter which is the basis of this report. Although a wonderful tribute to the two series overall, it’s not always a flattering experience, especially for Westerners.

The DVD opens with a guitar performance of the Super Mario Bros. main theme. The arrangement effectively presents the main melody while giving it a rustic edge on the semi-acoustic. The performance by Nintendo artist Ashura Benimaru Ito is enjoyable and even inspires the audience to clap along. However, he has such eccentric and smug facial expressions that it is uncomfortable to watch. Unfortunately, Ito is the host for the rest of the event and generally comes across too weird even for my tastes. He introduces one of the two main ensembles of the evening, the Tokyo Cuban Boys Jr., a big band dressed in vivid colours. The trumpet and saxophone sections open the performance by performing the “Super Mario 64 Opening Theme” in unison. While this should have enpowering, the sections suffer from major intonation problems and the effect is even more blaring than expected. Fortunately, their subsequent performance of the game’s main theme is much better; the Latin vibe really suits the series and the alto saxophone lead brings all the lyricism out of the main melody. It’s a pretty straightforward playthrough, but things are get vibrant with the trumpet punctuations, saxophone solos, and percussion breaks. The only problem? The absolutely cringe-worthy dancing of the conductor throughout the performance. 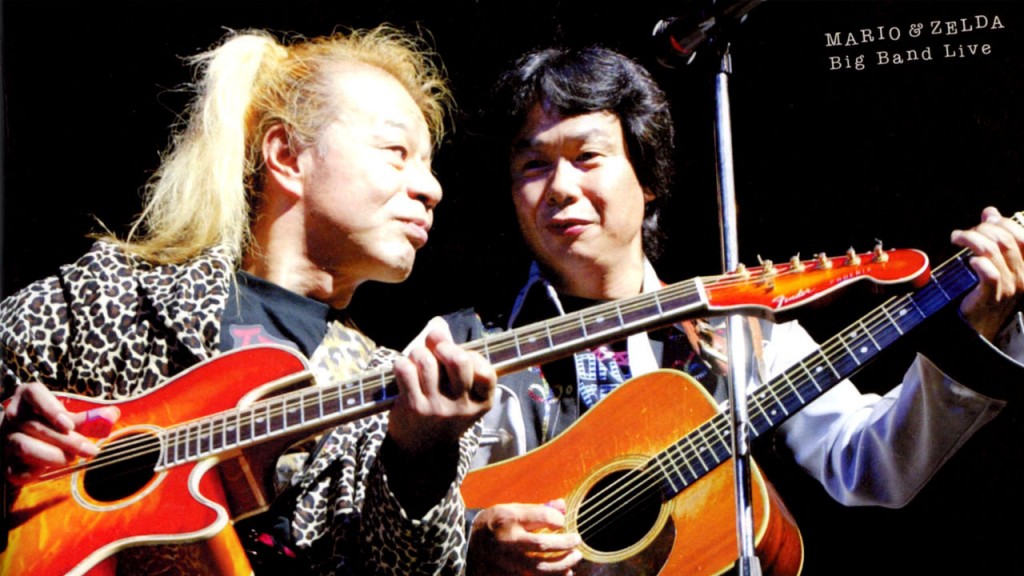 After an introduction shy series’ creator Koji Kondo, special guest Shigeru Miyamoto is brought to the stage, guitar-in-tow. The big band subsequently perform a medley of the Super Mario Bros. score arranged by Kondo himself. Much of the medley focuses on the series’ main theme being intersynched between the xylophone and saxophone. However, there is a nice interlude into the waltzing underwater theme and a percussive section dedicated to the underground motif. However, perhaps the major highlight are Koji Kondo’s solos on the KORG synthesizer; they’re nothing spectacular, but have an warmth and simplicity to them that represents the series so well. There is subsequently a lengthy talk session between Ito, Kondo, and Miyamoto in Japanese. For better or worse, the DVD omits the performance of “Mario Scat Version”, and this is left exclusive to the CD release; the performance was a faithful interpretation of the background music used in Super Mario Sunshine‘s frustrating obstacle courses, which might end up bringing back many bad memories. The concert also featured a vocal performance of the main theme complete with a high-pitched girl screaming “Go! Go! Mario” and other Engrish. The surreal quality is emphasised by a man in an oversized Mario suit bumbling around the audience. It’ll depend very much on the viewer whether they find the visuals endearing or infantile. However, I found the arrangement and performance pretty crude regardless.

After another talk focused on a fourth guest, Nintendo EAD manager Takashi Tezuka, there was a performance of the Super Mario Bros. 3 ending theme. The tuned percussion focus recreates the naivety so inherent to the original and the soprano saxophone interpretation of the melody is beautiful. The brass intonation still would benefit from work, but is generally tolerable, and the conductor fortunately dances a little less here too. All in all, a pleasant and peaceful break. The novelty continues with a bluegrass arrangement of Yoshi’s Island‘s “Athletic Theme” by the second ensemble of the evening, ‘Yoshihiro Arita and Band’. The violin lead recreates the serenity of the original theme while the banjo, guitar, and acoustic bass backing adds some dynamism. It’s quite nice all round. Ito subsequently introduces Nintendo co-composers Kazumi Totaka and Kenta Nagata to the talk. Totaka subsequent performs a xylophone interpretation of the Yoshi’s Story main theme in duet with a guitarist. It’s quite relaxing with its mild timbres and bossa-nova rhythms, but still manages to entertain with a few improvisation sections. This item defines the musicality of Totaka so well.

During an extended discussion, listeners are treated to a few dabs of Miyamoto playing a sailor’s theme on guitar. He then headlines the performance of the first Zelda theme of the evening, Nagata’s “Title Theme” from The Wind Waker. Yoshihiro Arita’s ensemble is perfectly suited to The Wind Waker’s folky and nautical style. It’s particularly fascinating how the themes for Medli and Makar are interweaved on violin and guitar, while the sinister sections in the central section also bring new depth to the score. The game’s music has never sounded better and it’s enjoyable to watch the harmonious ensemble too. However, perhaps their star performance is “Dragon Roost Island” from the same game. The stummed banjo and guitar performance inspires imagery of the rustic wind-torn island, while the violin lead offers a radiant contrast. While the arrangement and performance is superb, it is a little disappointing that the producers chose to adhere to using the ensemble in a similar way once again, when the introduction of a wind soloist could have been even more novel and emotional. The team subsequently recount the history of the Zelda series and some of the leitmotifs from Ocarina of Time. The first Zelda selection is rounded off with a simple but soothing performance of “Epona’s Song” above country backing.

Yoshihiro Arita and Band offer their final main performance of the event with “Delfino Plaza”. It’s initially uninspiring to hear the Super Mario Sunshine favourite being recounted in a formulaic bluegrass style. However, things gradually pick up with improvisations by the excellent violinist and rhythmically challenging parts in the accompaniment. The bass player also goes arco for one section and it’s wonderful to watch. The big band is reintroduced with a lengthy speech by the band leader. Eventually, they offer a recreation of the “Zora’s Band” improvisation featured in Majora’s Mask. This colourful jazz composition suits the band more than most previous entries and both the solo trumpeter and tenor saxophonist shine in their respective solos. More expressive entries like these are essentially for giving the concert a rich core. The band thankfully leap straight into another performance, Ocarina of Time’s “Goron City”. Giving the nature of the original, this one is entirely percussive during the introduction, but is hindered by some awkward instrument choices. The composition is more enjoyable during later sections with the dirty brass and another star saxophone performance. It’s followed by a mambo rendition of the series’ shop theme complete with audience clapping. Though gimmicky, it’s still quite catchy and the flute use is enjoyable.

With the concert approaching its end, there’s still enough time for the youthful Kenta Nagata to play with the instrument from “Goron City”. The final Zelda performance is a big band medley of the music from the series. Unsurprisingly, the focus is initially placed on the title / overworld theme from the original game, to extremely nostalgic effect. However, there is bustling interpretation of the Ocarina of Time overworld theme dominated by brass and percussion. Much like the original, it charmingly calms to give a soothing twilight feel, before the boisterous coda. One of the strangest moments of the night is the subsequently festival rendition of the Super Mario Sunshine ending theme. Fans can watch as percussionists dance, the bumbling guests imitate, and Ito attempts to steal the show. It’s nice to see everyone having such a fun time, but cringe-worthy in retrospect. But that’s not all! Following a glorious audience response, the band performed a special coda, Super Mario 64‘s “Slider”. Viewers can enjoy the three main performers of he night — Ito on guitar, the folk group, and the big band — unite for one last performance. Even Nagata, Totaka, Miyamoto, and the Mario mascot attempt to join along while the audience happily clap away. It’s a good way to sum up and round off the evening in terms of atmosphere and musicality.

The Mario & Zelda Big Band Live event was a pleasant commemoration of the music for the two series. The Big Band of Rouges bring enough flair and energy to the stage to capture the essence of the Mario series and its music. The contrasting acoustic band are well-adapted to the more scenic pieces from the franchises, particularly those from The Legend of Zelda: The Wind Waker. There are also a number of noteworthy solo instrumentalists and vocalists throughout the show, from these bands and otherwise, that offer some of the highlights. In addition to mostly strong performances, the arrangements stand out for maintaining the melodic flair of the originals, yet presenting them in a fresh and dynamic way. There’s undoubtedly a good quantity of offerings as well — some 18 items, all of them fan favourites — thus amounting to a two hour event. That said, the concert might be better to enjoy on CD than DVD. While the music is generally well done, the concert brought with it obnoxious hosts, bumbling mascots, poor stage design, and, worse of all, dancing conductors. While enjoyable, it came across a bit gimmicky and amateurish.