The Monster Hunter Frontier G soundtrack, composed by Hideyuki Fukasawa, is yet another vibrant compilation of wild and exciting pieces to accompany the monster hunting universe. The melodic nature of this particular intallment in the series lends much to the variety of battle tracks that Monster Hunter has, at this point, become quite well-known for. Often with these soundtracks, the battle tracks can run together to become almost indistinguishable from each other, despite being enjoyable. After all, what’s one heavy brass/percussion/wild string piece with a jarring and disjoined rhythm to another? Monster Hunter Frontier G seems to get the balance between these tracks correct by bringing in unusual melodies or instruments that set just enough of the tracks apart.

As usual, the album opens with the main theme of the game, and I found it to be one of the least notable tracks on the album. Yes, the theme is heroic, and it’s a solid main theme, but a generic one. In an album that’s saturated with high-quality battle music, one heroic theme doesn’t do that much, and as nice as “Monster Hunter Frontier G” is to listen to, I wanted to move on to the rest of the album. Much later on, “Monster Hunter Frontier GG” offers an alternate theme – or a subtle variation in the same style – that again served essentially as a speedbump in a fast-paced battle album.

“A Spark in the Darkest Despair” contrasts a single high pipe with a low, rumbling bass series of instruments – emulating the titular theme – but the best part of the track is a series of seven halting chords that bring the melodic pattern to a screeching halt every so often. These seven chords repeat several times in a row, drawing the listeners ear to the lower sections of the bass, so that when the pipe returns, the chords, still featuring prominently far below the pipe, continue to be a source of interest.

“Burning Frost in the Red Moon” is an eerie track due primarily to the vocals and bursts of electric guitar. In some ways, it follows the formula of the rest of the battle tracks, but the combination of the choir and electric guitar set it way apart from the other tracks of the score. It’s a raw and often haunting track – at times, the choir chants in nothing more than whispers, and at other points the percussion and all bass instruments vanish completely to allow for a piercing soprano soli note, just dissonant enough for a light tension without the trademark crunch of clashing notes. The actual melody comes in about two minutes into the piece, joined by a lone guitar at just under three minutes.  I couldn’t tell if I enjoyed this track because of how different it was from the rest of the score, or because of some intrinsic high quality, but I was completely drawn to this piece in particular as being a stand-out battle track.

“Burning Frost” is not the only track that brings in tinges of electric sounds for effect. “Frozen Island at Sea” features what sounds like a synth triangle that plays at a dog-whistle octave. The octave is so ear-piercingly high that the rest of the piece, which is played at a very normal soprano range, feels warm and low, and the gentle violin-and-pipe melody sounds warm and lush, even if they are at the E-string range the entire time. With the exception of some nameless sounds between each loop, the dog whistle triangle is really the only part of the piece that sounds out of the ordinary, but it’s the octave makes it hard to ignore, hard. I was struggling to decide if I liked this piece as a result – the triangle is incredibly disorienting, but I also think it’s a large source of warmth for the main melody line.

The melody that stars in “Winds that Reside in the Valley” is one of my favorites – the piece wastes no time with a lengthy intro like the one behind “Burning Frost” – in just a couple of measures, the melody bursts in. If it were not for the accompaniment, the melody would come across as mournful and haunting, descending with each note and line. Instead, it’s quite beautiful.“Mirage in the Desert” uses a simple chromatic scale for its melody – spiced up with backing chords and large pauses between each iteration filled with drums, wild violin glissandi, and a typical unpronounceable rhythm.

And then of course, there are the less notable but equally enjoyable battle tracks with high-quality melodies that are just as appealing, even if they did not stand out to me quite as brilliantly. “Roaring Ultramarine Armor” opens with a few rising chords, and while the melody opens with a shaky start, as it progresses it seems to become more comfortable with itself and the surrounding harmonies, and each note becomes more drawn-out in length. “To Put Upon Blizzard and Flame” has a much stronger opening, with a murky swirl of chorus and strings that doesn’t quite seem to end. In fact, the piece is all background and percussion until about halfway through, when the choral line finally chooses a progression to follow.

“Former Storm Between Life and Death” has a melody, but a subtle one that only emerges a large percentage of the way into the piece, and really only consists of six notes that, incidentally, form a variation of the main Monster Hunter Frontier G theme. The closing track, “Giant Castle in the Cruel Sands,” is a bit darker than some of the other pieces, and in fact the main melody does not stray too far across the octave. In some ways, this leaves the piece a little dull, but the intensity of the accompanying rhythms and ornamentations is just too fun to ignore.

“Smoked Wasteland Colored in Flowers” combines a bright set of instruments with a wandering, intoxicating melody that doesn’t quite seem to end, instead looping seamlessly due to a few well-placed key changes. The melody is passed around between a solo violin, guitar, and pipe. At times, the violin is echoed an octave or two below by some anonymous lower string instruments, and the melody itself varies between a lyrical structure, soaring arpeggios, and solo lines directed only by the accompanying chords.

“Mezeporta Sun” has a more casual, folksy melody alongside a dotted, strumming rhythm. It is more structured and perhaps more typical of a residential area theme, and I can’t help but feel as though there are missing lyrics to the track. The melody is familiar enough that I can only imagine how long it stays in the listener’s head long after they’ve left the area it’s featured in. The parallel night theme, “Night in Mezeporta,” is a more minimalist version of the melody, featuring just a couple of instruments, with a lot of space between each note. I wanted to enjoy the piece more than I did, as I’m generally in favor of a stylistically varied track, but I found myself itching to hear the battle themes again, or at least the Mezeporta day theme, which had more movement in addition to the same melodies.

“Prayer of the Heavenly Maiden” introduces yet another unique style for the score, alongside “Altar of the Raising Light.” Both pieces use a glowing, ambient sound with a few characteristic twangs to ensure the rest of the score bleeds into these tracks. “Prayer” incorporates a bit more motion, with a barely moving, wavering melody, whereas “Altar” really has no melody at all, instead featuring a few choice chords held out for massive stretches of time (relatively speaking, as the track is just under two minutes). A single note stretches across the entire piece, binding the chords together.

While certainly not every track meets the same standard, I found this score to be a step forward in the recent slews of Monster Hunter music. The depth of melodies and the variation of musical styles and instrumentation in the score was surprising and very welcome, and for the first time in several Monster Hunter scores, I found myself pausing to note tracks instead of just letting them all play through, and that in itself spoke volumes about the effort Fukusawa put into varying the different battle themes. In a game that’s all about the hunt, monotony is large potential pitfall for a score that’s required to have such a volume of battle tracks, and Fukusawa was successful in avoiding that issue. The Monster Hunter Frontier G Original Soundtrack may be purchased at CDJapan. 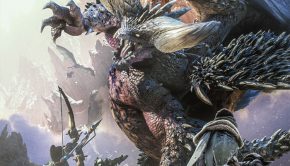