In our review of the game’s soundtrack, we praised the music in-context, but criticised the stand-alone soundtrack. Upon reading our analysis, St. Pierre asked to talk about how he approached the music and how he was forced to compromise for the soundtrack release. In addition to discussing the making of Thief, he also discusses some highlights from his television and film scoring career.

Chris: Luc St. Pierre, welcome to Game Music Online and congratulations on your recent accolades. First of all, could you tell us your avenue for becoming a cinematic composer? What are your major musical influences? 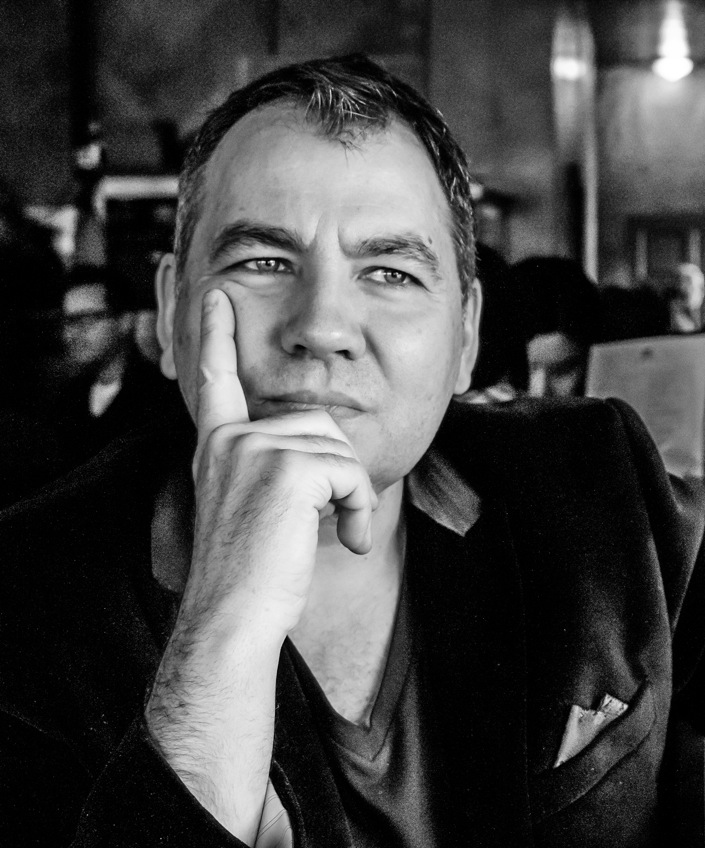 Luc St. Pierre; Many thanks for this tribune and opportunity to talk about my work. After spending countless hours and money in a couple of bands, leading me to produce albums in Europe and here in Canada, I became a sound engineer and eventually musical director. This led me to write music for TV commercials, and writing music for film was just a natural follow up. My years at Université de Montreal were also an opportunity to discover the likes of Shostakovich, Ligeti, and so on. Those would be responsible for the colors of the tapestry in the back of my mind.

Chris: With Thief, you made your video game debut. Could you discuss how you became involved with this game? What appealed to you about Eidos Montreal’s vision for the game?

Luc St. Pierre: I met with Eidos’ Audio Director regarding this new project they were working on… having never done any video games I thought it would be fun to go with a new challenge and so, along with some other composers, I was invited to send some material. Very little information transpired at that moment, except that the score would be ‘dark’ and ‘gritty’; those words made me very excited since we are rarely asked to write dark, gritty music for movies.

Chris: In previous interviews, you said that working on Thief allowed you to “discover a whole new world of possibilities in terms of music styles and also the whole idea of interactivity”. Could you elaborate on both of these aspects?

Luc St. Pierre: There is just more room in a video game for experimentation in my opinion. As the audio director said to me once, turn the heat at 11 and if it’s too hot, we’ll bring it down. This was an image in terms of level of experimentation within the score as opposed to the subtle tiptoeing often asked in a movie. Chris: Indeed, Thief really captures that stealth experience with its shifts from silence to chaos. How did you capture both the ambient and action component of the game? How did you modulate the transitions between the two?

Luc St. Pierre: ‘Dark’ and ‘gritty’ were key words used during the creative process of the music. Orchestral parts were to be used in scripted events and so I had to stay away from any form of epicness. Amalgamating orchestra with more electronic or electro-acoustic soundscapes was a key element to remain dark and in line with Eidos’ vision. I made extensive use of old analog synths but also a couple of more academic tools like Csound for most of the ambience during gameplay.

Chris: The soundtrack for Thief was recorded with the FILMharmonic Orchestra Prague under the experienced baton of Adam Klemens. Could you share your experiences recording the work? What do you feel the orchestral recordings brought to the experience?

Luc St. Pierre: The whole orchestra experience, besides being a tiring one from a jetlag point of view, was a terrific one. There is no doubt that an orchestral mock-up will never hold up to a real orchestra; it’s a shame that our budgets in film and television allow fewer and fewer opportunities to hire orchestras.

Chris: It is challenging to present a soundtrack as dark and atmospheric as Thief as an album. Did you approach writing the music with an album release in mind? Are you satisfied with how Thief Original Soundtrack Director’s Cut comes together as a stand-alone experience?

Luc St. Pierre: Eidos’ idea behind Thief‘s soundtrack release was to give the player the very same music experience as in the game, hence they asked for the titles not to be modified. That said, the music was never written with the release of an soundtrack in mind. So much music was written for Thief in the span of 14 months, yet so little of it ended up on the soundtrack release because it was either not formatted or organized and structured like a stand-alone piece of music. Curiously, there are very few gameplay cues present on the soundtrack release, given they are still loopable and certainly not CD-ready for a more cohesive listening experience.  My personal choices on the actual soundtrack reflect the fact that I wanted the music to at least have a beginning and an ending, notwithstanding that the orchestra could also be heard on most of the cues.

Chris: We highlighted “Uprising” as a particularly enjoyable track on the soundtrack release. Could you tell us more about what inspired this work? Would you like to further explore this type of music?

Luc St. Pierre: “Uprising” was actually a trailer music track that I particularly liked and I chose to put it on the Thief Original Soundtrack to give the listener more variety. If “Uprising” had been written at the very beginning of the whole process, maybe it could have become the DNA of a different score.

Chris: You are a prolific film and television composer in Canada, scoring everything from romantic comedies to crime documentaries to horror films. Looking at these works, what are the biggest highlights for you and why?

Luc St. Pierre: Creative freedom is the leitmotiv of the answer to your question and there is no doubt that Thief is one of the highlights for that reason. The TV series Un tueur si proche was also a very interesting music experiment in a sense that I was given the freedom to do whatever I wanted, as long as I didn’t kill the scene, hence the presence of a dodecaphonic suite, Messiaen mode, spectral music, etc. Not things you would hear on a blockbuster or TV movie.

Chris: Most recently, you touched the hearts of viewers with your score for the Oscar-winning The Lady in Number 6: Music Saved My Life. How did you capture the inspirational story of Alice Herz-Sommer on this documentary? Did you emphasise the importance of music on her life with your own score?

Luc St. Pierre: If you watch the movie, you discover that Alice says it all about the importance of music, so all that was left for me to do was to be with her without interfering and to sustain the emotion. As I’ve said before in other interviews, when your music is preceded by the likes of Schumann and followed by Chopin, you stay calm and avoid writing too many notes.

Chris: Now that you have made your video game debut, it would be interesting to hear about your plans for the future. Do you intend to continue scoring games alongside your film and television works? If so, what types or franchises of games would most appeal to you?

Luc St. Pierre: As you know, I come from a movie and television background, and in the end, it’s all about music isn’t it? So any project that would ask me to be as close as possible to who I am musically is appealing. Then comes the question and the quest of knowing who you really are musically. Have you found your own voice and to what extent can you impose it to a project? I turned down many projects because the music they needed was so far from who I am. And the more I work and, as I grow older, I realise that my music has that melancholy and rage in it that I just cannot seem to be able to get away from. Be it a movie or a game, if it fits who I am, we’ll have fun.

Chris: Many thanks for your time today, Luc St. Pierre. Is there anything else you would like to say about Thief and its soundtrack? In addition, do you have any message to readers around the world?

Luc St. Pierre: I personally asked Eidos to release a composer’s cut in order to give the music a chance to be reworked and heard with a structure and format suitable for a CD. Some of the cues are even loopable since they were taken as is: from the gameplay. Hopefully in the future I will be granted the permission to release a Composer’s Cut with more tracks to be discovered and finally delivered to the public in a way where they can be enjoyed to their full potential.

One Response to Luc St. Pierre Interview: From In-Game Score to Soundtrack Album