Hyperduck Soundworks, the musical duo behind Dust: An Elysian Tale and Kingdom Rush, consists of Irish composers Chris Geehan and Dan Byrne-McCullough. The two have been recognized,  both individually and as a team, for the flexible sounds and styles in both their original scores and their arrangements with various groups including Overclocked Remix.

In this interview, we spoke with Chris and Dan about their most recent work: the soundtrack of Cosmic Star Heroine. The game is a retro-styled RPG with elements of Chrono Trigger, Phantasy Star, and Suikoden. The music synthesizes elements of eighties and nineties game soundtracks with a careful combination of rock, chiptune, and electonica for an energy-packed score.

Emily: How did you become involved with Cosmic Star Heroine?

Chris Geehan: We met Robert & Bill through Dean Dodrill (Dust: An Elysian Tail) way back in 2012. We ended up doing some work for Zeboyd on the Penny Arcade’s On the rain-slick precipice of darkness episode 3 DLC – they really loved it, and we were initiated into team Zeboyd for Episode 4 of the Penny Arcade RPG series! After that was coming to a close, Robert mentioned CSH in it’s barebones, and said he’d like us to join them on the project from the ground floor. It sounded like a great project, so we were on board as soon as the offer was put out there.

Emily: This soundtrack is very different from Penny Arcade, your last score with Zeboyd Games, which had a more traditional indie RPG sound. How did they introduce this very different project to you when you came on board?

Dan Byrne-McCullough: We were lucky enough to be included very early on in the project. As Kickstarter was in the development plan, that gave us a good chance to explore the musical style early on and try to settle on an overall tone. We knew this would be a game of greater scope than any of their previous efforts, and so the soundtrack had to have a similarly broad style. We were introduced with main story elements, mechanics, and Bill had already established an art style which we could identify with.

Emily: Cosmic Star Heroine is advertised as being “the best of classic and modern RPGs” – how did you reflect this approach in your music?

Chris Geehan: We had a lot of help with Robert and Bill on this; they love their RPGs and they love their soundtracks. Zeboyd have a great understanding of what makes a great RPG, and working with them on Penny Arcade assured us that their direction would be integral to shaping how we approached the music. I think the term “the best of classic and modern RPGs” when considered in a musical and sonic context, can be seen as referring to the different levels of energy and tone that exist through these big stories and vast worlds, even galaxies, that you encounter in particular RPGs. Achieving the best of classic and modern for me is a way of striving to pick all the best qualities of our favorite soundtracks, and imprinting the principles of those composers into our own.

Emily: What soundtracks or artists influenced you while writing the soundtrack?

Chris Geehan: Well Robert & Bill are passionate in their craft, like we are. This helped a lot when spit-balling music references (which we did a lot). I think we blended the influences they put on the table with the ideas and references we put forward as well, finding ourselves in a very intricate sonic world for Cosmic Star Heroine; with influences ranging from the likes of Chrono Trigger (that’s a given), to Phantasy Star series, to 90s animes, and 80s blockbuster films. We went everywhere and back, from bouncy 80s synth filled sci-funk to gut-busting action-packed battle music, to the darkest cinematic depths of some of our favorite composers in film and videogames, John Carpenter to Akira Yamaoka; what i’m trying to say is, the list is vast, the influences were all placed within the foundations of our thinking with that tagline in mind.

Dan Byrne-McCullough: As Chris pointed out, we spent a lot of time going through the references and influences with Bill and Robert. Apart from those above, I would say the Blade runner soundtrack is too iconic to ignore. I always think that my early gaming has informed my musical approach more than anything, so that is mainly a bunch of Amiga and SNES games in my case. Outside of that, there are some Jazz Fusion elements to some of the tracks, I’d say there is some Mike Stern influence there being a guitarist.

Emily: The soundtrack has a hugely neighties flair to it (that’s nineties and eighties combined!) that really helps to enforce Cosmic Star’s identity. What specific musical techniques did you use to bring about this sound?

Chris Geehan: Haha! I love that word, stolen for future use. Thank you! One thing I began investing in at the very beginning of CSH was 80s/90s hardware that evoked the sounds of the 80s, and early 90s. I bought (not all at once, over time) a Roland D550, Roland JV-2080, Roland U-220, Korg Triton-Rack, Korg M3M, and I already owned an Arturia MiniBrute & MicroKorg, with some custom patches made on there that, to be honest, were made with the likes of Michael Kamen and Vangelis in mind, to name just a couple.

I think playing around with a lot of these generated ideas from the aesthetics in the initial patches on the synths, and from there we just became more and more familiar with the hardware, what we wanted out of it and how to get it. Other things like slapback delay on parts of the kit and whatnot were used for particular 80s pop kinda sounds. I think what we wanted was a journey through so many corners of the 80s and 90s, both in games, anime, and film, and not just a Newretrowave soundtrack, I don’t think something like that would have satisfied what we were trying to do with the music.

Emily: Were you involved at all with the creative direction of the game?

Dan Byrne-McCullough: Most of the game mechanics and style were already fairly well settled by the time we started working on the music. Though we do try to help out with testing and other things, we didn’t have a direct say in the game mechanics. We may have had a secondary function in the development as we would deliver bits of music throughout the development. I know many developers enjoy getting to hear new music when they contract composers for their game, but you’d need to ask Zeboyd about that! 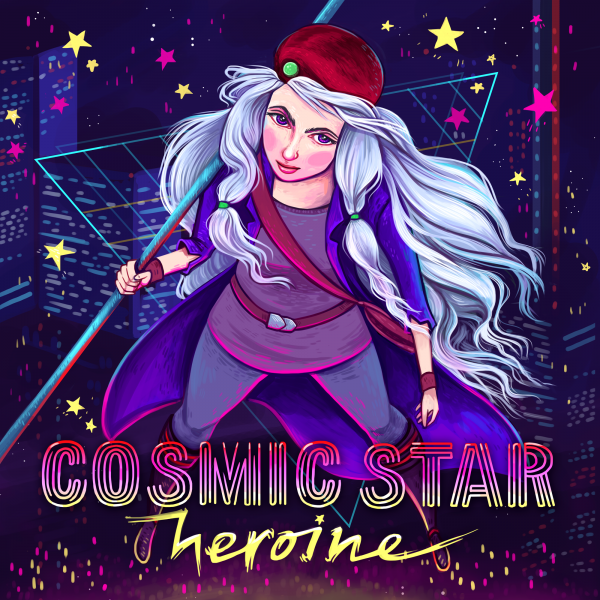 Emily: HyperDuck consists of the two of you – Chris and Dan Byrne-McCullough; how do you divide up the work on a soundtrack like this? The sound is very cohesive; there’s no sense of two opposing musical styles being brought in here.

Chris Geehan: I think Dan & I, having played music and wrote music together for so long now (playing together since 2005, began writing for games in 2007), we’re used to delegating projects between each other. I think we just take it in bitesize amounts, keep the overall vision in the back of our heads, and in this case we never tried to think about the enormity of the project as we went along, since to be honest, we didn’t know how big the final soundtrack would be, in fact it still may increase in size, we don’t know yet. I think we both write in a very reactive manner, meaning we know when and how to follow each others lead on an idea, no good song ever comes from clashing over two good ideas, and I think we’ve always known that, so it’s baked into the fabric of how we work together.

Emily: Although your musical style definitely seems rooted in that chiptune/rock sound that shows up in many of your scores, some of your projects really deviate from this. Dust was a huge success, and I’ve personally been seriously enjoying that haunting Chrono Trigger arrangement you contributed to OCR last year. What would you say defines your musical style or approach?

Dan Byrne-McCullough: It would be hard to box our style into one genre I think. We both love all kinds of music, play different instruments, and take influence from different sources. I think a large part of our approach comes down to the fact that we both love video games, and studied music together for 5 years playing Rock, Pop, Jazz and anything else we enjoyed. As mentioned before, we are always bouncing ideas off one-another. It helps push and pull the music into new directions, which can be exciting for us.

Emily: You’ve got a really cool release in place for the Cosmic Star soundtrack – could you tell us a little about this came about, and what it is?

Chris Geehan: Yeah! We are really pleased to announce that the Cosmic Star Heroine Original Soundtrack will be available for digital pre-order on our bandcamp page from the 12th of September onward. It’ll feature a few previews from the soundtrack to give people a little taster. The release date of the soundtrack will coincide with the release of the full game. We’ve no date from Robert and Bill just yet but we’ll be making a lot of noise about it on all our channels and our newsletter – you can sign up here. 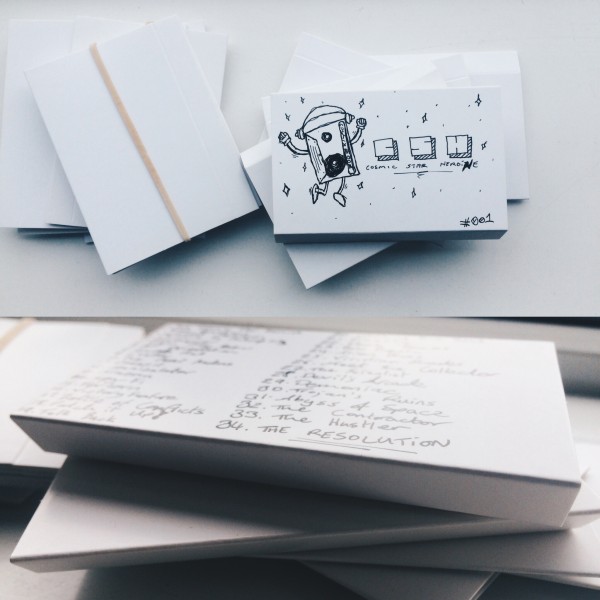 Emily: What else would you like to tell us about Cosmic Star Heroine?

Chris Geehan: So in addition to that, we’re actually releasing a vinyl LP of Cosmic Star Heroine music which will feature some of our hand picks from the full soundtrack. This is being made possible by the amazing people over at Ship To Shore Media. We commissioned the incredible Amanda Appiarius, for the artwork; she is fantastic, and we’re grateful for her amazing talent and Ship To Shore Media’s hard work. A release date for this is not set yet, and pre-orders are not yet available, but again, when it happens, we’ll be making that sweet noise about it! 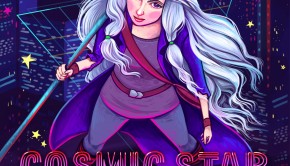 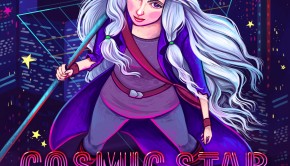