Christopher Tin will premiere his original album The Drop that Contained the Sea at a concert next month. On the evening of Sunday April 13, DCINY will present the concert The Drop of Dawn at Stern Auditorium, Carnegie Hall in New York. The concert will in fact unite a performance of this album with its award-winning predecessor Calling All Dawns. The music will be performed by the Distinguished Concerts Orchestra and Singers International, with solo performances from spectacular singers and world music artists Jacqueline Horner-Kwiatek, Charity Dawson, Saum Eskandani, Roopa Mahadevan, Nominjin, and Nathalie Pires. Tickets for the concert are available from $20 to $100 at Carnegie Hall (box office, website, 212-247-7800). 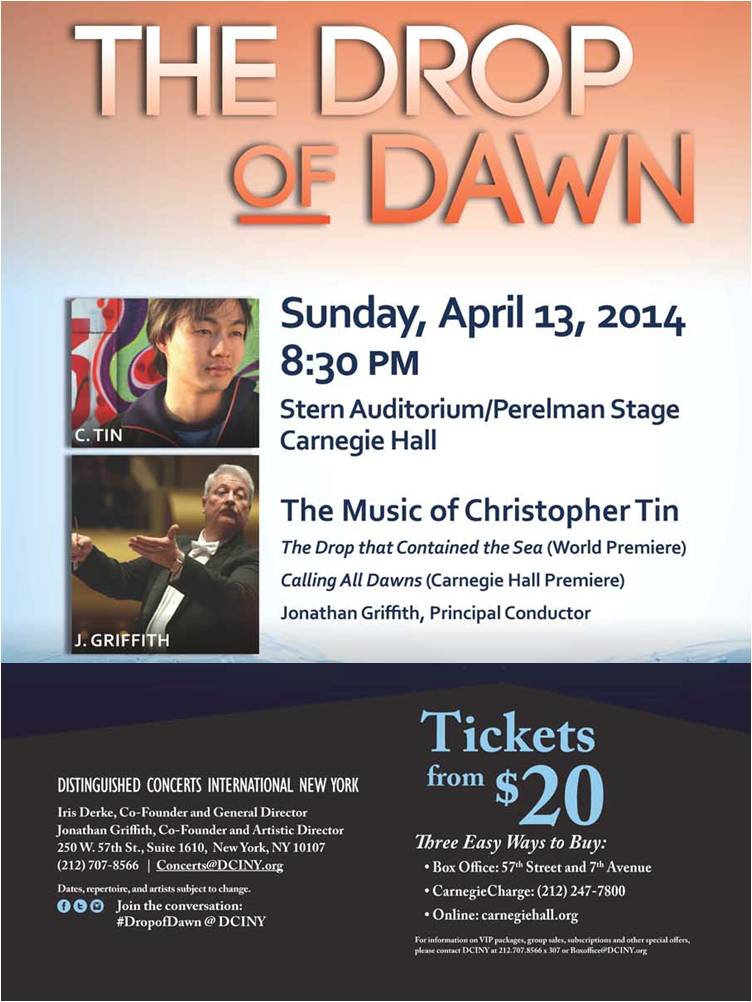 Like its predecessor, The Drop That Contained the Sea is collection of large-scale, multi-lingual choral and orchestral works. Composed between 2012 and 2014, each of the 10 pieces is sung in a different language, starting with Proto-Indo-European, the ancestral root of most modern languages, and spanning out to others including Bulgarian, Xhosa, Sanskrit, and Lango. “The title comes from a Sufi concept,” says Tin, explaining, “In the same way that every drop of water contains the essence of the sea, inside every human is the essence of all of humanity.” Different sections evoke water in different forms, such as clouds, rain, and snow, and are arranged in the order that water flows through the world, from snow to mountain streams, streams become rivers, and rivers pouring into the ocean.

Tin famously won game music’s first Grammys with his Civilization IV theme song “Baba Yetu” and its tie-in original vocal/orchestral album Calling All Dawns. He has since released a surround sound edition of the album and an electronic collaboration album God of Love. The Drop That Contained the Sea will be released on CD and iTunes on May 8, with pre-orders available starting April 13 on Tin’s official site. To learn more about his work, read our Calling All Dawns concert report and our recent
interview with him.