Doujin: a group of people or friends who share an interest, activity, hobbies, or achievement.

While this is the formal definition of the Japanese term, more often than not, it refers to amateur, self-published works such as manga, video games, and music. The doujin scene is a very large part of Japan. Each year, many aspiring artists publish albums, artwork, and even video games that are usually released at comic conventions and other various niche events. In terms of music, many of these artists arrange music from their favorite video games or video game musicians in a variety of styles and peddle their wares to the public in hopes of becoming recognized. Doujin music is often frowned upon by game companies and regularly results in copyright claims. However, some video game musicians nonetheless participate on some of these albums. For example, Manabu Namiki arranged music for a semi-official album entitled Psyvariar The Mix as a way to arrange outside of his normal publishing medium, while Technosoft veterans Toshiharu Yamanishi and Hyakutaro Tsukumo are part of a major unit. The purpose of this editorial is to get your mind thinking, “Hey, perhaps I should try to find some doujin works of my favorite series?” If by the end of this editorial, you do just that, I’ll consider it a success.

So what kind of music gets the fan arranged treatment, you might be asking to yourself. Well, of course there are the staples, such as Mega Man music and RPGs. Growing up as a kid, I always enjoyed music from the Mega Man series. Perhaps the most famous of all Mega Man tunes, “Dr. Wily Stage 1” from Mega Man 2, does get a lot of air time. Those familiar with the original know how popular it is given its extremely catchy melody and fast pace. How do some doujin artists interpret this piece? On one hand, you have Reece Howard’s version, from Megaman XXL, entitled “The Doctor’s Crib”. This piece is a very mellow, laid back electronica arrangement that features some nice layering. In a completely different direction, we have “Dr. Wily #1” from TAKA in the Megalomania album. Unlike “The Doctor’s Crib,” this version is speed metal. It keeps the energy of the original and amplifies it through the use of electric guitars. It’s quite a nice treat for fans of the original pace. A lot of other doujin arrangements feature a similar style, though they can become generic.

Another series almost everyone knows is the Final Fantasy series. At one point, this was probably the most popular source for doujin works. One of my particular favorites is from a group called Preludio. It’s an arrangement of “Chaos Temple” from Final Fantasy. Featured on their Preludio – For All You Final Fantasy Lovers album, “Temple at the Bottom of the Sea – Chaos Temple” is a fantastic piano and rock version of the classic chip tune. However, don’t think that just the classic Final Fantasies are the only ones to get the arrangement treatment. Magical Trick Society, more prominent doujin arrangers, have arranged a variety of famous titles, but the one that stuck out the most with me was their mini-album Over the Sky -Final Fantasy XII-. There are a variety of arrangements, ranging from rock to electronica, but the arrangement that stuck out the most for me was the arrangement for “The Royal City of Rabanastre / Town Ward Upper Stratum”. Unlike many doujin artists who tend to update the originals with updated instruments and sound, their arrangement of this town theme took the colorful Hitoshi Sakimoto town theme and turned it into a classic chiptune piece. I found it translated quite well and showed that chiptune music could still be quite awesome.

The Etrian Odyssey series, despite being fairly new, also sparked quite a few doujin albums. For example, Golden City Factory created a doujin album full of battle theme arrangements from the series. Entitled Sekaiju FIGHT – Ready GO! – Sekaiju no MeiQ Remixes Album, it features a variety of styles. One arrangement that caught my eye was of “Battle – Ecstasy”. The original was a high paced and chaotic battle theme that was reminiscent of the early days of first person labyrinth RPGs, such as the first Phantasy Star. In their arrangement, entitled “Iron Flower – Ecstasy”, they transform the piece into a nice industrial techno piece with some awesome synth leads. It’s a nice refreshing change from the myriad of speed metal doujin albums that seem to come out.

Another group I just recently discovered was Aether. Their first Etrian Odyssey album Yggdrasika features a nice blend of styles. However, their arrangement of “Town – The Roadside Trees Outside the Window” stuck out the most. Also entitled “Town – The Roadside Trees Outside the Window”, the arrangement takes a very calming theme and transforms it into something even more pensive with the inclusion of some beautiful woodwind and piano passages. You might be asking yourself right now, “A lot of these doujin arrangements are something that you might hear on an official arrange album. Are there any arrangements that are a bit less mainstream?” Well, of course there are! Saving the craziest for last in this series, we have a prominent group called IOSYS. While I’m not entirely sure what album this is from, as I have only heard this arrangement on YouTube, it takes “Battlefield – A Sudden Gust of Wind Before Your Eyes”, a fairly repetitive orchestral type battle theme, and transforms it into an hilarious techno driven piece. Here’s a link to the English subbed YouTube video and it includes references to many other things, such as Cho Aniki!

But surely, platformers and RPGs aren’t the only things that get arranged, right? What about the countless other genres? While I can’t get into every genre, I’ll mention a track from a well known racing game as well as from a shmup. If you grew up with the SNES, odds are you have played F-Zero at one point or another. Despite its age, it still has some of the catchiest racing music to date. Arguably the best stage theme in the series, Naoto Ishida’s “Big Blue” is an action packed theme that boasts one of the catchiest melodies of the 16-bit era. I’ve now mentioned quite a few doujin artists with varying degrees of prominence. However, perhaps one of the most prominent doujin artists, Saitama Saishuu Heiki, has yet to be mentioned. Saitama Saishuu Heiki has done a variety of doujins for a variety of series, including Final Fantasy. However, he is so prominent that he also was responsible for the arrangements on the commercial releases of the two Atelier Iris Eternal Mana arranged albums and also composed his own game score for Lost Child. His rendition of “Big Blue” is a fast-paced metal arrangement with some beautiful synth leads and accompaniments.

The last thing I’d like to mention is the shmup genre. For those unfamiliar with the term, shmup is short for “shoot-em-up,” and these can take the form of vertical or horizontal shooters, such as DoDonPachi or R-Type. While I could choose some more prominent series, I’m going to go with a bit of an obscure one here. The Darius series, composed by Hisayoshi Ogura, is known for its wacky themes. The theme I’m choosing to exemplify this is “Adam” from G-Darius. It’s an interesting theme that features a piano lead over some industrial beats and some creepy vocal work. Its arrangement “Adam” by Dangerous Mezashi Cat from the recently released Happy Trigger album transforms it into a nice grungy track. It adds some nice electric guitar riffs while keeping the awesome piano and industrial nature of the original.

So, there’s a small introduction into the doujin scene, complete with samples. I hope this editorial inspired you to try to seek out some doujin albums from your favorite series. You never know what you are going to find. However, the doujin scene is a lot different than it was in years past. Recently, someone in many regards more influential than even Nobuo Uematsu has spawned countless doujin albums related to his music. Who could this be? Well, you’ll just have to wait until next month’s editorial. I will give you one hint though. There is a reason I chose a piano based theme for my shmup representation! In April, the saga continues… 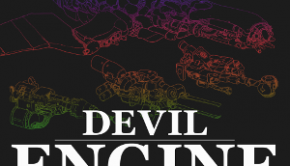