Eminence’s Destiny – Reunion tour features a piano quintet covering music from both games and anime. While Eminence has put on many productions throughout Japan and Australia, Destiny – Reunion recently allowed Eminence to bring a show to the United States for the first time at the Otakon 2007 convention in Baltimore, Maryland. This program has received high praise and success from fans in both Japan (where it sold out in a mere ten hours!) and the United States, so it comes as no surprise that fans were excited about Eminence’s return to Sydney, Australia, where Eminence is based.

While the Sydney Conservatorium of Music concert hall was not filled to capacity, there was a strong turnout of game and anime music fans for the Sydney performance. Before the show, I was able to pick up some Eminence merchandise, which included posters, T-shirts, previously released recordings, and a new CD / DVD album of the A Night in Fantasia 2005 concert which included bonus footage of the 2004 and 2006 concerts. Programs were handed out to all attendees as we filed into the concert hall. The first thing I noticed was the variety of source material featured in the program. I had heard of many of the anime series that were being played, but had not yet had the pleasure of hearing all the music from each of them. As the lights dimmed and the concert finally began, Terence Trenkiem introduced the Eminence piano quintet and informed the audience that taking photos would be allowed for this performance, much to the surprise and delight of the attendees.

The evening was dominated by music from the new Romeo x Juliet anime. It’s no surprise considering Hitoshi Sakimoto himself approached Eminence to perform and record the score. Most tracks made use of the full quintet and were fresh and new, yet still contained the familiar style of Sakimoto’s older compositions. Considering it was Eminence that performed the original score for the anime, their performance was practically flawless. Pieces like “Neo Verona” immediately injected excitement into the air, whereas “Various Thoughts”, in contrast, created an atmosphere of tragedy. Eminence Director and Founder, Hiroaki Yura, performed the solo as the violin first chair, and it was interesting to hear the intricate harmonies and melodies of Sakimoto’s works. The main themes of each piece were alternated between players, overlapping one another, creating a unique texture to the piece, which is a trademark of Sakimoto’s work. 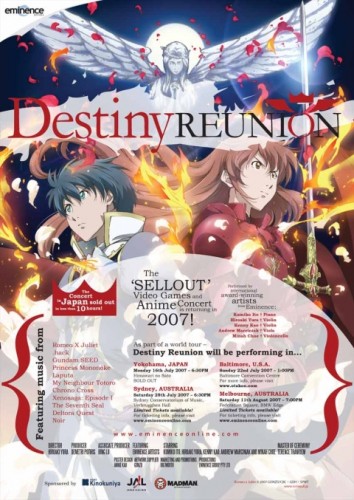 Many of Sakimoto’s other works were also featured in the performance. One of the most memorable pieces was from his latest PlayStation 2 title, Odin Sphere. This was basically a quintet version of the arrangement that was played at Eminence’s A Night in Fantasia 2007 concert. Yura has continued to shine as a soloist, really pouring his heart and soul into his performances. His expression and body language are always a sight to behold, and I rarely see musicians who become so entranced by the music. This is particularly impressive because most Asian classical performers are usually taught to focus more on technique than on musical expression.

As far as other pieces from other games and anime are concerned, “Grandpa’s Violin” from.hack//Liminality was a lovely violin and piano duet. Yura and pianist Kumiko Ito were excellent, conveying both warmth and nostalgia through their masterful playing. “Canta Per Me” by Yuki Kajiura sounded similar to Kajiura’s quintet work on the original scores of both Xenosaga Episode II and Xenosaga Episode III. While not as complicated as Sakimoto’s pieces, they were definitely very emotional, and the performers did the source material due justice. “Beyond the Clouds” from The Place Promised in Our Early Days gave both violinists the opportunity to shine. The movie itself was about two characters that played violin together, and both Yura and Kenny Kao performed the duet with great collaboration and camaraderie, just as the two characters did in the anime.

Some lesser-known Yasunori Mitsuda works were featured, including pieces from his solo album KiRite, Sailing to the World, and Rakugaki Kingdom II. While they maintained Mitsuda’s characteristic Celtic sound, they translated well into the classical quintet model, with heavy emphasis on violin, thanks to masterful arranging by Noriyuki Kamikura and Kimihiro Abe. “Pain” was the same piano solo version fans have heard on the Sleigh Bell published soundtrack Xenosaga Episode I. While the original song was bit poppy and gets more epic at the end, the piano solo symbolized the lyrics about emotional pain. The quiet notes played by Ito were filled with an almost silenced pain. While the original song had lyrics, the piano version was able to evoke the same emotional meaning without the use of words, which is each musician’s goal in the first place.

Destiny – Reunion also featured music from a couple of legendary Studio Ghibli movies, Princess Mononoke and Castle in the Sky. These were the best pieces of the night in terms of technical quality. There were no flaws or “hiccups” in any of these pieces, which is not surprising considering Hisaishi’s works in Asia are as popular and common as John Williams’ works in the United States. In fact, Hisaishi’s works are commonly played by Asian musicians and students alongside their classical repertoire. The emotions conveyed in the compositions were evident in their stunning performance.

Chrono Cross‘ “Radical Dreamers” was the piece I was looking forward to the most. Having heard Yura’s performance of the piece on Eminence’s Passion recording, I knew that Yura’s beautiful violin could more than compensate for the lack of vocals in this version. Later in the piece, Minah Choe on violoncello took over to the main melody, and despite the lower pitch, managed to convey the same feelings of woe in her performance. At the end of the piece, Yura and Choe took the places of the two singers in the original version of the song, creating lovely harmonies that resonated throughout the hall. Ito performed the complicated guitar section wonderfully, and it was definitely a fine accompaniment to the rest of the performance.

Throughout the performance, Yura and Trankiem both told stories about their performance at the Otakon 2007 convention, and how they shared MC duties with Piano Squall, who isn’t well-known in Australia. They also commented that seeing a crowd of people dressed up in crazy anime and game cosplay seated at the performance was truly a site to behold. They noted that they received a rousing response at Otakon, and joked that the audience tonight was “dead” in comparison. This drove the audience wild, drawing huge applause and cheers in retaliation. Yura even told a story about his sheet music being blown off the stand by the air conditioning at the Otakon performance, which was quite funny because Andrew Marciniak had to play a long, sustained note while Yura scrambled for his papers, and it didn’t ruin the performance! There was also the announcement that Eminence is going to record and collaborate on a video game that will be announced at the Tokyo Game Show.

It finally came time for the encore. First up was a completely new Super Mario Bros. medley. Unlike the arrangements that have been played over and over by other touring video game concerts, this one consisted of the main themes from both the original Super Mario Bros. and Super Mario World. It was an exciting and amusing performance, played with whimsy and humor. Ito even managed to produce 8-bit-like sound effects, like gathering coins, by playing high notes on the piano. They ended each theme with the victory theme that plays at the end of each level, and the Super Mario World had the tempo upped dramatically to simulate the “hurry up” music as the timer runs out in the game.

As a second encore, “Time’s Scar” from Chrono Cross was played. Unlike the A Night in Fantasia 2007 version, this was closer to the original in terms of scale. Starting with the Ito on piano, Yura joined in slowly with a melody that sounded like a narrator passing on an ancient legend. The tempo picked up midway through, and it was amazing how the performers got through such a chaotic section of music without percussion to keep the beat. It was a well performed rendition, despite having been played on a much larger scale at the Fantasia concert.

After the show, fans lined up to buy merchandise and an autograph session was held. It was really a special evening, and I think the fact that a friend of mine who attended loved the music despite not knowing any of the music prior to the performance really speaks volumes about the quality of these shows. It was an overall stirring performance by the quintet. There was no big percussion section, no epic choir, and no brassy fanfare; just the simple and emotional music that is an important element in any game or anime. With such an excellent performance, I am looking forward to Eminence’s future productions, including another stop of Destiny – Reunion in Melbourne, Australia and their upcoming A Night in Fantasia – Anime Edition concert. I highly recommend seeing one of these shows if you can, and hopefully with their success at Otakon, we’ll see another show in the United States in the future.