Austin Wintory recently made another big splash in the game music world with his latest score to Abzu, but his original iconic work was the score to Journey. Since then, he has landed some fantastic soundtracks, including Assassin’s Creed: Syndicate, the latest installment of Ubisoft’s franchise.

Earlier this year at MAGfest, attendees were able to witness the premiere of Journey Live, a unique event with one gamer playing through the game on stage while Austin Wintory conducted an ensemble of musicians performing the soundtrack as the game progressed. In this interview, Austin Wintory reflects on recent release of Assassin’s Creed Syndicate and the premiere of Journey Live, just one day after the concert.

Emily: First, in your Q&A during yesterday’s panel, you said that you were asked to do something new for Assassin’s Creed Syndicate – different from what had been done in the other Assassin’s Creed scores, which resulted in that brand-new theme that permeated the entire score. Where did that theme come from?

Austin Wintory: So there’s the theme, and there’s the way I approached it. I think there have been new themes in mostly every AC. They did say that they’d love if I incorporated “Ezio’s Family” from Assassin’s Creed II, but they left it up to me where I did it. They were loose about how I interpreted that – they just said, as a branding theme, long-running fans of the franchise associated that theme with the franchise, but they said I could incorporate it how I chose. Otherwise, they said, obviously, we assume you’ll want to do your own thing. The first question was, “Is there a theme for a Jacob and a theme for Evie?” I said no, I don’t think so, because their relationship with each other is the main character and story arc for the game, and the most interesting story arc. They don’t individually migrate through the experience; as a unit, as a brother/sister pair, they go through the entire game. This makes much more sense to me – one theme that can track that element. 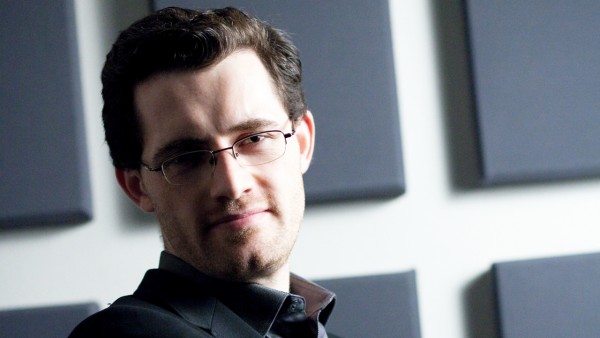 The only point of a theme, in my estimation, is to monitor the progress of a character, or whatever else that theme is supposed to be describing. If they have no progression, then I tend to think there’s no point of them having a theme. I’m not a big fan of the character theme that shows up for that one scene. I don’t understand what that’s serving, although it depends a little on the semantics – how you define “theme.” Regarding overall aesthetic, that’s how I describe it.

Ubisoft said, we’re very excited to refresh the sonic identity of the brand. We want to throw caution to the wind – musically, as well. And I didn’t think they meant it – I’ve worked with directors in the past who have said the same thing, coming out of a long-running franchise, and I’ll take them at their word on that, and I’ll send them an idea, or other music that’s in the ballpark I’m picturing, and then they’ll say, ah, no, let’s actually stick a little closer to the core brand. And I respect that – that’s cool, I have no problem with that whatsoever. Sometimes I’d be perfectly happy accepting a job just like that, because I can find my core voice within my aesthetic. With AC, they really meant that, so I said, okay, this’ll be different, and fun. I write myself a bunch of waltzes and craziness – chamber music, visceral, in-your-face chamber music, and they loved it.

Emily: At the very end of the album, I noticed that’s where you ended up putting Ezio’s theme.

Austin Wintory: Yeah, it’s twice in the game, only one of which appears on the soundtrack – that’s essentially the credits. It’s good to have it in a place that’s a funneling point for the players. I wanted long-running fans of the game to hear me play with that melody, so they’d realize I was knowingly abandoning the prior aesthetic, but out of love for AC. It wasn’t because I thought anybody else’s music was crappy – Brian Tyler, Sara Schachner, or any number of the other composers. It was more just, I wanted to do my own thing. But I respect the love for this legacy. The place it’s in the game where all the players will hear it is on the title screen. After Jacob and Evie complete their first mission, there is a shot of them riding into the sunset towards London on a train, and I quote “Ezio’s Family” right there as the train pulls away. Okay, here’s the theme so everybody can hear it, and now we’re going to move away from that into unknown territory.

Emily: I liked the sort of dance system of the tracks – each of the t